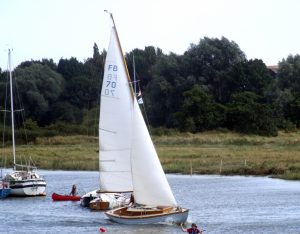 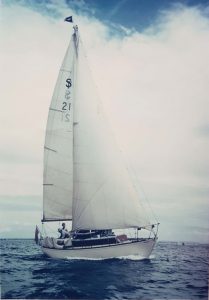 However, they had other ideas and sent me back to school. Sometimes parents have no imagination – although they did upgrade to a 36ft Halbardier ketch. 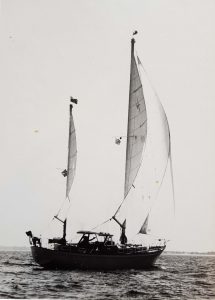 So I left school at 18 with no A-levels. I used the English paper as a vehicle for my earnest opinion that Shakespeare was no more than a reasonably competent hack churning out plays for money. He would not have had time for the sort of convoluted thinking which had kept generations of academics in comfort ever since.

The only problem was that at 18, I had neither a boat nor anything to write about. 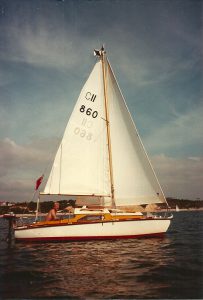 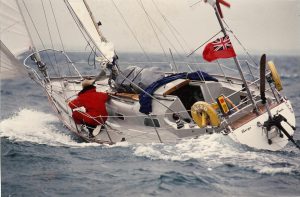 But always, at the end of the voyage, I had to go back to work. You see, as John Lennon predicted, Life had happened to me while I was making other plans.

For one thing, I got married (briefly) at 23 – and then, just as my two sons were growing up and becoming independent and I was getting ready to go,  I fell in love again. Of course, this time it was a little different because my second wife thought she would like nothing better than to bring up her family on a boat.

So I sold Largo and bought a 27ft Heavenly Twins catamaran, Lottie Warren – and five years later, with two small boys, decided that this had been a very bad idea indeed. Everybody hated it – and if everybody else hated it, then it wasn’t much fun for me either. 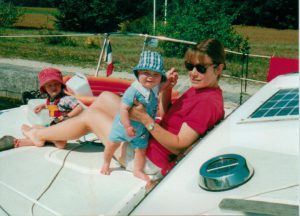 One way and another, I spent the next 17 years living in a house in a small market town on the East Coast, learning to make a living without actually going back to work. I did my best to become a part of the community. This was not a great success. I expect people found me rather odd and distant…

Something else had happened too: I had got old. Not in the sense of gradually declining faculties which is the way most people grow old.  No, I became old at the age of 66 – almost as if someone had thrown a switch. I fell asleep at the wheel and wrote off my brand-new car (ten days old; hadn’t even had a chance to wash it).  If I stood too long in the shower, a patch of skin on my nose would start to bleed, and I would come downstairs with a piece of toilet paper stuck to it…

The most important part about this discovery was that it gave me a new lease of life – a second chance to do what I always wanted to do. In other words, to live on a boat and take her sailing and write about the experience.

It was pure good fortune that at 55, I discovered Residual Income – literally, at a craft fair, I happened to pick up a leaflet that showed you how earn it.  By 68, it was paying me more than my three pensions combined (that’s on the “money” tab).

At last, I could afford to go sailing – and still provide for the family at home.

Tamsin has been brilliant at keeping things together (even to the extent of clearing drains by plunging into them up to the armpit). The  last of the children has flown the nest, although we get together for holidays two or three times a year. Hugo, the youngest, joins me for a week in the summer.

The whole story (warts and all) is told in my book Old Man Sailing which you can find on the “Books” tab.

Meanwhile, this blog continues to chronicle the dream as reality. Admittedly, there are plenty of sailing blogs out there – many of them featuring beautiful young people wearing not many clothes. But I hope this one will appeal to a small but discerning readership.

You can keep track of me on a ship-tracking app (I suggest Marine Traffic). Search for the British vessel “Samsara” MMSI number 232010712

… and there’s another about the boat at: https://www.youtube.com/watch?v=iTYaZo_7AyM