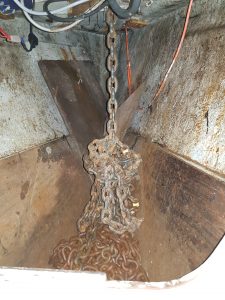 No, it’s not a pretty sight. But this is what I found in the chain locker after I had emptied all the sails out of the forepeak – and the big ball fender – and wrestled with the fastenings of the access hatch … while drifting around outside the anchorage at two o’clock in the morning.

Admittedly, I was drifting around in the middle of Falmouth Harbour so there was plenty of room – especially at two o’clock in the morning.

As you can imagine, I felt pretty smug about being prepared. I knew there was a chance this would happen. I had just crossed Biscay on the coat-tails of Storm Ellen and it was one of the roughest passages I can remember. Despite having the wind on the tail right up until the last five miles, the boat got chucked around so much that the Bluetooth speaker jumped out of the deepest fiddle on the lee-side and hurled itself uphill onto what was supposed to be the windward berth. Then the autopilot hopped out of its supposedly secure stowage and made its way via the navigator’s seat to the floor (it still works).

So, I knew what the chain would be up to. Actually, I could hear what the chain was up to. The best description I can come up with is the sound you get from shooting a load of gravel out of a tipper truck. That is the sound 50metres of 10mm chain makes when it is thrown into the air, turns a slow-motion somersault and lands upside down. Given that it weighs over 100kg, you now have some idea of just how rough a crossing this was. I thought I was riding on Ellen’s coat-tails. Clearly, I was sitting on her handlebars.

Whenever I suspect acrobatics have taken place in the chain locker, I make a point of hauling all the chain I’m going to need out on deck well before I get into the anchorage. On this occasion, it took the usual jiggling at ten metres, a good yank or two at 20… but at 30 metres, the chain would not budge at all. No wonder, when you look at the knot it had got itself into. Normally the solution is just a matter of taking the weight off and giving it a good shake. This time I had to pick it apart as if it was a shoelace.

So, perhaps now is a good time to recant all my previous advice on how to stop the chain piling up in a pyramid so that as soon as the boat heels, it falls over and jams itself.

That is not a chain jam. A chain jam is the result of the normal laws of physics in action. All the same, I did once buy a traffic cone (no, I did not steal one off the road, I went to Toolstation and bought one). The idea was to cut the top off it and bond that into the floor of the locker so that the chain would be disposed around it.

This did not make the slightest difference.

The next idea was to create a slope for the chain to slide down in an orderly fashion. I painted a plank and wedged it in place – and, I must say, this worked very well for a year or so. Once the paint wore off, the chain stopped sliding and started its pyramid on the board – meaning that the top reached the deckhead and blocked the hawsehole so the last few metres wouldn’t go down at all.

Anyway, neither option defied the effects of a really rough sea. I imagine nothing will. This is just something we are going to have to live with – like foul-weather clothing that becomes porous after two seasons and fishing boats that turn off their AIS.

I would like to introduce you to my bean sprouts. I would give them all names if this wasn’t a proper farming enterprise in which sentimentality has no place. Anyway, they’re destined for the pot after three days so there’s hardly time to get to know them as there would be with chicks or piglets.

This is the final piece of the self-sufficiency jig-saw – that is to say, I am now able to survive without going ashore for a hundred days.

I carry 230 litres of water and can get by comfortably on 2.2litres a day.

I bake my own bread once I’ve exhausted the astonishing longevity of Kingsmill’s 50/50 sliced variety. The boat is full of canned beer and tinned food – and, of course, Pink Lady apples seem to have discovered the secret of immortality.

That left only two essentials – salads and fresh vegetables.

So, welcome to mung beans.

You may remember that on the self-isolation cruise back in April and May, I complained that these refused to germinate after three years – they just went a funny colour and started to smell. Now I have a new bag. In fact, the smallest I could find in the Amazon store was 1kg which seemed an awful lot considering I need only a tablespoonful a day – and not every day at that.

I have three little plastic pots with 2.5mm holes drilled in the screw tops. A spoonful of beans just covers the bottom of the pot. Soak them for 24 hours and then drain the excess water into yesterday’s pot… and from there into the one started the day before that…

It’s perpetual motion. In three or four days, that tablespoonful which just covered the bottom of the pot will be filling it right to the top – even poking its little pale green tendrils through the holes in a bid for freedom.

Bean sprouts are, of course, full of all the goodness you would get from lettuce or broccoli so I souse them in salad dressing or throw them in the pot at the end of cooking. The best thing about this is that there is none of the guilt you get with lobsters – all that screaming…

But the greatest discovery is that they are just as good a gherkins in my trademark mayonnaise, gherkin and HP sauce sandwiches. The problem with gherkins is the bulk and the weight of all those enormous jars. Bean sprouts taste just as good and you still get that satisfying crunch with the first bite. Also, they’re always fresh so they don’t go soft over time.

Flushed with this success, I plan to branch out and experiment with alfalfa sprouts. Meanwhile, I hope this has been useful. I had thought of telling you why I am sitting in a ria in NW Spain instead of with the family in Portugal but that seemed pretty dull stuff, full off complaints about quarantine regulations.

But bean sprouts… you have to admit it: Bean sprouts are exciting… 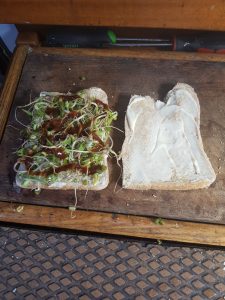 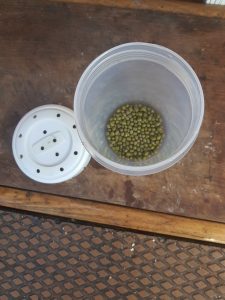 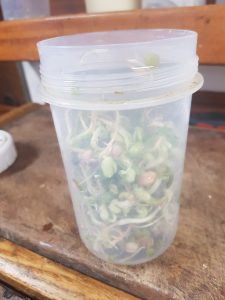 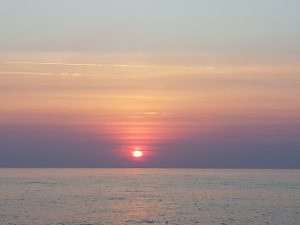 Preston is back in Lockdown, more face-covering regulations are about to come into force for the rest of the country. I’ve had enough of this. I’m off.

I’m supposed to meet my family in Porto in ten days. There’s a following wind. I could be there in five.

The question is: Will they be there to meet me? At the moment anyone returning from Portugal has to self-isolate for 14 days – and they have jobs and studies to go back to.

Me, I don’t have to be anywhere and quite honestly, I’d rather be elsewhere.

So here’s the plan: As soon as a new pump for the galley arrives (delayed by fog in the Scillies) I shall head south, get close enough to the Portuguese coast to make a phone call and find out whether the holiday is on or off. If it’s off then the last thing I need is marina fees, paperwork and all the tapas bars closing at 8.00 p.m.

There are no COVID regulations in mid-Atlantic. There is, at the moment, an enormous area of high pressure so I could find myself spending the next month sitting in the cockpit with a sunhat, a cold beer and a good book.

I’ll let you know how I get on.

15 Responses to Here we go again.

Well, that’s it. The book is finished. After my ten minutes of fame on the Jeremy Vine show, his agent contacted me and said he was convinced there was a book in it – if only he could get in the shops before people stopped talking about Lockdown and moved on to the next big thing (Brexit again?)
Anyway, two weeks of sitting in front of a screen for twelve hours a day and it’s done – sent off, out of my hands now.
Tomorrow I shall say goodbye to St Helen’s Pool and move down to St Mary’s where, hopefully, a new pump for the galley will have arrived and I can top up with a few fresh stores and then the forecast looks good for leaving for Porto at the weekend.
Meanwhile, you will find there is a new page on the blog: Cheap Watermaker. I have always wondered why these have to cost £1,000 when the technology has been around for years. It would have been a great comfort when I was down to eleven litres and a few cans of beer.
But now someone is making one for less than £100. You can see it at on the tab above.

10 Responses to That’s done, then.