If you buy an old boat, the chances are you are going to buy an old anchor.

I happen to think it’s something to get excited about – the fact that my “new” boat, Samsara, is 44 years old. At that age, a boat is ageing gracefully and improving in those important ways that people so often ignore – steadfastness, dependability…

Since I have been telling people that I have bought a Rival 32 again, I have been overwhelmed with comments such as “lovely boats” and “she’ll look after you…”

And she comes with an antique anchor: A venerable 35 lbs CQR which has served her well through all her adventures on both sides of the Atlantic.

After all, in 1973, the CQR was the anchor of choice for the cruising yachtsman – actually, there wasn’t much choice. That and a Danforth kedge seemed to see most people through most situations. But times have moved on. We now have the New Generation Anchors – and in any comparison test you care to look at, the dear old CQR comes out very poorly. The main problem is that you have to drag it around the anchorage before it will set  – which may have been fine when anchorages were less crowded but try that in the Newtown River on a Saturday night and you’ll be very unpopular.

These days there are anchor manufacturers who claim their product will set in less than a metre.

Besides, the hinge on the old CQR had experienced 35 years of wear and – while there was still plenty of “drop-forged steel” to hold it together – I suspect that the geometry has gone to pot, making setting even more of a problem.

So I did my research and I’ve gone for a New Zealand-designed Rocna.

The next choice was the size. According to the company’s chart, the 15kg would be ample – that’s 33lb. The trouble was, my eye kept sliding across to the next column, the 20kg (44lb). For a 32ft boat, that would be considered a storm anchor.

It is argued that boats heading for extended cruising should carry a storm anchor. It is also argued that by the time you realise you should have set the storm anchor, it will not be a very good moment to try and do so. You will sleep a lot better if you know it’s down there already.

So it was back onto Google for more research. This was when I stumbled on advice from the Rocna people saying they discourage going up a size. They had already factored in everything the prudent yachtsman would need for peace of mind.

So I called up Pirates Cave to order the 15kg.

“There’s been a run on them,” said Nathan. “In fact, our supplier – the only supplier in the UK – won’t be getting any until September.”

That was no good. I needed to get the new bow roller measured – and the piece of stainless steel to protect the hull where the tip will rest…

In end it doesn’t look out of place on the bow – and best of all, it might have been made for its passage-making stowage in the fo’c’sle. 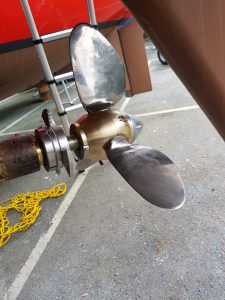 The final payment had just about cleared. There was not a mark on the gelcoat and the first barnacle had yet to think about testing the antifouling.

With a certain ceremony, the new owner removed the colour-coordinated cover from the wheel, spun it experimentally – and then swore as it bounced back and attempted to snap off his thumb.

He tried it the other way.  He tried it both ways. He peered over the stern into the murky waters of the tide-locked marina. Something was preventing the wheel from turning.Now you don’t want to cause a fuss at this point – not as a new owner who hasn’t even made a start on the pile of instruction manuals.  But this was a brand new boat – just out of the box as it were – the wheel should turn… shouldn’t it? The wheel clamp was off, the self-steering disengaged. So what was stopping it?

The owner looked around the cockpit for some sort of access hatch to the steering gear. There were the hatches to the aft cabins, port and starboard, a flap for the fresh water shower on the swimming platform, another for the bilge pump and  – oh, look, here was the cockpit entertainment system… He could blast Rod Stewart into a lovely secluded cove with that…

He did find the head of the rudder stock, neatly hidden beneath a flush-fitting circular cap and he found the emergency tiller under the navigator’s seat – just no access to the steering gear itself.

Eventually, after a rather sheepish phone call to the Sales Department (hate to bother you… sure it’s something really simple… awfully grateful if…) a young man with a toolbag arrived from the yard’s engineering department. He swung himself down into the starboard aft cabin: “No, no trouble at all. Soon have you on your way…”

He swung himself down into the port aft cabin. The owner found him there ten minutes later, sitting on the edge of the double berth surrounded by squashed memory foam and discarded locker lids, talking into his mobile and saying: “No, the headboard’s part of the bulkhead… ”

It was late the next day that instructions arrived from the builders in France: “Cut an access hatch in the stern.”

I was told this story by the shipwright who came to remove my stanchions. You never think you’ll have to remove stanchions, do you? But after 44  years, the wire begins to wear away at the holes, the surveyor takes note and the insurance company insists – even though the wear is on the inside.  But would you believe we took eight of them out – 24 nuts which hadn’t moved in almost half a century.

Oh, we did collect a very nice little pot of screws as headlinings came down, tiny hatches opened in places nobody had ever thought about. In short, we had access.

I like to think that this is because that’s the way they built boats in 1973 but in fact, it has just as much to do with a previous owner who remodelled the cabin in the 1990’s. He screwed a little plaque to the bulkhead to commemorate the work – and very rightly so: He did a beautiful job. He took the boat sailing for years at a time – the Caribbean, up the East Coast of the USA  – and all the while, he was thinking: “What we need is a handhold here… it would be really useful to have somewhere to put a pen-torch you could reach from your bunk – and thinking of bunks, why not arrange things so you can change the width from plenty of room in harbour to nice and snug for rolling down the trades…”

In fact, he thought of almost everything.  What he failed to consider was the possibility that one day his boat would fall into the hands of someone who didn’t want yacht legs.

Yacht Legs are a wonderful invention if you really want to sit on the sand but how often will I want to do that? And think of the room they take up and the astonishing amount they weigh?

So I set to removing the ugly corroded fittings on the rubbing strake. Down came the headlining again, out came the fridge and the fitted lockers.

In the end, it was the safe that stumped me (yes, the boat has a safe). Quite sensibly it was not installed with a view to being removed.

So yes, we now have two small access hatches high up on each side of the saloon.

At least they’re on the inside.