I didn’t expect this when I got up this morning.

They weren’t there when I went over the side on the way back from the Azores. The bottom was as clean as a whistle.

After a lot of Facebook discussion, Poole Harbour gets the blame. Apparently we’ve had so many really wet summers (until this year) that the nitrate fertilizers have been washed straight off the farmland into the rivers and estuaries, dramatically altering the eco-system. And, of course, Poole doesn’t get flushed out as thoroughly as an estuary.

It seems they’re goose barnacles. I’ll have to find a better place to scrape them off, though… 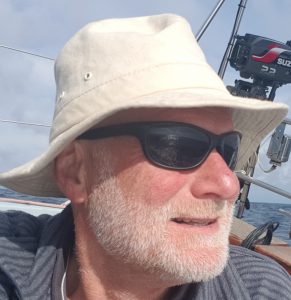 It is with great regret that I have to report that my favourite hat – indeed the one I am wearing in my profile picture, has been lost over the side.

It’s my own stupid fault. I had 20 knots of wind across the deck, it had already blown off once and landed on the cockpit floor (as if to demonstrate that I would get one chance).

But then, if I had heeded every warning I had ever been given, Life would have turned out very differently…

Sure enough, just as I getting the mainsail down at the same time as negotiating the famously narrow and winding approaches to Walton Backwaters (Arthur Ransome fans will know all about this) the wind gave an extra puff and whipped it over the side.

Of course I went back for it but, with the sail half way down, by the time I was able to turn the boat around, the hat had disappeared.

I am very sad. However, I knew this day would come. Indeed, I have been consoling myself by reading the Law of Lost Hats which featured in my Dogwatch column in Yachting World in the 1990’s (and the 1999 collection published by Adlard Coles). I think this puts it in perspective rather well…

To the Fellows of the Royal Society:

I am sure you will be delighted to hear that the borders of scientific knowledge have today taken a giant leap backwards with the completion of the next stage of my work on the subject of lost hats.

You will recall my earlier work, which resulted in the publication of Passmore’s First Law of Lost Hats. In this we examined the complexities of cause and effect which come into play whenever the wind pipes up and someone on a boat puts on a hat.

The breakthrough – which received considerable publicity at the time – came halfway through the first leg of the 1987 Azores and Back Race when the freebie sun visor donated by the race’s sponsor ended up in the water some 300 miles west of Vigo, necessitating the vessel being turned around to retrieve it (three attempts) and providing a rather good excuse for coming last.

My own misfortune notwithstanding, that day will long be remembered in scientific circles for proving that, in accordance with the Laws of Perplexity, the velocity with which I reached for the hat was matched instantly by an equal or greater increase in the wind speed – the ratio, of course, being dependant upon the square of the surface area of the visor’s peak.

Had the weather been less clement and had I been wearing a bobble hat, we now know that the increase in the wind strength could have been calculated just as exactly from the circumference of the pom-pom.

Other formulae relating to a range of headwear, from the chandler’s nylon Breton variety to the heavy-duty woollen affair with earflaps and storm gussets as knitted by the more traditionalist Lifeboat coxswain’s mother, are covered in Appendix XVIII. But the statistical analysis shows that in over 99.8743% of cases, every type of hat is eventually lost over the side.

Further work, I happen to know, is under way to discover whether the new fleecy-type hats also comply with Passmore’s First Law. However, I consider such work beneath me since it is obvious that hats in shocking pink or luminous green fall outside the Laws of Good Taste and therefore need not concern us.

This brings me to the establishment of Passmore’s Second Law of Lost Hats. This work deals with the relationship between the hat and the main or genoa sheet. It is, of necessity, a wider-ranging study by virtue of the fact that in aft-cockpit yachts it is the mainsheet which flips the hat over the rail, while in centre-cockpit designs, the genoa sheet emerges at the top of the table of probability (Appendix XXVI Sheets, guys, halyards and washing lines).

I was prompted to this avenue of inquiry after acquiring a centre-cockpit vessel after many years with the other type. In the past it had seemed that only spectacles exhibited any form of magnetism for the mainsheet. But, as will be appreciated from an understanding the Principles of Exasperation, only expensive prescription spectacles vanish in this way. Cheap plastic sunglasses, particularly the type bought in seaside postcard shops after leaving the Ray-Bans on board, go on forever.

Hats, however, are another matter and the study shows that every type exhibits an equal propensity for being caught between tacks and catapulted some considerable distance into the water.

Indeed, my very first outing in my present yacht resulted in the loss of a much-treasured Lacoste woolly hat, which I like to think made me look like the most fashionable kind of New York mugger. It disappeared into Chichester Harbour during the first experiments with my new endless-line headsail reefing gear.

Indeed, it was this endless line, being as short as only an endless line can be, which was the cause of much of the trouble – I mean, the research.

The Theory of Vexation tells us that circumstances such as a rising wind, when the wearer has to lean out of the cockpit to haul on the furling line, puts the hat directly into the path of the threshing genoa sheet.

Classifying such instances over the past year put paid to one Marks and Spencer’s linen peaked cap, two Milletts’ woolly hats, three of Mr Musto’s rather grand double thickness thermal affairs, and an indeterminate number of ridiculous sun hats which were asking for it anyway.

It is interesting to note that replacing the endless line with a longer endless line (which is, of course, an impossibility of terms) did not alter the findings. Indeed, it is now possible to stand in the exact centre of Lottie Warren’s cockpit, hauling on the line, and watch the genoa sheet make a determined lunge inboard to snatch one’s hat into the water.

I have attached some preliminary work on this phenomenon (genoa sheets: Alien intelligence or inanimate abuse?)

I await the comments of fellow Fellows with interest.