This is absolutely my favourite video. You might have seen it before – and you must admit, it’s pretty spectacular: The Hampshire Heater spewing out charcoal sparks as a sort of over-blown indoor firework – and one which definitely contravenes the Health and Safety regulations.

Not only did it set fire to the bunk cushions – leaving suspicious black-tinged holes in the tartan fabric – but also it set off the carbon monoxide alarm so that I had to take out the batteries.

I know this is not recommended – but if they made the alarm a couple of hundred decibels quieter, they might save a lot more lives.

Anyway, something had to be done. It was all very well, the heater looking homely anchored off  Lamin Lodge in The Gambia or at party-time in Hogs Bay, Grenada, but back in a UK winter, I was going to need it to work.

On closer inspection, it was never going to work. The whole of the combustion chamber – a caste iron cylinder inside the stainless steel outer casing, was corroded away to nothing. This meant the burning embers could exit directly through the ventilation holes and land playfully on the cushions.

The good thing about charcoal is that it is carbon-neutral (the trees having already contributed to the global-cooling equation when they were growing). However, nobody makes charcoal heaters for boats anymore – not Pansy; not Hampshire.

Now, it’s all Chinese forced-air heaters – the much cheaper version of Eberspacher and Webasto. However,  not only do they use diesel; they also use electricity – and on a short, cloudy, windless English winter’s day in Walton Backwaters, there isn’t much of that about.

I did like the idea of solid fuel. Tom Cunliffe has a couple of hundredweight of caste iron wood stove glowing away in the corner of Constance’s saloon (and another few hundredweight of fuel bunkered away behind the engine). In 32ft, I don’t have the space. It would have to be the Newport bulkhead-mounted thingy.

Twenty years ago, I would just have ordered one. Now, you check out these things on YouTube and, to me, they looked terribly flimsy. Also, a lot of people claimed they were fiddly to keep going and didn’t really put out much heat.

I could see myself cursing it. Besides, I didn’t know where I was going to end up. Samsara’s previous owner wintered his new boat north of the Arctic Circle (with a Refleks).

Ah,  the Refleks; the heater of choice for Danish fisherfolk in the Heligoland Bight. They do a little bulkhead-mounted version – which even comes with the optional extra of a tube to draw in cold air from floor level.

I ordered one. I fixed a date for Lockgate Stoves to come and install it. I even sent a deposit towards the almost £3,000 bill (all those optional extras).

It was only the next morning, checking the depleted bank balance, that I remembered: Having removed the old Hampshire contraption in order to get accurate measurements,  I had taken it to the local metalwork shop – as in: “I don’t suppose you could do anything with this…”

They never called back. I forgot all about it.

It was, as I say, only the depleted bank account that jogged my memory. I phoned them. “Yes, all ready for you,” was what they said.

And it was – welded together inside (or brazed, I wouldn’t know). Anyway, it looked as good as new.

Actually not. After years of being heated until the whole thing glowed, the once-gleaming stainless steel had been burnished to the colour of caramelised toffee.

I rubbed at it with some sort of blue paste that came with the boat. I painted it with a patented liquid that requires rubber gloves and breathing apparatus. In the end, I searched on Google for  “metal polisher near me” and ended up in Hay-on-Wye at a motorcycle restorer who had a machine that blasted salt crystals at hundred-year-old two-stroke engine blocks. They turned my heater into something that looked like an exhaust pipe. In fairness, they had warned me it wouldn’t be shiny; but I hadn’t really imagined the effect of matt grey on a metal cylinder with a pipe sticking out of one end – definitely an exhaust pipe. Still, it was clean. It looked like new (a new exhaust pipe).

And I’ll be carbon-neutral again. One day, I’ll fire it up and see if it works. I’d do it tonight; only I’ve had to move off the boat so they can gut the cabin. At the moment, I’m living in a Ford Transit camper van.

Remind me to tell you about that sometime. The first thing I had to do was buy it a new exhaust pipe… 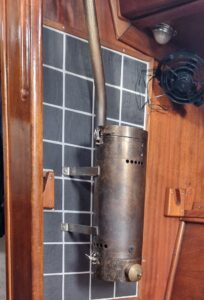 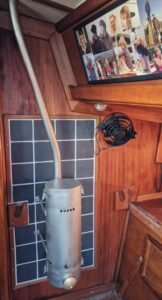 One Response to The heater

Tell me this isn’t weird.

I am in Liverpool. Last night I was in Leeds. I had taken my daughter Lottie out to dinner. She’s in her final year at the University there.

Lottie is named after the little catamaran I capsized and lost 80 miles north of the Shetland Islands five months before she was born nearly 22 years ago.

The boat was called Lottie Warren. We thought it would be fun to call our daughter after the boat – after all, everyone calls their boats after their daughters…

Actually, the original Lottie Warren was a 1,184ton sailing packet built for the Liverpool-Boston run in 1863 by my great-great-grandfather George Warren –  although, researching it now, I see the name was spelled “Lotte”. Anyway, she was scrapped  – the ship, that is – in 1879, according to the Internet.

All of this is leading up to something quite extraordinary, which happened today. I drove to Liverpool, where I am meeting my son Theo who is in his final year at the medical school. Having time to spare, I went to have a look at Strawberry Fields – I’d seen Penny Lane and The Beatles Experience on previous visits and, being a teenager of the ’60s, the song Strawberry Fields Forever is on my Desert Island Discs playlist  (if ever anyone asks).

I had no idea that today the place has a thriving visitor centre to capitalise on worldwide Beatles fervour (people come from Mexico to hug the trees. Blades or grass are stolen). Anyway, it all produces a useful income for the Salvation Army, which has owned it since the 1930s.

When you put on the headphones for your audio-visual tour, the first thing you hear is that the seven acres of grounds where the young John Lennon climbed over the wall and found that “no one was in his tree”, was purchased in 1867 by Liverpool shipowner George Warren.

Obviously, I thought this was interesting – at least to me. In my enthusiasm, I mentioned the family connection when I bought a T-shirt with Lennon’s immortal sentiment that “Life is what happens to you when you’re making other plans.”

Next thing I know, I am sitting over tea with Alastair Versfeld, the Mission Development Officer, who proceeds to grill me on the history of George Warren. I was able to unload the family legend that he ran away to sea aged 16 after some trouble with an under-housemaid, dismissing the coachman at the docks with instructions to “tell the family I shall not be returning”.

Apparently, he never wore shoes on a ship (nor do I, if I can help it). But he rose to master and went into partnership with a Boston shipowner called Enoch Train. Later, he founded the Warren Line, generating the fortune which enabled him to build Strawberry Field with it’s “grand entrance hall, four reception rooms, billiards room and four WCs).

For me, it was a wonderful discovery. 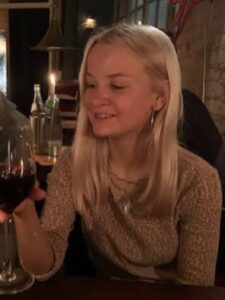