She is my second Rival – from 1983 to 1993, I owned Largo and took her twice to the Azores and once across the Atlantic (in the 1988 Singlehanded Transatlantic Race).

They are not the fastest boats – and they’re not at all good in light airs. But they have a wonderfully easy motion in a seaway, good wide sidedecks for getting around and, to my mind, they just look so pretty, like little birds sitting on the water.

Of course, they are not modern boats. If you go to a boatshow these days, you will find huge cockpits with tables and enough room in the saloon to hold a dance.

But boatshows take place in marinas – or even ashore in exhibition halls. Boats at boatshows do not heel over or bounce about – and their crews do not get thrown from one side of those wide cockpits to the other. They do, however, eventually discover that the only way to move around the cabin when the boat is at 35o is to jump – because there will be no handholds on the way.

Boats designed in the 1960’s – which is when the Rivals started – are rather different. And they were built with one purpose in mind – to go to sea.

And that is why I feel a particular pride of ownership. People walking down the pontoon stop and look at Samsara in the way that people will admire a well-kept vintage car – and invariably they compliment the skipper, which is nice.

And if they turn out to be knowledgeable and recognise a Rival when they see one, they might get invited aboard – because Samsara is no ordinary Rival 32. That is why I fell in love with her in Conwy Marina in the summer of 2017.

First impressions, though, were not so encouraging. Arriving on the evening before I was due to meet the vendor, I checked into the worst B&B in town and took a walk down to the marina to find out what I had come all this way to see. It was not an encouraging excursion. Samsara was nearly 50 years old – and she was showing her age.  The hull was covered in scrapes and dents – the worst of them, repaired haphazardly with gelcoat filler which didn’t match. Around the stem it was clear that the anchor – a rusty 35lb CQR – had been allowed to crash against the bow. The anti-fouling was as thick as a navvy’s jam sandwich – and pitted and pockmarked all over.

I borrowed a ladder and found the decks thick with bird droppings – and not just any bird droppings: It seemed the nearest tree bore some deep red berries of some kind – which went straight through the avian digestive system.

The decks had been painted – and the paint was lifting in places and the rail was made of black plastic which had shrunk, leaving three inches of aluminium showing at each end like the bare leg between sock and trouser.

I went out for dinner feeling I had had a wasted journey.

The next morning, the vendor was there well before our agreed time – hurriedly trying to tidy the cabin – and that was where Samsara began to show what she’d got. It turned out that in her 44 years, she had more ocean crossings than I had – and in the winter of 1995-96, her then owners, a West Country doctor and his wife, had decided they were going to take the bull by the horns and get on and make all those improvements they had been thinking about on those long days rolling down the Trades.

I knew exactly how they felt. During my second trip to the Azores, I had ended up becalmed for three days in the middle of nowhere. I occupied myself by writing down the all modifications I would make to Largo if every I had the time and the money.

I would have a hatch in the coachroof, a detachable inner forestay, a bigger water tank… But the thing I really wanted to do – which was clearly impossible without buying a bigger boat…was to have decent berths in the saloon – wide enough to sleep on. Largo’s were OK at sea, when you were squashed up against the side. But in harbour, the only thing to do was empty all the stuff out of the fo’c’sle and sleep up there.

Of course, if I had company, we could turn the dinette into a double – but now I am now 69 years old and don’t think I need to worry about that any more…

And this was why I had made the trek all the way from the East Coast of Southern England to the North-West tip of Wales: According to the photos on the Boats for Sale website, Samsara did not have a dinette.

During the 1995-96 refit, the Doctor and his wife had completely ripped out the cabin – even to the point of removing the mast compression post and replacing it with a massive stainless-steel RSJ. This did mean that in the photos, there was no sign of a saloon table – but anyway, at sea, there is nothing quite so useless as a table – on long trips aboard Largo I used to take up the floorboards and unbolt it. On the other hand, there are occasions when I might invite guests for dinner – and it would be rather embarrassing to have to ask them to eat out of bowls on their laps.

I needn’t have worried. The clever doctor and his wife had thought up a table that slotted into two tubes bonded into the keel. It was even angled slightly to give just enough room to slide round to get to the loo between courses. 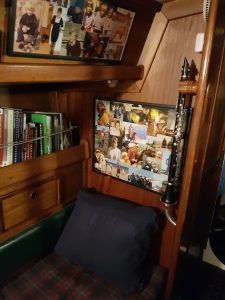 Later on, I discovered you could still have a double bed. They had designed it so cleverly, that you now put it up athwartships (although The Old Man is so adamant he is past all that nonsense that he has removed the supports).

There was much else besides – a lot of it becoming apparent only later as I began to get to know the boat… worked out the reefing system, learned to appreciate the sense of space you get if you have storage in open racks instead of having to look at a row of locker doors…wrestled with the vagaries of the charcoal stove…

And there’ll be more to discover as I go along. I’ll let you know…

24 Responses to The Boat