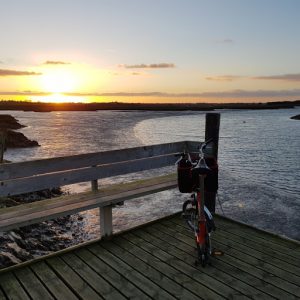 I don’t think I have posted anything about my folding bike. The only time it has been mentioned at all was when it got me lost one miserable winter’s night in the sugar beet fields of Essex.

But in fact the Brompton is just about the best thing on the boat.

Brompton bicycles are very fashionable now – you can see people in Hugo Boss suits carrying them off the Underground at Bank and Westminster. They are certainly expensive enough to be fashionable – you can buy a flashy racing bike for less. But your carbon fibre thoroughbred will not collapse into a bag no bigger than a brick salesman’s briefcase.

Of course, mine was free – but that was 25 years ago when hardly anyone had heard of them – certainly I hadn’t.

I had just announced in the Travel pages of the Daily Telegraph that Tamsin and I had given up our jobs and henceforth would be living aboard our tiny catamaran and exploring the UK from the outside – and there, to illustrate it, was a picture of us doing nautical things – and in the foreground, lashed to the rail, were two folding bikes.

They were early Bickerton’s – a type you don’t see any more. I’m not surprised: Being made entirely of aluminium, the frame would bend as you pedalled along, giving the whole thing the riding characteristics of a bucking bronco machine in a Liverpool pub.

No sooner had the photograph appeared than Andrew Ritchie, the inventor of the Brompton, wrote and said that under no circumstances should I set off on my adventure with a Bickerton. He insisted I would need something much more sturdy – and he would donate one of his own machines.

By this time, Tamsin and I had become rather blasé about being given things. Now that we were in the paper, shoes and clothes and bit of equipment turned up almost daily. Still, a brand new Brompton was a real coup.

Looking at the competition’s website today, it appears that the Bickerton people have caught up – indeed their latest folding bike looks a lot like the Brompton. But it is too late. I am a Brompton convert. I rode it on excursions all round the UK. I rode it on the wonderful cycle paths of The Netherlands where bicycles are the highest form of life. It carried all the shopping, it delivered 20litres of petrol back from the garage. There seemed to be nothing it could not do.

For the 18 years I lived ashore, it was my daily mode of transport around town – even though the family insisted I looked ridiculous and why didn’t I get a mountain bike like everyone else?

The Brompton really is the most brilliant invention and the fact that my 25-year-old bike is very much the same as the latest version, shows you that Mr Ritchie had designed that ultimate rarity, an almost-perfect machine.

I say almost-perfect because I have just discovered the one design flaw.

As I mentioned, you may have read about us (me and the bike) getting lost among the sugar beet – and all the mud we collected under the mudguard (which is why it’s called a mudguard).

Well, a couple of days ago, it occurred to me that there was still an awful lot of sugar beet field bound up in the mechanism and this might not be good for even the most reliable piece of machinery. So I bought an aerosol of special cycle cleaner. You spray it on, wait for all the muck to dissolve and then hose it off. Obviously, the best way to do this is with the bike upside down.

Having never looked closely at my bicycle upside down, I had never noticed that there is a big hole in the bottom right in the middle next to the pedals – just where I was directing the jet from the hose to clear away all the now-emulsified mud. The water gurgled away merrily down the hole almost as if this was a bath emptying.

Of course the hole is not a bath plug at all. It is the open end of the saddle tube – on the other end of which is the saddle … the specially-designed Brompton saddle – a legend in cycling comfort and, more than that, waterproof when rained upon while parked outside the pub… at least, when rained on outside the pub providing the bicycle is upright…

If the bicycle is not upright and you direct a hose straight down the saddle tube, all the water will emerge at the other end and promptly fill up the saddle from the inside.

Now, the reason the Brompton saddle is so comfortable is because it is made from a clever sort of semi-rigid sponge.

And we all know how a sponge and water go together.

It was not until yesterday when finally, we got some sun, that the saddle dried out. In the meantime – well, you will have noticed the title of this post…

One Response to Soggy Bottom 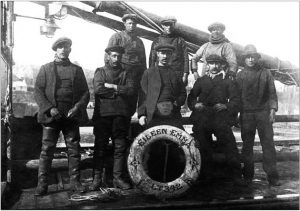 If you wondered why people write sailing blogs, here’s an answer for you:

You get to meet all sorts of useful people.

My friend Jeremy is one such. I’ve never met him, of course. He’s a “virtual friend” – although, we have exchanged an enormous number of emails as he attempted (and finally succeeded) in ordering the health supplement that keeps me going (see the “Good Health” tab above).

Anyway, I mentioned that I had been sitting on a mooring at Felixstowe Ferry for the past 48 hours waiting for a weather window to jump to Lowestoft (tomorrow looks good).

Whereupon Jeremy sends me the following:

Lowestoft – fished out of there back in the 70’s, skippering a 50 foot longliner, Cod in the winter and Spurdog in the summer, together with a bit of trawling.

Bloody horrible entrance with a good ebb tide and a bit of slop. Tide runs hard across the entrance, trying to push you into the north wall, then as soon as you get your nose into the harbour, it pushes your stern around trying to get you to hit the south wall.

They had a massive tragedy there back in the 1800’s. A summer storm came out of nowhere and they lost many lives at the harbour entrance with the sailing boats unable to make it into the harbour before being smashed against the north wall.

All I got from Reeds was: “Shelter Good. accessible H24. Wind over tide, especially on the ebb, can make the entrance lively.”

I said I’d let him know how I get on.