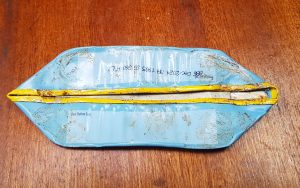 What is it they use to make sardine cans? You’d think they were boxing up nuclear waste, the weight of metal in those things.

Admittedly, this is not something that had occurred to me until I read that the Golden Globe racers were committed to throwing nothing into the ocean unless it was fully biodegradable.

That was a couple of years ago. The real clincher was seeing a YouTube video of the bottom of a harbour in the Mediterranean. It looked like a rubbish tip – completely carpeted with cans and bottles and broken bits of this and that – anything that should have gone into a dockside bin if only anybody could be bothered to take it ashore and dispose of it properly.

To my shame, I had never thought of this before.

My earliest memory of being environmentally conscious was back in the 50s when my father would lean over the side of our Folkboat while holding the neck of an empty beer bottle in one hand and a hammer in the other. He kept the hammer stowed in the corner of the cockpit for just this purpose. The idea was to smash the end off the bottle and let go of the neck without cutting his hands, getting shards of glass on the deck – or dropping the hammer instead (which did happen). When winch handles became detachable he used those instead – with the same sorry result.

Life became easier when Inde Coope invented Long Life Pale Ale in cans: Instead of the hammer, you had a little device which pressed a triangular hole into the top of the can (and a second one on the other side to let the air in as the beer poured out).

The greatest advantage was that, when the can was empty, you could make a couple of holes in the bottom and just toss it over the side and watch it sink slowly into the wake. Father used to say it was a better method of gauging the speed than the Walker log – although he did keep losing the little hole-punch.

It never occurred to any of us that there was anything wrong with throwing beer cans over the side – or any rubbish, come to that. As long as it would sink or make food for the fishes, over the side it went.

There’s a lot about this in The Riddle of the Sands with the skipper, Davies, forever deep-sixing anything he considered surplus to requirements. Back in the 80’s I used to amuse myself in ocean calms by dropping used batteries over the side and watching them go tumble slowly down into the depths twinkling in the sunlight… deeper and deeper…

You wouldn’t do that now. It’s no better than fly-tipping – and I did wonder how on earth those Golden Globe competitors were going to store all their gash for six months (or 322 days in the case of the last man home). In fact, there was a simple answer: As they used the stores, more space would become available for the waste.

All the same, you wouldn’t want to mix the two in the same locker. That’s how, on my comparatively modest six-week Lockdown cruise, I found myself running out of space.

Potato peelings could go over the side of course – and apple cores and onion skins (at least the bits that didn’t blow back all over the deck). It was the plastic packaging and the empty cans that were going to be the problem.

Without knowing it, I had trained for just this moment: At home, I used to get into terrible trouble for being really boring and trying to reduce the family’s volume of waste by chopping up and compacting everything that went into the kitchen bin. In my defence, I was the one who had to get it all into the wheelie bin which, now, is collected only every two weeks.

I became an expert at stamping on empty cans and blunting the kitchen scissors by cutting up ketchup bottles. At one point I became so excited that I went to see a patent lawyer with a view to inventing a kitchen waste shredder – the garbage equivalent of the home-office paper shredder. I still think it’s a good idea but apparently, you can’t get a patent until you have a working prototype. My enthusiasm didn’t stretch that far.

Now, of course, well on the way down the Western Approaches and with nobody to tell me off, I started snipping mushroom cartons into pieces the size of postage stamps and perfected my chopped-tomato-can-flattening technique: Place the empty can on the cabin sole with the base against your right instep. Press down on the open end with your left foot. Do a little dance to shift your feet and use the right heel to fold down the base of the can until it lies on the flattened side – thus reducing the cylindrical can to a single-dimension rectangle in twoeasy steps.

This is all very well for chopped tomato cans – even for the small (and therefore more tricky) sweetcorn packaging. But what about sardines?

The sardine tin is a completely different – indeed devilish – shape. It is not tall enough to enable any leverage from the left foot. It won’t even stand on its side if the boat is moving about.

Of course, you could argue that a sardine can is so small as to be insignificant in the environmentally-conscious sailor’s scheme of things. But I was carrying 49 of them. This provided a certain urgency.

I tried bending in the sides with pliers – then mole grips. I made some progress with the portable vice clamped to the companion steps (but that took longer than lunch).

In the end, it was back to the 50s – to Father’s solution with the beer bottles: Time to get out the big hammer.

This now lives under the chart table and I have developed a system of gentle taps building to increasingly heavy blows in order to fold down the centre of each side: You have to be careful not to hit your fingers and the ridged base of the tin can dent even the most robust workbench (or in Samsara’s case, the chopping board).

With practice, it is possible to get the sides level with the bottom. Then, all that remains is brute force to bash the ends into two compliant points. The whole thing ends up as a sort of kite shape. It’s rather artistic. More importantly, you can get 49 of them into a single gash-bag.

Do rinse them first, though… 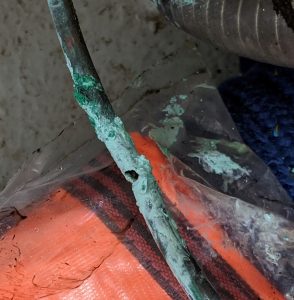