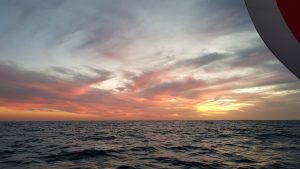 It seems ages since I did this: I’m sitting on the lee berth, laptop on my knees, feet braced against the windward – the hatch is just managing to keep the sun off the screen.

Dyna-mite by Mud is playing on Spotify and the beer in the little electric cooler I picked up second hand in Las Palmas is down to 10°C which is a lot cooler than it would be in the bilges, given that the water temperature is 26°C.

Normally, I  would open the beer at 1200 and it’s now 1130, but I might delay that if the writing goes well – anyway, breakfast was late because I didn’t feel like getting up. Why should I? There was nothing that I had to do.

Welcome to the seagoing lifestyle three days into the passage from The Gambia to Sal in the Cape Verde Islands.

Yes, there has been a change of plan. I was going to set off for the Caribbean directly from Africa but what good is cruising if you can’t change your mind?

Anyway, there was the little matter of provisioning in Banjul market: what I thought were potatoes weren’t potatoes at all – not even sweet potatoes. I don’t know what they were but they had the consistency of stone and a bitter taste that suggested they might have been medicinal.

Also, The Gambia being a predominantly Moslem country, beer was a problem and I won’t sail anywhere without beer. Eventually, I found an Indian shop with something called Cody’s. It said it was imported from Germany (possibly because the German’s refused to drink it).

No, much better to stock up in the Cape Verdes – the supermarket in Mindelo is 536 miles to the northwest but that is a mere detail when all you have to do is haul up the anchor and set the sails.

As the crews of Ceruean and Ruffian explained over Christmas lunch, if you check in at Sal, you can sail downwind through islands with sand dunes, pristine beaches and groves of date palms. This also avoids going to Praia.

Praia, on the island of Santiago has always had a dodgy reputation: Don’t just lock up your dinghy at night, lock yourself in the cabin as well. In Cerulean’s cockpit, I met Peter, the German skipper who had called there in the spring with a medical emergency. After depositing his crewmember in the local hospital, and returning to the boat, he woke up in the middle of the night to find himself facing five guys with machetes.

They tied him up, ransacked the boat, held a knife to his throat until he gave them his internet passwords…

Later, monitoring the emails they were sending using his address, he discovered they were trying to buy a car from his bank account  – a transaction that required a photo of the buyer’s passport.

Since Peter happened to be a retired Hamburg policeman, he recognised a clue when it smacked him over the head. Gleefully, he passed the photo on to the Praia police department – apparently, he is still waiting to hear what they’ve done about it.

But Sal is alright. Sal is just fine – best of all, the course puts the trade wind free enough to carry the spinnaker.

This is kind of weird because, along with the enormous, diaphanous spinny, I have hoisted the trysail, the tiny, tough bright-orange storm sail. This is because, on the first day out from the Canaries en route to The Gambia, I contrived to break the gooseneck so, ever since, the boom has been lashed on deck while I look at options for getting it fixed in Grenada.

At the moment the best seems to be a Facebook friend sending me his old one – but finding out if he could get it off the boom wasn’t the top priority in the middle of a family Christmas. So that’s another reason for delaying the crossing.

Meanwhile, we’re still doing five knots in the right direction, the temperature in the cabin is up to 27°C and the beer is still down at 10°C

Even if it is the awful Cody’s stuff. 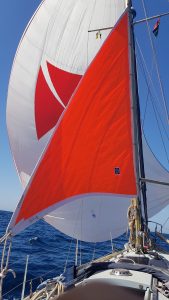 Spinnaker and trysail – an odd combination.

18 Responses to On passage