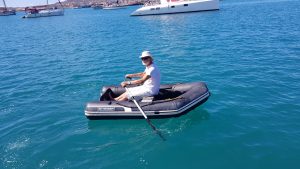 The three Frenchmen came roaring up in their RIB and cut the motor alongside so that they lay rocking on their own wake – the harbour suddenly silent, 9.9hp on tickover.

“Do you want a lift?” said the helmsman.

“Do you want a lift?” said the bowman, not realising I had turned down the offer from the helmsman.

The third one just looked, eyebrows up under the brim of his baseball cap. After all, it is the best part of a quarter of a mile from the dinghy dock at Mindelos’s floating bar to the anchorage. Why would anyone be rowing?

It’s not that I don’t possess an outboard motor. I have written in the past about my little electric job – and then wrote again saying how I had taken to using it for an extra push when rowing into the wind (like an electric bike going uphill).

But now I realise I haven’t used it since the Canaries two months ago – and I’m not sure I ever will again. The acid test came in the anchorage off the deserted island of Santa Luzia. Two hundred yards away was Ruffian of Amble with Iain and Fiona, who have been living aboard for the last four years and are currently heading in the general direction of Surinam. Would I like to come for dinner?

So, here was the decision to make: Should I ship the outboard, or could I trust myself to row back in the dark against the wind.

The wind, I should point out, is not the same in the Cape Verdes as it is in other places. It has a habit of shrieking down the mountains and through the valleys. Gusts of 35 knots are fairly routine. Could I row my tiny inflatable against a 35knot gust? Obviously not – but on the other hand, a gust, by definition, does not last long. Once the wind drops to something reasonable, I would have no trouble.

At this point, I should explain that it was important that I got this right. If failed to row to windward, broke an oar or whatever, the next stop would be Brazil.

The Royal Cruising Club’s guide to the Atlantic Islands points out that rescue services in the Cape Verdes should be assumed to be non-existent (rather in the way that lighthouses round here should be assumed unlit).

Iain and Fiona, of course, have a big RIB for a dinghy and a powerful outboard but they would have to launch it to come to my rescue – that was if I had some way of alerting them that I needed rescuing. Should I take the hand-held VHF with me? Don’t be ridiculous. I had a torch and I’m sure we all knew the morse code for SOS…

Of course, in the event I got there and back for risotto in the cockpit with no mishaps – indeed, I am pleased to say that in one truly ferocious gust, I checked my transits and am proud to say that I was not losing any ground at all (even if I was rowing like the Cambridge crew the year they sank).

But, as John Noakes used to say: DON’T TRY THIS AT HOME!

If you take your little inflatable out of its box and try to row it into 35 knots, two things will happen:

First, you will find that the oars are too short to get any real leverage. To compensate for this, the manufactuer will have made them good and wide … which means that in a choppy sea, they will keep on hitting the waves on the back-stroke and stop you dead in your tracks.

So you will have to row harder – much harder than the designer imagined when drawing up the scantlings for the plastic rowlocks.

Which will break – and off you go to Brazil…

Here’s what you do: Get some stainless rowlocks made up to the pattern of the plastic ones – this is not difficult or expensive.

Secondly, buy longer oars in the shape of proper boat race sculls, with low-profile blades incorporating a professional curve to give a kick to the end of every stroke.

Finally, keep the old oars, and on an inky black night with the wind shrieking over the mountains and nothing under your lee but 3,000 miles of Atlantic, sling a spare one in the bottom of the boat. It’s handy for manoeuvring at the jetty, and it might just save all that faffing about with “is it dot,dot,dot,dash,dash,dash or is it dash,dash,dash,dot,dot,dot…”

Next, for singlehanders: once you have a crew hanging half their bum over the transom, you will be going nowhere.

And for old singlehanders: After old age begins to bite, you will find that your muscles begin to atrophy. Your once-powerful biceps become little sticks; your broad shoulders shrink until you start buying girly T-shirts in the market.

But rowing is good exercise.