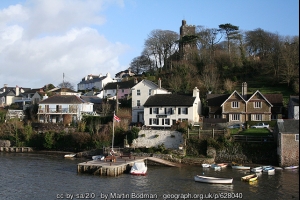 The Swan Inn at Noss Mayo on the River Yealm – the perfect place to dry out for a scrub.

Like most of the world’s great discoveries, the perfect solution to the antifouling problem turned up when I was looking for something else. I could tell you what it is right now – in a few words, as it happens.

When I bought Samsara, I had a lot of money left over and thoroughly enjoyed spending it – there was the fancy feathering propellor, the new solar panel, upgraded electrics – all the things that usually spend years on the wish list.

And there was Coppercoat antifouling. If you look it up in the search box, you will see I have written about this elsewhere. It has not been a great success (which is the fault of my hull,  not the stuff itself). Anyway, I’m stuck with it now. I’m certainly not going to pay all over again to have it taken off. Instead, a couple of times a year, I lean the boat up against a wall somewhere and spend three hours underneath with a bucket of water and a packet of scouring pads cleaning off the weed  while green slime drips in my eye.

It’s not something I look forward to. Never mind, at least I can choose a nice place to do it. The River Yealm is a nice place, and if you’ve got a little boat, you can dry out in front of the Swan Inn which does a very nice pint when you’ve finished.

Except that I couldn’t get started. Do you think I could find the scouring pads? I knew exactly where I kept them (stuffed down behind the seacock under the galley sink). But this time, they weren’t there.

That was how I found myself pedalling all the way up to the bridge and then down the other side of the creek to the Co-Op at Newton Ferrers. You would think a Co-Op would have a pack of scouring pads. Not in Newton Ferrers.

Instead, they suggested the garage at Yealmpton. Seeing how far that was, I phoned ahead. They didn’t have any either.

Having gone to all this trouble, I asked in the craft shop (what do you think they said) and the deli…

Eventually, since I had tried everywhere else, I tried the chemist. Oddly enough, they had some of those half-sponge things. Apparently, they used them for cleaning the chemistry set. They were only £1, so I bought them – not that I thought they would be much good for cleaning the bottom of a boat.

By now I was so obsessed by the whole nonsense that I explained it to the man behind the counter.

It was a moment as significant as Moses getting to the top of the mountain and saying: “Actually, I was looking for some tablets of stone. I don’t suppose you’ve got any…”

Because then the man behind the counter divulged the best-kept secret in the history of boat maintenance. He did it with all the sense of occasion that he would employ in taking a tube of hemorrhoid ointment off the shelf and sliding it across the counter.

Here is what he said: “Why don’t you do what the fishermen do?”

And here it is. This is what the fishermen do: They put half a bottle of bleach in half a bucket of water and get a garden spray – the sort of thing you use for greenfly – and they spray the bottom of the boat with bleach. That kills the weed. Then, over the next few weeks, it falls off. Fishermen don’t want to pay for expensive antifouling. Bleach is cheap.

I didn’t believe it. I mean, who would? If it was that simple, why didn’t everyone know about it?

All the same, if there was a chance of avoiding three hours scrabbling around under the boat with the green slime…

I didn’t have a garden spray in the cockpit locker, so I used the brush that goes with the dustpan. It turned out to be ideal for slapping on the bleach. Instead of three hours with the scouring pad , it took me just 30 minutes – although I suppose, I should also count the other two-and-a-half hours watching it dry from the pub terrace.

Well, of course, it didn’t work. A week later, there was still a fringe of weed a couple of inches long all around the waterline. I’d gone to all that trouble for nothing. Serves me right for being so gullible. I expect the chemist dined out on that one for the rest of the summer.

But wait. It is now fully two months later. I am in the Canary Islands. The water is warm. I have been swimming off the boat and, as you do, I dived underneath to see what was going on down there.

Would you believe it? There was not a scrap of weed to be found anywhere – not the fine green beard that grows on the waterline. Not the barnacles around the prop and the rudder – just a light dusting of algae that came off in clouds when I brushed it with my hand.

Of course, I do have to quieten my conscience about adding half a bottle of bleach to the world’s oceans a couple of times a year.

On the other hand, my saucepans have never been so clean.