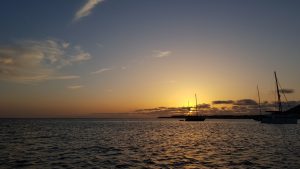 Every year up until now, October has been the turning point. Time to start making my way home for Christmas – three months holed up in the Walton Backwaters with the seals and the geese, slowly poisoning myself with carbon monoxide as the charcoal heater leaked more and more smoke into the cabin.

Maybe you don’t wish to know this. Anyway, this October, I am anchored off Playa Blanca in Lanzarote. The temperature in the cabin is 30°C, but with the breeze blowing through the open hatches, it’s cooler than the cockpit. Anyway, you can’t read a laptop screen in that kind of sunlight. Also, there’s enough sun and wind to keep the cheap little fridge going 24hours a day. Before lunch, I had a beer that was every bit as cold as it would have been ashore in the Sailors’ Bar.

Of course, things didn’t start out like this. My first attempt at leaving Falmouth lasted just 90 minutes. That was how long it took to realise that all the freshwater had leaked into the bilges where the automatic pump dumped it with the utmost efficiency straight over the side.

I considered carrying on, reasoning that I had enough water in bottles, beer in cans and the liquid content of tinned food to keep me going for three weeks. All the same, it wasn’t sensible. Also, it was easy to go back.

Anyway, one of the gas burners had packed up – not a disaster, but if I needed a gas engineer, Falmouth was the place to find one, not the Bay of Biscay.

As it happened, no sooner had I dropped the sails than the engine overheated. Abandoning this trip was turning out to be an excellent decision. So I sailed to within ten metres of the Falmouth Haven Marina pontoon and then motored for the ten seconds it took to reach the berth – and still the alarm went off.

Falmouth Marine Services came out that very afternoon and left me overnight with a heat exchanger full of neat descaler – whenever I had used this powerful acid, I diluted it as per the instructions. But then instructions are written for wimps. The next morning, the water flowed where it should.

The gas problem turned out to be a simple matter too. I managed to fix that myself (oh, alright then, the Facebook community told me what to do).

The water was another matter. Over the next three days, I made five excursions to the out-of-town trading estate at Penryn, home of Screwfix and B&Q. According to Google Maps, it is 2.5 miles on a bicycle. But I wasn’t on a bicycle. Half the time, I was pushing the bicycle uphill. The trip took 50 minutes (only 20 coming back, though).

Each time I made it, panting, to the top of the hill, I thought this would be the last. But, after the new components didn’t fit or weren’t compatible with the old ones or just dripped for no apparent reason, I had to cheer myself up by going out for dinner – something that should be a reward for getting it right.

Finally, on the Friday (I’ve given up being superstitious), I completed the new Brexit paperwork a second time and headed out past Black Rock feeling that, at last, the adventure had begun.

I was a bit premature with this. After four days, here is a list of what didn’t work:

Of course, that might have had something to do with…

The worst of it was that all of these things exacerbated each other to produce an electrical crisis: My sole means of charging was now the wind generator which, of course, is least efficient when sailing downwind – which is what I hoped to be doing for the next thousand miles.

I went round the boat switching things off. I didn’t need the VHF – there would be no fishing boats out here. That was 0.2 amps. The instruments could go too – another 0.2 amps. I could always switch them on when I needed to look at them.

I discovered that the autopilot on standby still consumed 0.1amps – what a waste! I could turn off the AIS and the GPS because I was the best part of 200 miles from land, and so pilotage was hardly a concern – and as for being run over by a supertanker; well, I could keep a lookout – I should be doing that anyway.

I did switch on the masthead tricolour when it got really dark. This uses 0.2amps. Was it really necessary? I was well out of the shipping lanes since I was heading for an arbitrary point in the ocean 150 miles west of Finisterre, and I couldn’t think why anyone else would want to go there. Besides, a ship ought to pick me up on radar. The tricolour would be just to confirm I was a sailing boat – and I have noticed that ships in the open sea avoid me by at least a mile.

The switch panel looked very strange with only one clothes peg on it.

You may think that clothes pegs on a switch panel would look odd anyway, but I use them to show me what I need to turn off sometime. 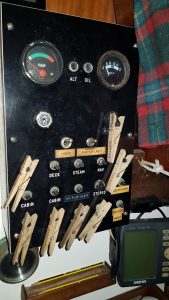 At this point, I felt some sympathy for Tom Hanks and his crew in Apollo 13 when they’re trying to get back to earth on battery power that wouldn’t run a coffee percolator.

Anyway, I only needed to spend one night stumping around the boat saying: “Failure is Not an Option”. After breakfast, when the neat descaler had had its 24 hours in the heat exchanger, I started the engine and delighted in the sight of water pouring out of the exhaust. Also, now the batteries had drained all night, the solar panel found the oomph to charge them – so I wouldn’t need the water-driven gizmo anyway.

And finally, after a week of what I had calculated to be a two-week passage, the Portuguese Trades kicked in. These are supposed to blow north to south down the Iberian peninsular. Sometimes they do. This time, they did.

It was my first experience of trade wind sailing – albeit without the flying fish (although I did pass a turtle going the wrong way). For seven days, I ran under twin headsails, the main furled on the boom. In all that time, I only touched the sheets once – and that was to reef. A couple of times a day, the course would need adjusting but apart from that, Samsara ploughed along in a welter of foam reeling off, on one occasion, my best day’s run ever – 155miles distance made good.

I read, I ate, I listened to my 47hours of Spotify playlist – which, thanks to the fancy new phone, would actually play for 47 hours instead of stopping inexplicably in the middle of every third chorus.

And every day, it got warmer. By the time I had reached the latitude of Casablanca, I had stopped worrying. I was starting to enjoy myself.