The cost of waiting 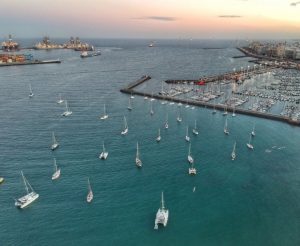 The marina and the anchorage at Las Palmas de Gran Canaria. Drone photo by Emmie and Tim of Shadowfax (www.chasing-contours.com)

That’s what you do in the Canary Islands at this time of year. The boats have to get across the Bay of Biscay by the middle of September to avoid the equinoctial gales – but they mustn’t reach the Caribbean until the end of the hurricane season, and that means not setting off until the middle of November. So, for two months, they wait.

A lot of them are just parked in marinas – their crews flown back to the office. The rest exist in a peculiar sub-tropical limbo of cold beer under awnings.

The first week I was here, I stopped in a different place every night. That’s what you do when you’re cruising. Now I haven’t moved for two weeks. It took a while to realise the Canaries are not like Essex.

Well, of course not: The temperature is in the 30s. From twelve until four, nothing moves. I’ve given up soap – instead, I dive over the side before breakfast…

But, there’s more to it than that. Essex is full of rivers, so you can creep in around the mudbanks and find a sheltered spot whatever the weather.

The Canaries are extinct volcanoes (actually not so extinct – the one on La Palma is blowing off at the moment). Anyway, it means there are no estuaries. The only places to stop are open bays where the Atlantic swell rolls the onions off the chopping board or marinas where the man behind the counter shrugs sympathetically and tells you it’s high season. Not only does this mean high prices, but you might have to move on tomorrow because he’s got someone else booked in.

So there’s a great tendency for everyone to stay put – particularly the ARC boats.

The ARC is the Atlantic Rally for Cruisers – a massive event in which 200 boats with 1,200 crew sail across the Atlantic from Las Palmas to St Lucia all at the same time. It is one of the great mysteries of the sea that they don’t all bump into each other like a regatta of seven-year-old in Optimists. The event is massively social and hugely expensive, which means that most of the boats are seriously posh. This year, some of the catamarans have three decks, like wedding cakes.

It does seem rather a waste that they leave from Las Palmas, because – for some reason that nobody seems able to explain – the capital of these islands boasts the cheapest marina in Europe. They quoted me €55 for eight days. It’s like being in Southampton’s Port Solent – but the only time I stopped there for a night, it cost me £40. I could have stayed in a hotel.

Ah, but wait: In Las Palmas, this municipal generosity extends not just to the marina but also to the anchorage next to it. So that must make it the cheapest anchorage in the world!

Well, obviously, most anchorages are free. But it is one of the cruising yachtsman’s perennial moans that over the past 20 years, harbour authorities have sought to cash in on their local topography. For instance, halfway up the Truro River in Cornwall, where seafarers have sheltered for nothing ever since the first caveman stopped to fish from his coracle, the harbourmaster now turns up in his launch to relieve you of £7. There is no landing stage, no water tap. Nothing has changed in a thousand years – except for the introduction of “Harbour Dues”.

Yet here I am, securely anchored just off the popular Playa de las Alcaravaneras – high season and all that – and paying €1.42 a night. That doesn’t even cover the cost of the paperwork (there’s plenty of that). Also, they let me leave my dinghy in the marina and fill up the water can while I’m at it.

For a small additional charge, I could queue for the showers with all the ARC people. But if the sea is free and about the temperature of bathwater anyway…

13 Responses to The cost of waiting