Too sensitive by half

I’m writing this with a cup of coffee at my side – as you do.

It took no time at all to make.

Well, it didn’t once I had woken at 0730 with the gas alarm going off, pulled the sleeping bag over my head, hoping the incessant beeping would sort itself out (which it did after 20 minutes).

However, it started again 20 minutes after that – and this time it didn’t stop. The gas alarm doesn’t like the wet and cold and I’m in Dublin where it hasn’t stopped raining for days.

Does anyone else have this sort of trouble? Or do you religiously turn the gas off at the cylinder every time… or maybe just trust that everything will be alright and the boat won’t blow up after all?

I have always had a rather difficult relationship with gas on boats ever since watching my father pump the bilges dry (which he did every day, this being a wooden boat) and, once he had finished, he would continue pumping for another 50 strokes, just pumping air – or, as he explained: “Getting rid of any gas that’s escaped down there.”

So I grew up assuming that there would always be some gas wafting around in the bilges, waiting for an errant spark to blow the whole shebang sky-high.

Over the years, I have made several attempts to get away from gas. In the little Caprice, I tried an alcohol stove but that was even more frightening – sheets of bright yellow flame right up to the deckhead.

Aboard Largo, my old Rival 32, I fell in love with a wonderful brass Taylor’s paraffin cooker. It was a veritable antique and looked the part. Unfortunately, it required all the care and attention you would expect of an antique. Making a cup of coffee was a project. You had to plan for it, prepare the apparatus – and even then, you might end up with similar sheets of bright yellow flame (only this time, accompanied by clouds of foul-smelling black smoke).

This seemed to exhaust all the options – although, it should be noted that one of the boats in the Ocean Cruising Club’s Celtic Rally had an induction hob which got fired up whenever they plugged into the marina mains (they had a washing machine, too).

Anyway, with Samsara, I reckoned I’d earned the right to go down the easy route and stick with gas.

I did, however, bring in a shipwright to build a sealed locker as required by the survey – and a marine gas engineer to check the installation and fit an alarm… which he did in strict accordance with the instructions.

These stated that the two sensors should be fitted “in the lowest possible position where they will remain dry. The most suitable location for the detector is near any gas appliance at floor level or just under the floorboards.”

So they ended up in the bilge.

That first winter, the boat was out of the water and from New Year until the end of March, the thermometer didn’t creep over 9°C for a single day. I know, I had some painting to do. By the time I did get down to it, the cold and the damp had kept the alarm beeping for so long it flattened the battery.

I moved the sensors from “just under the floorboards” to just above them.

It was only afterwards that I discovered why the bilges were always full of water (leaks in the freshwater tanks – with the stern gland adding enough salt to throw me off the scent,..)

Anyway, once we were back in the water in April and I dunked the lee rail trying to scrape round the wind farm off the Wallet, the bilge-water appeared above the floorboards and started lapping at the sensors – which, of course, set off the alarm all over again.

So I moved them up another level: One in the saucepan locker and the other tucked low down, right at the back of the cooker. It was the perfect place for detecting gas – just a lousy one for changing the sensors.

You see, by this time, I had spent some hours on the phone to the manufacturers being terribly polite until they succeeded in selling me two spares.

Ever since then, I have kept one pair in a sealed plastic bag and make sure the old ones are good and dry before they take over their stint as spares.

And this would be fine if only I hadn’t chosen “low down at the back of the cooker” as the ideal place. It is not ideal – especially when trying to locate four little holes for the sensor’s four little prongs – and all before breakfast. In the end the cooker had to come out, the whole cabin filled with tools, I scraped my knuckles, lost another nut to the collection in the bilges – but finally the “low-down under the cooker at the back” sensor is low down at the front – and finally has stopped beeping.

It’s not ideal. My good friend the gas engineer will probably wash his hands of me.

But I don’t care. In fact, I have an enormous sense of well-being. That’s what comes from having a cup of coffee beside you and nothing going “beep “. 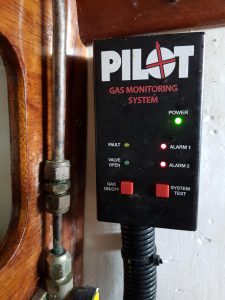 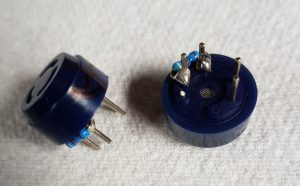 2 Responses to Too sensitive by half