Gone to the pub

If you’re going to get stuck somewhere, Dublin is a pretty good place to do it.

The plan had been to stay for a day or two while the Isle of Man TT was rained off. I could do the Guinness tour, listen to some Irish music in the pubs. Drink some more Guinness… Who cared if it rained?

But then, just as I furled the jib as the wind picked up in Dublin Bay, the sheet flipped the whole of the top of the winch onto the deck.

How did that happen?

The top of the winch is supposed to be held down by a plastic disc which screws into the feeder arm and holds the whole thing together.

There you are, isn’t that impressive? I know that the silver bit is called the “feeder arm”. That’s because I had to scour the internet to find out what I needed to ask for when ringing round the local chandleries for a replacement – because you see, when both the feeder arm and top cap leapt off the winch and bounced onto the side deck, the top cap bounced higher and straight over the side.

It was one of those moments when you freeze to see what’s going to happen – and later on, wish you were the sort of person who doesn’t freeze in emergencies but leaps into action (in this case, snatching the bits out of the air like the second slip at Lords).

Instead, of course, I stood mesmerized as the feeder arm – being the heavier of the two – landed in the scuppers while the tiny, lightweight top cap arced delicately over the guardrails and into the boiling maelstrom which is Dublin Bay in a southerly force seven.

Now, I suppose it would have been possible to sail back to the Isle of Man for the last of the TT without a starboard cockpit winch – and, of course, it would certainly be possible if I had a posh boat with secondary winches. But as things stood, I really couldn’t think of anything more inconvenient: Would switching the top cap from the port winch every time I went about be more trouble than rigging a handy billy on the sheet?

Simpler to wait ‘til Monday morning and ring round the chandleries for another – except, for some reason I never established, Monday was a bank holiday in the Republic of Ireland – although, not in the UK.

What if I got to Tuesday and nobody had one – and wouldn’t even sell me the one off the winch in the window (which, of course, would make their £800 item of stock totally unsaleable until they got a new top cap).

In the end I ordered one from the UK. They’d get it in the post right away. It should arrive on Wednesday.

Hmm. If I left on Wednesday evening, I could be back in the Isle of Man by Thursday night – still in time for the last day of the TT on Friday. Anyway, there didn’t seem to be an alternative.

Odd how things turn out: Once the package was in the post, I stopped worrying. In fact, those four days in Dublin were just great. I did the Guinness tour – actually, I did it twice because I was just about to collect my pint when a very insistent and annoying announcement over the public address kept demanding a Mr Sands’ presence in reception – which turned out to be the code for a fire alarm.

Still, I got my pint in the end (you get to look forward to it after going round the tour – twice). Do you know how to pour a Guinness? There’s a right way and a wrong way. It’s all to do with the proportion of carbon dioxide and nitrogen you put in the glass along with the beer. Anyway, I messed up mine by trying to put in too much Guinness and it went slopping all down the side.

I joined a party of Americans and Canadians for a musical pub crawl around the Temple Bar – the lone Englishman. I was quite the celebrity. “Welcome to Europe!” said the guide.

In those four days, I rode my little folding bicycle all over the city – the Yeats exhibition – backwards and forwards across Halfpenny Bridge…

St Steven’s Green was an eye-opener with all its signs telling the story of the Easter Rising: Here was the spot where the Irish Citizen Army dug their trenches (and pinched cushions from cars parked in the adjoining streets to make themselves comfortable) – and there, on the facade of the Royal College of Surgeons were the scars from the British Army’s Lewis gun firing out of a bedroom window on the fourth floor of the Shelbourne Hotel. Of course, both sides agreed a truce when it was time for the Park Keeper to feed the ducks.

I didn’t know any of this. But then I went to school in England. I wouldn’t – which, of course, explains half a century of misery on both sides.

Meanwhile, everywhere you go in Dublin, there are pubs and there is music. In fact, the music spills out onto the street. It seems that on every corner, there is someone with a guitar – and next to the statue of Molly Malone, a proper set-up with microphones and speakers and a duo leading the tourists in endless repetitions of “She wheeled her wheelbarrow…”

Molly, by the way, was quite a gal if her statue is anything to go by – her bosom positively gleams (lovingly polished by the groping hands of ten million tourists a year).

When Wednesday came and went with no sign of a small package for me behind the bar of the Poolbeg Yacht and Boat Club, I was really quite philosophical. I think I ordered another Guinness to make up for it. By then it was too late for the TT. When it did arrive on Thursday, I set off back across the Irish Sea to Wales.

There was to be free mooring for a week at Pwllheli in preparation for the Jester Challenge – more about that next time. It’s an event for small single-handed boats sailing to… Ireland. 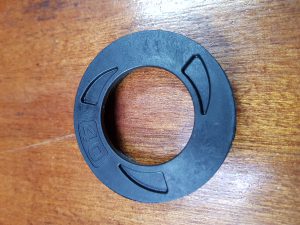 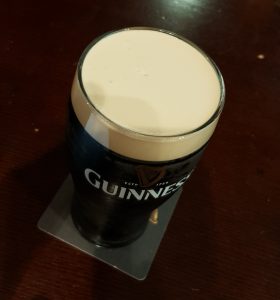 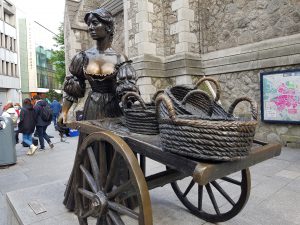