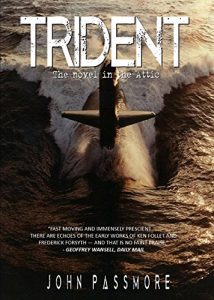 How very odd. I’ve got a book about that. I wrote it in 1983 and published it on Amazon in 2017.  This was the review by Geoffrey Wansell in the Daily Mail:

Former Daily Mail reporter Passmore first wrote this novel in 1983, when it was dismissed by publishers as ‘a little far-fetched’. How wrong they were.

The plot revolves around a Trident submarine captain and his Admiral father intent on ensuring Britain keeps its nuclear options open, a newspaper reporter and a secretary in the Defence office who falls into a honeytrap set by Russian intelligence.

Fast-moving and immensely prescient, there are echoes of the early works of Ken Follett and Frederick Forsyth — and that is no faint praise.

The tragedy is that it remained hidden in the author’s attic for 34 years. Let us hope he has time to write many more.