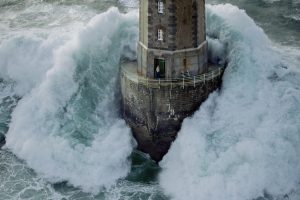 The land is complicated. Life is simpler at sea. I have now been in Falmouth for 42 days – exactly as many as I spent going nowhere and back again.

The boat is loaded with food (another 49 cans of sardines). All I need to do is fill the water tanks (no longer leaking) and I am ready. The Shipping forecast offers northerly force 3-5, fair, good. Lying at anchor in Falmouth harbour I can see sails shaking out all around me as the locals revel in being allowed out at last.

I could go too. I could accept that the last spare part will just have to stay at the harbour office while I pass La Jument light off Ushant just in time to pick up the north easterlies across Biscay. It’s 1,300 miles to Lanzarote. Another 400 round the islands and then 875 to Porto.

Of course, I could stop – or maybe make a detour to Madeira. Last night I sat over the six o’clock beer working it all out and saying: “Sod it, let’s go!”

I could imagine the anchor breaking out and the bow swinging to the wind. The friendly couple on the 45ft cutter next to me waving goodbye – the children on the little beach, standing waist-deep in their shortie wetsuits and staring … the surge of the first swell off St Anthony’s Head. Would she carry the spinnaker?

Except that, this morning the wind is dying. The ensign has folded itself over the pushpit and I have missed my weather window.

I could make a fastening for the lid of the chart table so that it wouldn’t open if the boat turns over. I mean, how likely is that? But it’s easy enough to do and there’s some important stuff in the chart table. I could varnish the companionway – that needs doing three times a year.

But the fact is that I’m ready. Just to make sure, I went and propped the boat up against the little quay over on the Flushing side and spent a tide scrabbling around on the wet sand underneath scraping off pubescent goose barnacles and greasing the propeller, replacing the anode…

People came and interrupted me – a relief because there is nothing quite as unpleasant as scrubbing away above your head with a stinking pan scourer while green slime drips into your eye. The only upside is that you didn’t buy a bigger boat.

The new cooker is installed but I still haven’t put away the cigarette lighter (not quite believing I have electronic ignition). The new pipework doesn’t leak. The replacement mainsail is bent on and fits perfectly. The upgraded reefing system is ready to try in earnest. In fact, after 42 days, I can’t even remember all the entries in the “To Do” app which have been despatched with that self-satisfied click as“Done”.

But there is one thing that isn’t “Done”.

After all, those 42 days and 3,629 miles or whatever it was, just as we squeezed passed the Manacles and I went to let out some more headsail for the final close-reach into Falmouth, the furling gear jammed.

This is, of course, one of those ultimate nightmares. It’s right up there with sinking, dismasting, knock-downs, roll-overs and running out of beer. Many a boat has limped into port with a headsail fluttering in shreds because a fortnight ago someone didn’t keep the tension on the line and ended up with a riding turn, jamming the gear and leaving a fraught crew battling to make headway with the boat effectively in leg-irons.

I have a love-hate relationship with my furling gear. If I had my way it would be a Profurl or a Furlex – something that was simple and reliable and accessible.

Mine is a SeaFurl, made at about the time Noah was debating whether to give up hanked-on headsails. It is enclosed in a discreet stainless steel cowling which you have to unbolt (dropping the bolts) to get at the works.

And the works include a silly plastic disc which is supposed to stop the coiled line riding up into the top of cowling and jamming (which it wouldn’t if the cowling wasn’t there). Obviously, being plastic there is a possibility that this disc might get damaged somehow and need to be replaced. Also – obviously – you wouldn’t want to have to remove the entire assembly in order to do this.

So the designers came up with a brilliant idea: They would make the silly plastic disc in two halves which would clip together round the drum. The fact that this made the whole thing even more flimsy somehow escaped them.

It broke two years ago. Now it had broken again – and sure enough, the line grabbed the opportunity to jam itself once more. This time in the most inaccessible place, right against the back of the cowling. Beyond the reach, indeed, of someone lying on the foredeck with the big screwdriver and the occasional wave breaking over his head.

The obvious solution – taking the sail down – is never an option in this situation because it only arises when the sail is partly-furled. That means removing the sheets, leaving the sail flying in the wind and motoring round and round in circles until it furls by itself.

In such circumstances – the open sea with a stiff breeze – this is impossible. It would need the sort of engine people install when they don’t intend to put up sails in the first place.

It wasn’t until I was inside the harbour, in flat water, that I was able to execute this embarrassing manoeuvre (in full view, naturally, of all the amused blue-water sailors who gather in such a celebrated jumping-off point).

I got the sail off just as soon as the wind dropped, picked out the tiny pieces of the silly plastic disc and set about ordering another…from Tampa in Florida…in the middle of a global pandemic…

I suppose 42 days is not really so long. It was three weeks before I could get anybody on the phone – a harassed man on his first day back in the office looking at a list of emails that seemed to stretch around the world (many of them mine).

Then I became acquainted with the phenomenal efficiency of the US Postal Service tracking system. My consignment was in transit to the Next Facility. It had arrived at the Regional Facility and then progressed to another Facility … and another … before being Processed and arriving at its Origin Transfer Airport (Miami) and Departing (two days later).

I became obsessed, like a teenager on GroupMe. Hey, it had Departed Heathrow (had it arrived?) and was In Transit to Destination.

The Destination was the Harbour Office in Falmouth and therein lay another problem. The Harbour Office was locked down. That is to say, you had to ring the bell and someone would come clumping down the stairs to open the door and tell you not to come in. But they would agree to look in the cupboard and see if your parcel had arrived.

In the past, they had done just this – many times (Allen keys, mung beans, repaired autopilot…) Indeed, one of the Harbourmaster’s assistants made it quite plain that I was abusing the HM’s hospitality. I didn’t feel like calling after that – not until I was sure my Item had arrived.

And it did arrive – but in Coventry for Customs Clearance. Then, after another 48hours, Frabjous Day: “Your Item has arrived at the delivering Post Office.”

Isn’t that great? Nothing about having to pay duty on it, either – that’s what happened last time. I was getting to like pandemics.

But somehow my Item seemed to get stuck in the Delivering Post Office. I waited for the obligatory 48 hours for the final message “Your item has arrived at Destination” or even “We’ve decided you have to pay Duty on it after all” but the screen remained stubbornly blank.

I telephoned Falmouth Post Office. They were unimpressed with my US Postal Service tracking number. I called Parcel Force. Parcel Force is online.

In some desperation, after three days, I puttered across the harbour, slithered across the muddy seaweed (low tide, should have thought of that) and scrambled up the ladder to pay the Harbourmaster a call. Mr Grumpy was off duty. Instead, his charming colleague looked in the cupboard and said there was a letter for me. She brought it to the door. It was from Parcel Force: They would deliver my parcel just as soon as I paid the duty. The letter was three days old.

It is now scheduled for Delivery on Monday. It has its own UK tracking number.

I reckon I could be away by lunchtime. The wind is due to return at two o’clock.