Rather like the Second Coming or the new series of  The Crown, the Great Refit has been anticipated for a long time. Now it’s here, I feel somewhat overwhelmed.

For one thing, The List has been growing steadily for five years. The boat hasn’t been out of the water for more than a couple of months in all that time.

Indeed, since the beginning of last year, she’s been in constant commission: up the East Coast of England, over the top of the Shetlands, down the west coast, up the English Channel and back again, down to the Canaries, West Africa, the Cape Verdes, the Caribbean from Grenada to the BVIs, then back to Falmouth, the Channel Islands, France and now Conwy in North Wales – where all this started back in 2017.

No wonder she needs a bit of TLC.

However, the phrase “a bit” suggests a polish, a dab of antifouling and a couple of new filters.

You want to know about the list? Here it is:

A new heater: Yes, I really do need a new heater. After mentioning on the My Classic Boat channel that the old Hampshire Heater was slowly poisoning me and that I had taken the batteries out of the carbon monoxide alarm, I have been deluged with warnings about impending death.

Of course, I could go for the cheap Chinese forced air variety, but I really like the idea of something that consumes no electricity at all and asks only for a bit of driftwood. Consequently, I became obsessed with the Dickinson Newport solid fuel heater. I imagined some sort of hippy existence – all Fair Isle sweaters and home-baked bread.

In fact, it transpires that the salt ingrained in driftwood will wreck the combustion chamber. Also, they’re notoriously difficult to regulate (coal burns too hot, charcoal too fast. Wood pellets are the answer, but you have to keep feeding it every hour on the hour, or it goes out…)

So now it looks like I’ll be going for diesel with the Refleks bulkhead mounted version – if I can find anyone to fit it.

Then there’s The New Cooker: I’m on my second Aqua Marine Neptune. It lasted 18 months (the first managed 11). In both cases, the flame-failure devices packed up – closely followed by the right-hand burners. Then the rest of this useless piece of crap dissolved into rust. It was only later that I considered it might have been designed for occasional weekend use over six months of the year – so I was giving it six times the wear and tear it was intended for.

The solution seems to be a GN Levante – admittedly, this does cost more than three times as much, but independent advice suggests it will go on forever. Meanwhile, the galley may have to be remodelled to accommodate it.

Then there’s a new deck hatch. Maybe I could get away with replacing the glass in the old one, but if I’m going to have new headling anyway, a 50 year-old-hatch is going to look really tatty.

And yes, I am having new headling. Apart from its age, there are all sorts of fastenings behind it leaving rust streaks all over the place.

New Sails: Ah yes, I had already spent a contented hour on the Crusader Sails stand at the Southampton Boat Show – and then both the main and headsail tore in the same gust off Land’s End.

And here’s the ridiculous thing: I carefully measured the headsail so the new one would be identical – and then kept it in case of any questions.

Eventually, I decided it was just cluttering up the place and threw it in the marina skip.

The very next morning, Paul at Crusader rang to say my measurements didn’t make sense – and yes, that was the day they emptied the bins.

Also, I’m going to have something called an Ultra-Large Genoa. When I did the OSTAR in Largo, Crusader made me a mylar ghoster which was fabulous but really needed to be flaked every time by a racing crew. I just stuffed it in the bag – and destroyed it in a season. The new one will be on its own furler – and I would like to see it set on a “prodder” bowsprit.

New Anchor: If I am having a prodder, I can’t have an anchor with a roll bar.

New Stanchion: I managed to break one on the way from the Canaries to the Gambia when retrieving something called a Round Sail. This was one of those mistakes you make if you’re prone to impulse-buying: Spending 900EUR on a cut-down parachute flying from the top of the mast seemed like a good idea at the time. After dropping it in the water on one side of the boat and pulling it out on the other, I left it in the skip at Banjul harbour (where the local fishermen thought Christmas had come early).

New Coppercoat: The first lot fell off – although it did take five years to do it. Actually, it worked rather well while it was doing so. 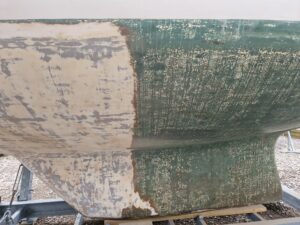 New halyards. 12mm is just too big for the cleats.

New standing rigging: It’s 15 years old, and a bunch of us Rival owners got together and had a job lot of new deck bolts made – they’re one size up and would look massive on a 40footer.

New furling gear (it actually disintegrated when Tony the rigger started removing it). He thinks the latest Furlex looks “plasticky” so we’re going for Profurl. I had a Profurl on Largo, and it was fine.

A new S-bend for the exhaust. It will be nice not to have a constant leak all the time the engine’s running.

New autopilot: I’m on my third Raymarine ST2000+ and daren’t leave it out in the rain in case it goes the way of the other two. This is plainly ridiculous. Watch out for an ST2000+ on eBay.

New sprayhood: apart from being able to put your finger through it, I left a dab of deck paint on it back in 2018, and it’s offended me ever since.

New beer cooler. The compressor-powered Alpicool is more efficient. Anyway, being a vegetarian, I don’t need a proper fridge.

A new length of toerail: I forgot to lash the anchor after waiting for the tide round Land’s End. The chain spent half an hour chewing through the teak while I wondered what that knocking noise was. Have you any idea how much teak costs these days?

New washboard with a window for use at sea – manhandling a three-part companionway just takes too long.

Give me a minute; I’ll think of something else…