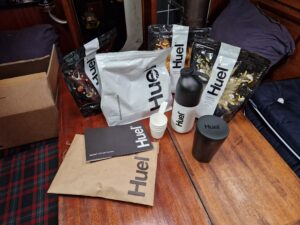 After a week or two, food assumes an importance far greater than mere sustenance. Read any account of the great singlehanded voyages, and you will find references to curry (Knox-Johnston), plums and cheese (Slocum), Worcestershire Sauce (Thompson).

It will be a long time before I attempt a voyage long enough to call for freeze-dried victuals, but I always imagined them to be full of artificial colouring and E-numbers, and besides, I’ve now gone vegan (except for the other day in St Malo when I found myself ordering the Plateau de fruits de mer).

I started looking into this meal replacement stuff. I read reviews (mixed). I read through the ingredients (very mixed).

Naturally, the Facebook algorithm picked up on all this in the same way that it calculates my age, adds my obsession with not dying, multiplies it by the occasional click on TikTok and feeds me a diet of prostate preparations and Asian brides.

So, once I stopped at Conwy for the big refit and could be reasonably sure of mail-order parcels catching up with me, I spent a happy hour on the Huel website. This is necessary because they won’t let you buy just a bag – you have to buy a whole box. By the time I had finished, had considered Cinamnmnon Swirl and Tomato & Herb, and compared Mac & Cheeze to Thai Green Curry, my credit card was lighter by £87, and the packets locker was full again.

Within seconds, an email: My order was being prepared. I could hardly wait – especially when the DPD app beeped with the excitement that my parcel would be arriving the very next day. I needn’t have waited. I could have had it delivered to Torquay or Hamble. Heavens, it would even have reached me in Bembridge.

In fact, it arrived in the Conwy marina office just after breakfast (damn, I could have had it for breakfast). Instead, I would replace lunch with a coffee shake. I think it was the ceremony that appealed: They give you a special bottle with Huel written on it with your first consignment. Come to that, they give you a special T-shirt to wear while you’re shaking it up – but it was pouring with rain, and I was splashing about the place in my Guy Cottens.

With great care and only a little more excitement, I added the water up to the mark and added two scoops of the powder. I awarded myself two scoops. I reckoned the carrot and kidney bean sandwich with mayonnaise, HP sauce and beetroot   which it was replacing amounted to at least 400calories.

It did taste of coffee – cold coffee, of course – and with the consistency and sweetness of a milkshake. It was not unpleasant. I know that the average gourmet – even the gourmet with a busy modern lifestyle that does not permit a Parisian two-hour lunch break – might expect more than a milkshake, but the idea of getting 26 essential nutrients down your neck in three minutes was a novelty that could not to be denied.

There was only one problem. As soon as the bottle was empty, I looked around for lunch.

This was not supposed to happen. What about those 400 calories? What about “keeping me going through my busy day” (taking down the headlining in the loo and disconnecting all the wiring ready for the mast to come down). I was damned if I was going to make a sandwich now.

I had a mince pie.

Then a digestive biscuit.

And a cup of mocha with a spoonful of sugar.

I don’t know whether it was this, but sometime around three o’clock, I began to feel distinctly queasy.

And dinner came early. Rather in the manner of my Parisian counterpart, I opened up the packets locker and perused my menu. I could have Mexican Chilli or go for the Chick’n & Mushroom. In the end, I opted for Cajun Pasta, only because it was the one with its picture in the brochure, with mixed peppers, sweetcorn and “a kick of cayenne pepper and paprika”. I must say it did look good – rather in the same way that the photographs outside restaurants on the Costa Brava always look so good.

I doled out two scoops into a bowl. I added 200ml of boiling water (I measured it out exactly). I covered the bowl and allowed my cajun pasta to cook while retaining the vitamins which might otherwise escape with the steam.

It tasted of cajun pasta. It was not unpleasant.

I looked around for dinner.

This was ridiculous. It was lunch all over again. I decided it was my fault – after all, I’m the one who goes out for tapas and then says: “Right, where shall we go for dinner?”

The pub just across from the marina office does a passable vegetarian burger (and pre-mixed cocktails on draught,  for heaven’s sake) but that would be flying in the face of the Huel corporation’s much-vaunted economic principles: each meal costs only £2.66.

Except if you do what I did. I mixed up another bowl.

And then had a mince pie.

After that, I had to have a lie-down.

I woke up at four in the morning and decided the whole thing had been a bad idea. I still had the unopened bag of Mexican Chilli – and the Chick’n & Mushroom. I would put them on eBay (I have). I would get up and write a blog post about my experience. I could save others from making the same mistake. If I had read something like this, maybe I wouldn’t have wasted £87 and half a night’s sleep on the experiment.

Although I know my curiosity would still have got the better of me.

Just make sure you have some mince pies handy.