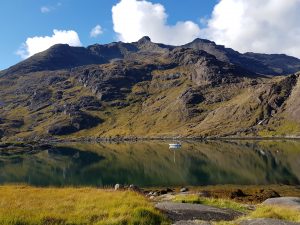 You will have heard of Sod’s Law: If something can go wrong, it will go wrong.

I would like to introduce you to Old Man’s Law which states that if you have lived long enough for Sod’s Law to wreak its havoc on your life, then a third law, the well-known Law of Averages will kick in and dictate that sometimes OId Man’s Law will prevail.

And Old Man’s Law dictates that “If something can turn out well, then it will.”

I like Old Man’s Law – and it has been working it’s magic lately.

If you are reading this in the southern part of the United Kingdom – or, heaven forbid, you are on a boat in the English Channel, you will be well aware that you have had nothing but wind and rain these past few days. Depression after depression has been tracking up the Channel as they were on rails.

I might have been down there. You may remember I was in Liverpool and had to get to Blyth in Northumberland – which, although hardly any distance at all as the crow flies, is a long way round by sea … either to the south, down the Irish Sea, round Land’s End, up the Channel, turn left at the North Foreland, across the Thames Estuary and up the North Sea.

Alternatively, I could go North, up the Irish Sea, through the Hebrides, turn right at Cape Wrath, through the Orkneys, right again and down the North Sea.

The only trouble with that was that it was already getting towards the end of September and the Autumn is not the season for sailing Northern Scotland. However, I reasoned that not only was it a shorter distance but it would be much more interesting, I was not in a hurry, I could pick my weather, take short hops…

And what has happened? The sky is blue, I have just been walking on the Black Cuillin mountains of Skye in my shirtsleeves and looking down on Samsara anchored in the pool of Loch na Cuilce, reflected in the completely still waters.

According to the book, this is “one of the most dramatic and awe-inspiring anchorages in Europe. It is wild and totally remote from civilisation.”

Admittedly, I did have to pay my dues – spending two nights of unsettled weather during which violent katabatic winds rocketed off the mountains which, in heavy weather, according to the old sailing directions ”are capable of blowing an anchor out.”

This did give me a little concern on the second night when there was a gale warning for Sea Area Hebrides – but that covers a lot of sea and, according to the last time the Windy app had a mobile data signal, the worst of the wind would be over in the West.

Besides, the anchors they had in the old days – CQRs and Fishermen – probably would have blown out. A 20kg Rocna on 10mm chain holding a 32ft bought weighing only 5000kg, can be classed as a storm anchor.

Many cruising boats do indeed carry a storm anchor – a massively-oversized brute traditionally stowed in the bilges (the most-central, lowest point to help the trim). This is all very well except for one tiny detail: When the storm arrives in the anchorage, you want that beast well dug into the bottom. You don’t want to have to be getting it out, hauling up the everyday anchor, changing one for the other while you try not to bump into anyone else or, come to that, the inconvenient bit of land you are trying to avoid in the first place…

All the same, I did wake up now and then as the boat snatched at her cable and went charging off across the pool at an angle of heel you would expect from a decent breeze and full sail.

That’s one advantage of being up here out of season. There isn’t anyone else to bump into – not a soul.