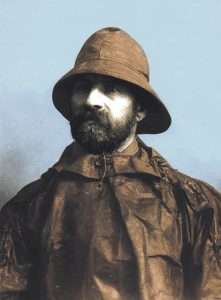 When I was eight years old we graduated from a dinghy to a “proper boat”. Torgunn was a Folkboat  – 25ft long. She had a cabin. The whole family could sleep on her. We could sail to Holland!

It was time to get properly equipped and so my father took his crew to be fitted for oilskins.

This was 1957 so they weren’t really oilskins – not sailcloth treated with linseed oil. On the other hand, no-one had thought of Gore-Tex either. These were hard PVC which stuck to itself and was cold and clammy when you first put it on – and then got hot and sweaty if you went and did anything.

My two sisters, being the foredeck crew, had trousers and smocks with integral hoods so they could crawl around with the North Sea breaking over their heads.

Father and I, being in charge of the cockpit, were more dignified in long coats and short black boots (nobody had thought of yellow boots). On our heads – or course – we wore sou’westers.

Mother didn’t have any of this stuff as far as I remember. I think the idea was that in any sort of weather that called for oilskins, somebody would have to be making tea.

By the way, this is no reflection on 1950s women on boats – after all Beryl Smeeton had sailed round Cape Horn by this time, being both pitchpoled and rolled on the way (and still countersinking the screws when she repaired the smashed deckhouse in the middle of the storm.)

And now, more than sixty years later, I have gone back to oilies.

Judging by the Facebook arguments on the subject, I won’t be the only one. Everybody seems to be asking everyone else for recommendations for the best “foulies”. For years I was a Henri Lloyd devotee – then Musto came along. Helly Hansen, I tried – and finally, with Samsara, back to Henri Lloyd.

And, of course, all of them were brilliant – warm, comfortable and dry. Also, the clever Gore-Tex fabric was able to “breathe”, doing away with all that clammy, sweaty business on the inside. I remained a Gore-Tex devotee for years.

Until this summer. You see, now I am a full-time sailor. Before, it had been weekends and holidays (five years living on the catamaran didn’t count – we tried not to go out if there was the possibility of getting wet). But now, after three years aboard a proper seaboat, the latest suit seems to be completely porous.

This revelation crept up slowly: First, the stylish jacket and salopettes seemed strangely heavy when it came to hanging them up after a lively trip. Then they were still damp the next time it came to put them on – and finally, there was the discovery that my clothes underneath were sopping wet around the knees and elbows. By the time this had reached the back and shoulders, I was asking for advice. I had washed them in special waterproofing detergent. I had sprayed them with waterproofing spray. What was going on? They were only three years old after all…

The advice came flooding in: Iron them – the waterproofing is activated by heat. Paint them with liquid Fabsil – the aerosol product is useless and expensive: Apply the stuff with a paintbrush – the more the better.

I bought three litres and used the lot – and then ironed it in for good measure.

None of this made the slightest difference. I began to suspect that manufacturers of foul-weather clothing rather like the idea of their customers spending the best part of £1,000 on a new set every three years or so.

Then someone suggested the French-made Guy Cotton clothing. It’s what fishermen wear – PVC and tough as old boots. Of course, you can’t buy it in chi-chi yacht chandlers – at least not the ones I frequent. But in a proper ship chandlers in Mallaig, I found shelves in all colours and sizes.

Well, not quite all colours: Bright orange for the fishermen or yellow and blue for the yachties. And it appeared that PVC has come on a lot in the last sixty years: This was soft and pliable. The fabric had a sort of lining bonded to the inside to take off the chill as you pulled it over your head. Naturally, there was no attempt at “breathability” – but then, as every fisherman knows, if you want to keep the water out, the best way is to keep out the air as well.

And here’s what I found: Not only is this PVC completely waterproof but I’m not even inconvenienced by the cold and clammy/hot and sweaty dichotomy: Because they don’t come with a loose inner layer to keep you from the soggy outer layer, they are much easier to put on in an emergency and take off while waiting for the next one (knowing that it won’t take long to put them on again when the emergency arrives).

All of which means that as soon as I get below, I do take them off… with the added advantage of not soaking all the cushions when finally I do sit down with that cup of tea.