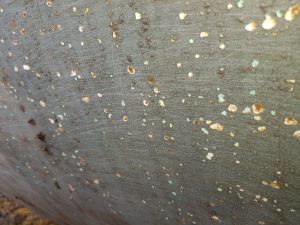 There is so much discussion about Coppercoat anti-fouling I thought I should post my pennyworth.

For non-sailors who would like to persist with this post, Coppercoat is a brand of antifouling paint intended to stop things growing on the bottom of your boat. It does this not by using the normal chemicals but copper powder held in epoxy paint. A light sanding exposes the copper and, as Nelson knew, there is nothing better than having a copper bottom.

When I bought Samsara she had about ten layers of conventional paint below the waterline. Since all of it would have to come off, it did seem like the ideal opportunity to upgrade.

Besides, she was a cheap boat. I could afford to splash out on extras.

However, I did have a bit of history with copper antifouling. Back in the 1990s, I had tried something called CopperBot on the catamaran Lottie Warren. Within a year, it developed enormous blisters.

The consensus was that because the boat had been built in a shed in Falmouth without today’s strict humidity controls, the Atlantic winds had blown a good helping of moisture into the lay-up.

That wasn’t going to happen this time. Not only had Samsara been epoxy-treated already but it was now mid-summer and anyway, she had been sitting on the hard for months. Indeed, the survey found not so much as a percentage point of moisture. The yard made a beautiful job of it. The finish was like glass.

So why did it come up in blisters three months later?

As you can imagine there were a lot of anxious phone calls between owner, yard and manufacturer (with everyone blaming everyone else).

Eventually, we all decided to blame a fourth party – the company which had applied the epoxy treatment back in the 1990s. Conveniently (or perhaps consequently) they were long-gone. Anyway, the consensus was that the treatment had been done the cheap way: Instead of three coats of filler and then two of epoxy, they had applied one of epoxy first which smoothed out a lot of the bumps so they could get away with only two applications of filler before finishing with a single layer of epoxy – which, of course, didn’t keep the water out.

Since nobody was offering to finance a new application, I decided to live with it until I couldn’t avoid painting over it.

And then something odd happened.

It didn’t get any worse.

The blisters broke and fell off, leaving little white spots like a teenager’s chin. But by the third year, I realised there weren’t any more of them. Each time she came out of the water, I photographed the problem and there seems no doubt about it: The before and after photos were identical (and the one above shows the worst of it).

Admittedly it does look a bit odd but the spots are mostly well spread out and in between them the copper does do its stuff: When I dry out against a quay in June or July to grease the prop and change the anode, I take a pack of pan-scourers underneath and, scrambling around in the mud in my B&Q waterproofs, I can clean the slime and the occasion strand of weed in a couple of hours.

So yes, Coppercoat does work. However, I would suggest applying it only to new epoxy – or, best of all, a brand-new boat.