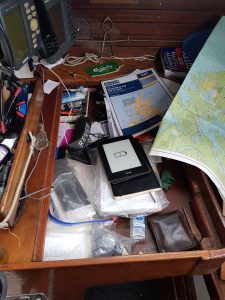 Being an old boat, Samsara has a proper chart table – big enough for a full-size Admiralty chart folded in half. There’s only one in there now – a rather battered copy of No. 2: British Isles (all the way from Brest to the Faeroes). It sits right at the bottom because I don’t use charts much anymore.

Oh, there are some Imrays trapped forever behind the bookcase but why wrestle with an armful of paper when you can use a screen the size of a paperback.

Actually, I don’t use paperbacks either. I have a Kindle.

And this is where we get to the reason for looking in the chart table. I had searched it thoroughly several times looking for the Kindle which went missing towards the end of August.

As Cal, the villain in Titanic said to his henchman: “Search the ship! There are only so many places she can be.”

There were only so many places the Kindle could be – but believe me, I had searched them all (just as I searched for the brand new snatch block that disappeared three years ago). The chart table was such an obvious place for the Kindle that I searched it several times.

I was only looking in there today because I was after the big heavy shackle that was a key part of my invention for keeping the anchor buoy from wandering off when the tide falls. I took it off because I suspected it was helping the line to wrap itself around the chain. Since we may be here in Loch Shieldaig for several days more waiting for a wind without any north in it that I thought to while away an idle 20 minutes by rigging the shackle again just to make sure.

But where was the big heavy shackle? I only took it off a couple of days ago. It must be somewhere. Everything has to be somewhere…

And the obvious place – the place where things get put if you don’t have a hall table or a fruit bowl, is the chart table.

Here’s what I found in the chart table:

Seven cigarette lighters – six of them working (I now have push-button ignition on the cooker).

Watercolour notebook with only the first six pages used.

CO2 cylinder that doesn’t fit any of the lifejackets on board.

A very organised little box containing the nail scissors I had been looking for in my spongebag, half a dozen ballpoint pens including a Mont Blanc that spent a couple of years in the bilges and will never be the same again, a fitting for the Aries lift-up gear which is no longer needed but which I plan to give away if ever I meet someone who could use it, a packet of elastic bands (they could come off the shopping list).

A pair of sunglasses with one lens missing.

A piece of plastic from which I cut a square to help with the fitting of the cooker gimbals and which might be needed again in similar circumstances.

Instructions for fitting the CO2 cylinder which doesn’t fit any of the lifejackets.

A saxophone reed (I play the clarinet).

Spare wallet (for replacing lost wallet when it gets lost).

Bicycle bell (still to be fitted).

A pair of fittings for battery terminals.

A pair of drawing compasses.

Instructions for the radar which I use so rarely, I have to look up how to work it each time.

Piece of teak that split off the toe rail.

… and…would you believe it… The Kindle, accusingly displaying the “battery absolutely flat” symbol.

I couldn’t believe it. I shrieked in delight. I danced around the cabin. I hugged the little block of microchips to my breast. I kissed it.

You must understand the significance of this moment. For more than a month, I had been fretting – wondering if should buy a new one. After all, it was the third that I had lost. The original – the one Tamsin gave me for my birthday, I lost I can’t remember where. The second (all singing, dancing and waterproof) which she gave me for Christmas to replace the first one, I left it on a train not three months later … and now this, the third, which I bought second-hand on eBay because the whole business was getting expensive…

And there it was, in the chart table all the time. It sits opposite me now, it’s little yellow charging light, a beacon of hope for all things lost.

…and sure enough, I found the shackle where I had put it, on the shelf beside the navigator’s seat, underneath all those useful bits of 3mm line with bowlines tied in one end.

As for the snatch block… well, we’ll just have to wait and see. Everything’s got to be somewhere. There are only so many places…

10 Responses to Lost and Found