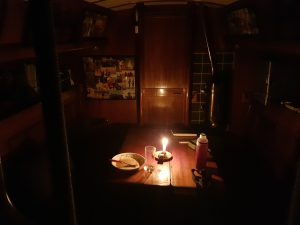 This the scene in Samsara’s cabin tonight – candlelit, as you can see. I appear to have run out of electricity

Well, not really, of course: The engine battery is still raring to go at 12.8volts but I can’t touch that – who knows when I may need to start the engine in an emergency?

Meanwhile, the service battery – the lights, the phone charger, the rechargeable DAB radio, the laptop on which I am writing this – that’s where the amps drain away.

If I was going somewhere, this wouldn’t happen. I would have the water-turbine trailing out behind, pumping in the amps (you can see it in action on the video on the “Good Health” page). But that’s no good without water flowing past the boat at more than three knots and all we get in Kirby Creek is half a knot of tide at the height of the ebb.

I do have the solar panel which I left tilted backwards on the assumption that the stern would be pointing south-east when the sun came up. Sure enough, when I looked before breakfast, we were getting a steady 2amps but I’m afraid I was profligate with my current and spent the morning charging the radio and writing up yesterday’s fishing expedition (you can’t see it yet because I’m going to show it to my neighbour and fishing companion – I never did that when I worked for a newspaper).

Anyway, the BBC forecast was for a “moderate” wind in the afternoon and I hoisted the generator into the rigging with a propeller in place of the water turbine. The trouble is that it needs 15 knots before it starts turning at all and by the time it was too dark to see, the battery was on its last legs at 11.5volts – and still draining 1.1amps. I went round turning off lights, unplugged the phone… still negative figures. Where was it going?

Of course: The masthead light comes on at dusk and helps itself to 0.2amps. Well, I knew what to do about that. Out came the trusty hurricane lamp. I had one of these on my first boat – and well I remember my father’s ritual with the anchor light at dusk.

It is rather academic in Kirby Creek – the last of the lit buoys is down Hamford Water at the junction with the Walton Channel, the best part of a mile away. Who’s going to come up here on a pitch-black night like this in half a gale?

Hang on, who said there was half a gale blowing? Last time I looked there wasn’t enough to squeeze out a tenth of an amp. Suddenly, now the battery is sucking up 1.1. I poke my head out of the hatch. The boat is heeling under bare pole. The anchor light has blown out, but who cares. I reckon there’s even enough to fire up the phone and ping this off to WordPress.