I’m not alone after all. Anchoring last night in Kirby Creek in the Walton Backwaters, the only other vessel was a tiny fishing boat on a mooring – unoccupied … and still I left 300 yards between us.

Then, today, an old man (another one) rowed acoss in an ancient weed-covered dinghy to say hello. He’d been taking his dog ashore – a liver-and-white springer spaniel and I’ve got one of those at home so we had something to talk about.

After a couple of minutes about where he could land around here without sinking thigh-deep into the mud and how he had left his friend Paul on the boat wrestling with the wiring, a small voice in the back of my head suggested it would be neighbourly to invite him aboard for a cup of tea.

Immediately, of course, another voice burst in, protested at the invasion of my solitude – and adding the age-old warning about inviting single-handers for tea (you can never get rid of them). But I know that if I keep spurning all human contact, I shall end up even more reclusive and socially awkward than I am already.

So, yes, he replied, he would delighted to come aboard for a cup of tea.

Getting him onto Samsara was a challenge that neither of us had considered.  David Haig-Thomas is 78 and you only have to look at his oil-stained sweater and his prehistoric corduroys with their missing buttons to know that he is not the sort of man to baulk at climbing aboard without benefit of a ladder.

Actually, next time I shall get the ladder out. I am still trying to remove my heart from my mouth at the memory of him swaying between dinghy and deck, his entire weight on the wobbling wire guard-rail like a clown on a tightrope.

But in the end, we sat in the cabin over our tea and he told me more tall tales in the space of half an hour than I think I have ever heard before – the dog that stole the Sunday joint from a different neighbour every week, his naked swim round the Backwaters interrupted by the picnicking family from Clacton…his father getting an island named after him…

Actually, maybe they weren’t such tall tales. I just looked up the arctic explorer David Haig-Thomas Senior and yes, Haig–Thomas Island is one of the Sverdrup Islands in the Qikiqtaaluk Region in Nunavut, Canada’s northernmost province. During the war he volunteered for the commandoes and died in the D-Day landings when young David was four.

After our tea, my guest swayed, mightily, once more and eventually settled with Susie the Springer in the ancient dinghy and set off again – whereupon Susie promptly jumped over the side and started swimming. Neither of us were sure about this, given the distance she would have to cover – even with the tide. In the end David headed for a pebble beach which looked marginally less muddy than the rest of the foreshore.

As dusk fell, I could hear an engine running and could see a blaze of fluorescent light from the little fishing boat’s wheelhouse. The wiring seems to be connected again. 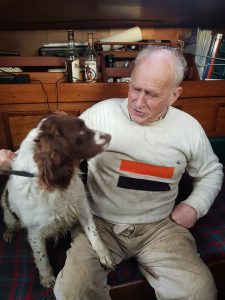