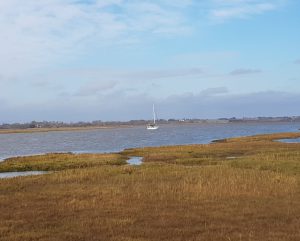 Everywhere I look, I see land. Rather muddy land, admittedly. But here, half a mile further up Kirby Creek, surrounded by saltings and winding water, with only the birds and the seals for company, I am as protected as I can be.

Last night we had a bit of wind and it barely raised a wave big enough to slap against the hull. We did heel over as a gust caught the mast and revved up the wind generator. The coffee pot fell off the cooker but otherwise, Samsara stayed as rock-steady as if she had been chocked up in a boatyard.

This was all because of The Expedition: It’s now a week since I arrived here and the water tanks ran dry on Thursday night. I have another 30 litres in cans and a couple of emergency bottles but what with that and running out of apples, the time had come to go and find civilization.

Round here, the village of Kirby-Le-Soken fits that bill. It has a pub and a shop and – presumably, a water tap. All I had to do was take the dinghy up to the head of the creek where, apparently, there is a quay accessible at high tide. That was going to be at 1234 yesterday and so I set off at about 1100, properly dressed in wet-weather gear with all the gash and the empty water cans and Google Maps on my phone to stop me following the wrong branch of the creek.

For some inexplicable reason, the outboard engine wouldn’t start. Odd, that. Now that it has a new fuel tap, it’s been very reliable… maybe all it needs is a moment to cool down – 2-stokes are funny like that. I started rowing.

An hour later, after several stops to try the engine again during which I drifted backwards into the mud and the seal, with its head out of the water like a Labrador with no ears, watched silently as if wondering what on earth I was doing.

Actually, what I was doing was checking Google Maps and realising that after an hour of hard rowing, I was still only half way – which meant that at this rate, by the time I got there, walked up to the village and back carrying 30kg of water and with the shopping on my back, the tide would be falling fast. What if I ran aground on a falling tide – marooned for eight hours in a dinghy surrounded by thigh-deep mud?

Some things just don’t seem sensible. I admitted defeat and turned round. Of course, this meant rowing against the tide. I remember thinking that I was earning my lunch and calculated how long it was since breakfast – and, come to that, how long since I had drunk half a litre of vitamin and mineral supplement and a large cup of coffee…

Casting around for a solution, I spied a jetty – well, a haphazard collection of old timbers sticking out of the mud with a few rotting planks on top. It would have to do.

Somewhat gingerly, I stepped ashore and walked up the staging to what passed on Horsey Island for solid ground. I know all about Horsey Island. It is privately owned and a bird sanctuary – no landing allowed. In fact, Tamsin and I came here in 1995 and interviewed the owner, Joe Backhouse, when we were writing about our adventures for the Daily Telegraph’s travel pages. This might very well have been the spot where Blue the dog disgraced himself by catching a Brent goose (I don’t know who was more surprised).

The place didn’t seem to have changed. It was just as desolate as I remembered – in fact, having dealt with the urgent matter at hand, I took out my phone and recorded a quick 360 for Instagram (you can see it on john.passsmore.756).

“As, you can see,” I told the commentary. “Absolutely nobody about… totally desolate…”

That was when I noticed I wasn’t alone. An equally old man with a white beard and a woolly hat arrived with two plastic bags.

I think I should be congratulated on finding something to say. This was it: “Oh, hello. I’ve just stopped for a pee. I hope you don’t mind.”

I’m afraid, I can’t remember what he said in reply (would you?). But he did ask me if that was my boat anchored further down the creek.

“Really? I didn’t know about that. There’s nothing in the books about it…”

But he did suggest I should move to one of the vacant moorings: “Anyway you wouldn’t want to be there tonight. There’s a Force Nine coming tonight.”

And with that, he climbed into the ancient dinghy and rowed off across the creek, gesturing as he went, towards an enormous orange mooring buoy and saying: “You can take that one. The boat that’s usually on it just came out for the winter.”

All I need now is for the outboard to work tomorrow. I just rang my friend David the fisherman who helped me catch a herring and a brace of whiting. He tells me I’ll get water at the pub. If I ever get there, I think I might deserve more than water.