This is a cautionary tale. It is mostly for my benefit.

I should begin by telling you that, even though I am writing this sitting on the lee berth while tacking laboriously along the South coast of Ireland in the vague direction of Baltimore, I have my phone beside me with the timer set for 20 minutes (actually 15 minutes 45 seconds because it has taken me four minutes and 15 seconds to work that out and write it down).

This is important because the more I think about what I’m writing, the less I think about where I’m going – and at the moment I am sailing at four knots in the direction of a French fishing boat called A La Garde de Dieu.

I know this – and also that the Frenchman is doing 3.7 knots so, obviously, he’s trawling which, in turn, means that everything else – absolutely everything from a supertanker to the Lifeboat and most definitely, me in my little boat – all have to give way to him. There is a good reason for this: Once a fishing boat has its nets down, it can’t stop and it can’t alter course – in fact, with all that lot hanging off the back, the rudder doesn’t work at all.

I know all about La Garde de Dieu because she shows up as an AIS target on the plotter – a little green triangle that I can click to find the ship’s name, course and speed – everything down to destination: “Fishing Grounds”. The Frenchman is four miles away. I have been able to pick him out with binoculars and, if the wind holds, I should pass comfortably ahead of him.

All the same, I set the timer because I have the laptop on my knees and I’m writing it all down – and as every writer will know, this is when you are at your most vulnerable.

I used to write for a living. In fact, I have spent more than 50 years writing. At my busiest – Fleet Street in the 80’s and 90’s – I could churn out 600 words an hour – very often dictating “off the top of my head” directly down the telephone (it was wonderful when they invented mobile phones and you could stride about while composing instead of being imprisoned in a smelly phone box while people tapped on the door with 10p pieces and said: “Are you going to be much longer?”

Of course, I ignored them because I was “in the zone”. In other words, the outside world had ceased to exist. There were only the words…

And that’s how it was about this time yesterday, somewhere in the middle of Saint George’s Channel as I sat in the same spot, a new book up on the screen and the words clattering out (I still think of them “clattering” as if this was my trusty Brother portable – the one held together with twisted paperclips – even though now the tiny plastic ASUS makes about as much noise as a mouse picking its teeth}.

Heaven knows how long this had been going on – which is the worrying part. If, instead of getting all productive, I had settled down to sleep, I would have set the timers – two of them on different phones with different ringtones. Somehow, if you’re going to close your eyes deliberately, the idea of being woken up to stop yourself running into anything seems terribly important. On the other hand, if you are awake already, surely you don’t need an alarm?

But what if the words have taken you somewhere else? A place where there is only imagination and time has no meaning?

An hour must have passed. It didn’t seem like it. Then, I swear someone said: “Samsara”.

Only that – nothing else. It was such a brief distraction that I was tempted to ignore it. I had just had the most brilliant idea and was keen to get it down before it slipped away. That’s the way it is with brilliant ideas; you have to pin them down before they flutter off and bother someone else.

However, most definitely, somebody had said “Samsara”. Surely, that must demand a moment’s attention at the very least. I cut loose a couple of brain cells to investigate while flailing clumsily after the brilliant idea.

The brain cells reported back; diffidently, so as not to disturb the creative flow: There was only one possible explanation: Since I was alone on the boat, the voice must have come from the VHF radio. Usually, this box of tricks remains silent – only waking up every three hours for Dublin and Mine Head Coastguard to issue their maritime safety broadcast. Sometimes, watch officers on the bridges of containers ships would discuss how not to hit each other – and of course, Irish lifeboats whizz about all the time chattering like teenagers on skateboards.

But now someone was calling me. I plucked the microphone from its clip: “Station Calling Samsara, say again.”

And then this charming Irish voice oozed out of the speaker: “I was just wondering what were your intentions.”

What were my intentions? Why did he want to know about my intentions? My intentions were to get back to the laptop and that brilliant idea – whatever it was. Already it had one foot on the doorstep.

I poked my head out of the hatch.

And there – no more than 300 metres away, was a great big, bright blue fishing boat bashing straight into the wind and sea, sending clouds of spray flying back over the wheelhouse.

And if it carried on doing that and I carried with my four knots for Baltimore, we would meet in the same patch of water about in about… oh… one-and-a-half minutes.

Thumbing the TX button, I suggested: “I’ll turn to port.”

And did – very snappily indeed.

For the first half hour, as our courses diverged, I made a succession of resolutions about setting the timers whenever there was even the slighted possibility of finding myself “in the zone”.

But then, as the big blue fishing boat receded to a dot on the horizon, the thought occurred that he had not appeared on the plotter. If he had, the alarm would have gone off. But the screen was blank. It was still blank – meaning that his AIS beacon must have been switched off – or as they say, when talking about Iranian tankers supplying Syria, “cloaked”.

Now, why would a fishing boat do that? The obvious conclusion was that he didn’t want anyone to know he was there – not, for instance, the fishery inspectors … or possibly the competition. There could be any number of reasons why a fishing boat might want to be invisible.

And, of course, that would explain why he had not identified himself when he called me on Channel 16 – the coastguard monitor Channel 16. Come to that, everyone monitors 16 – including fishery inspectors and other fishing boats.

I began to feel a little better. If I was at fault for not keeping a lookout – then, he was equally at fault for trying to disappear.

… and if you think that, given the length of this explanation for what was, after all, only a couple of minutes of activity (albeit somewhat feverish activity) and you suspect that I have again fallen “into the zone”, you are absolutely right. But, take heart, by now it is Sunday afternoon, I am anchored in Baltimore Harbour, the wind is making mournful noises in the rigging and the rain is going sideways past the windows – if I could bring myself to look out of them.

Actually, The Zone is the better place to be. 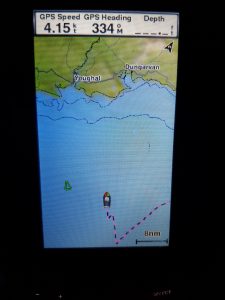 The plotter – how it’s supposed to look

One Response to The Zone