The mini-break is a great idea: A three-day weekend: All the excitement and relaxation of a holiday without having to give up any holiday time. Bridget Jones lived for the mini-break.

You can have a mini-voyage too. Anyone who wants the experience of an ocean crossing without upsetting the boss or disappointing the family has only to think small.

I was in the mood for thinking small after getting falling-down drunk over the seafood platter in Tobermory (and actually falling down).

The resulting dislocated shoulder meant that the following morning, instead of scooting south behind the spinnaker, I was having trouble lifting the kettle.

In fact, it was a full two days before the arm showed any signs of being useful again – and by that time, the wind had gone.

This was serious. I had to be back home for a family party. Naturally, I could jump on a train from just about anywhere – but that gets expensive if you start from an island in the Hebrides (even with a Senior Railcard).

Day after day, the Windy app showed the route south in a sort of wishy-washy blue with tiny arrows wandering aimlessly. I’d be fine if I were to set off for the Azores. There was plenty of wind down the West coast of Ireland. But I couldn’t start the grand voyage yet – I’d overstay my 90 days’ EU allowance (thank you, Brexit).

On the other hand, looking at the daily charts, there was something to be said for the outside route: As long as I made for a point 100 miles off Erris Head, I should carry the wind all the way – even if it did add an extra 200 miles to the route for Falmouth. I could still be there in a week.

I made an expedition to the Co-op for fresh supplies, topped up with a can of water and left after lunch.

By dusk, I had managed 15miles.

That’s the way it is with voyages – if you have 700 miles to go, there’s no point in starting the engine on day one.

Conversely, there is no point in spending the night becalmed off the coast, staying up to look for fishing boats and ferries, when you can anchor just about anywhere in the Hebrides and sleep through the night.

And sure enough, by mid-morning the next day, the wind had filled in, the spinnaker grabbed it with both hands, and we were off on a course which, if continued for long enough, would indeed take us all the way to the Café Sport and a litre of ice-cold Sagres.

But I’ll be doing that in September. For now, I was heading for a little chequered flag on the screen marking a completely arbitrary patch of Atlantic, which – according to the Windy app – was the nearest point to the coast still boasting a “green” wind. Green is between ten and twenty knots. Green is what you want – green from the right direction is even better.

And it was. Of course, I lost the twice-daily updates as soon as the mobile signal dropped out southwest of Tiree. But isn’t that all part of a voyage? If you get Windy updates, you also get emails and Facebook loons and bank statements. 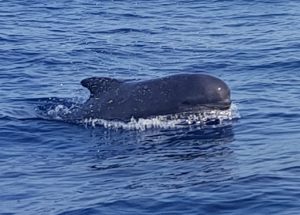 Instead, I sat in the cockpit and tried to take photographs whales. There was a small pod of them – no more than six or eight. They had the same blunt heads as pilot whales, but these swam independently instead of bunching together. Also, they were bigger – getting on for ten metres in length – and they kept their distance, not like the dolphins who swim around the bow and criss-cross under the boat. I decided I need a better phone – one with a decent telephoto lens.

I started reading Robin Knox-Johnston’s  A World Of My Own about his 1968 first non-stop circumnavigation – anyone’s first non-stop circumnavigation. It must have been more than 40 years since I last read it, and I was surprised to find that, out of the shipping lanes, he would sleep for as long as he pleased. On one occasion, he was worried that he had slept for 18 hours and missed Christmas Day!

This was interesting because, although the shoulder seemed to be healing, it ached terribly when I lay still. I knew this to be normal because, as always when something goes wrong, I had doubled the daily helping of my food supplement. When I did the same after spraining my ankle skiing, the pain woke me in the middle of the night. I presumed this must have been the soft tissue repairing itself because, in the morning, everything was back to normal.

However, on that occasion, I didn’t have an alarm waking me every half-hour. What with that and the throbbing shoulder keeping me awake for the first 29 minutes, the look-out system wasn’t working.

What would Knox-Johnston do? As I sailed farther and farther out to sea, the coastal traffic disappeared. Would it really matter if I slept for longer? The way I looked saw it, if the boat needed attention, she would wake me soon enough.

And so the sun shone, the spinnaker floated in its element, swaying gently from side to side, and the bow wave roared as the miles ticked down to that chequered flag while I slept the sleep of the afflicted (if not the just).

I am always disappointed to arrive and find that there’s no flag at the waypoint – just a limitless expanse of sea. Nevertheless, I doused the sail and turned Samsara’s head to Valentia on a brisk reach. Every three hours, the coastguard broadcast confirmed this wise decision: As predicted, there was still no wind in the Irish Sea.

There was no wind off the south of Ireland either. Look on the bright side: These were just the conditions I needed for sea-trialling the new auxiliary.

I think I have written before about my frustration without outboard motors. Back in the 1980s, when I had my previous Rival, Largo, I carried a little Suzuki 2-stroke and swung it around in one hand. To see me then, you would think it weighed no more than a loaf of French bread for a picnic.

When I bought Samsara, I set out to find another little Suzuki 2-stroke – not easy since they don’t make them anymore because of the emissions. But I didn’t want a 4-stroke. You can’t swing one of those about in one hand – partly because they weigh half as much again but mostly because if you happen to tip it upside down, all the oil leaks into the cylinder.

But the 2-storke was fine. Until it stopped working. There was always a good reason for this – as a variety of mechanics explained to me while proffering their credit card machines.

For £150 I bought what the Chinese manufacturer called a “trolling motor”. Admittedly, it didn’t go as fast as its petrol cousin, but it would push me in the little dinghy against a 20kt headwind and a harbour chop, and it would run for an hour or more if I reminded myself I wasn’t in a hurry and was sparing with top gear.

Better still, it would push Samsara in a calm – well, I presumed it would. Think about it: You can move a 10metre boat with one hand in calm water. Surely an electric outboard should get her going at half a knot.

All I had to do was find a way of fixing the motor to the boat.

This was my solution:

Yes, Heath Robinson would be proud of me. The old outboard bracket has been cannibalised with the addition of a couple of fenders to make a tiny catamaran which, secured alongside, tows the mothership rather in the manner of the yard workboat bringing her in for a haul-out.

It worked. The prototype needed a bit of adjusting for lateral torsion but it succeeded in pushing Samsara through a flat calm at more than half a knot.

For about half an hour. I think it was the jump leads that killed the idea: Getting the battery power from under the navigator’s seat up into the cockpit, over the side and down to the waterline called for 3metre jump leads. Even with the 80W solar panel on the stern gantry and the 150W collapsible array spread out on the foredeck, the voltage dropped like a barometer in hurricane season.

Still, it got me past one of the Skerries, and eventually, as always happens, the wind returned to blow us across the Celtic Sea to Falmouth.

That is to say; the wind was directly astern. By the time it reached Force 5, we were bowling down the Atlantic rollers goose-winged and reefed with everything strapped down tight.

I had to keep popping up every 20 minutes now we were back in amongst the traffic. Also, I had the aching shoulder to keep me awake.

I solved this by zipping myself tightly into my sleeping bag like a baby tucked snugly into its crib.

It’s not something I had thought about very much, but I did read somewhere that people who sleep on the streets should not zip up their sleeping bags because, if a bunch of drunks decide to have some fun with them, they will need to get out of bed and onto their feet fast.

It’s the same with people sleeping on boats with the wind behind them.

My first sensation was that I was no longer on the downhill side. The boat must have gybed. The mainsail, now backed but pinned to windward by its preventer, caused me to slide slowly but inexorably off the bunk.

It was while I was working out where my hands had got to, which of them could be moved and where the zip of the sleeping bag was hiding, that I fell directly onto the hard edge of the windward berth (now the leeward berth), hitting it – as you might have guessed – with my injured shoulder.

It was while I was lying on the floor whimpering and still trussed up like an eBay parcel that the thought came to me that nobody else was going to rescue the boat. It was just as well I was up to here with Knox-Johnston.

Yet, this was exactly what singlehanded voyaging is all about: The communing with the wilderness, the teaspoonful of philosophy, the frustrations and occasional interludes of euphoria – and, of course, the pain and the moments of sheer terror.

In eight and a half days, I experienced it all – and all without the carrots finding the time to go black.

5 Responses to The Mini Voyage