The farmer, the bull and the windlass

Did you hear the story of the Spanish farmer and the bull?

This farmer had a brand new calf and it was time for it to move out of the stable and into the field during the daytime.

But the calf wouldn’t budge out of his stall. No matter how much the farmer cajoled and rattled a bucket of grain, the calf refused to move.

In the end, the farmer lost patience, hoisted the animal onto his shoulders and carried him across the road to the field.

The next day, he tried again with the bucket of grain – and even a slice of bread (calves love a slice of bread). But no, the calf was adamant. He wasn’t going anywhere.

With a sigh, the farmer bent down, put his head under the animal’s belly and straightened up, the calf lying across his shoulders – and, once again, walked across the road to the field.

And this happened the next day… and the next. Eventually, the farmer gave up on the bucket of grain and the bread – and even the pointless attempt to coax the calf to walk by himself.

In other words, carrying the calf across the road became a habit.

But as the calf grazed the good grass in the field, he began to grow. Imperceptibly, day by day, he grew bigger – and he grew heavier.

But the routine continued and every day, as the farmer lifted the calf onto his shoulders, he grew stronger – and stronger.

And it is said that if you go to a particular village in Andalucia early in the morning, you can see a crowd gathered around a farm gate to see an old, grey-haired farmer walk across the road carrying a full-grown bull on his shoulders.

I don’t know where this story came from but I’ve always loved the moral – which, of course, you can work out for yourself.

And I have been reminded of it over the past few days because of the anchor windlass. If you look back through this blog you will find various references to the windlass. It has worked on and off for the past two years. From time to time – for no reason that I can deduce – it will just go “click” instead of winding in the chain. I have checked everything that can be checked. The brilliant electronics engineer Art Butler of Deben Marine Ltd has toiled over it on several occasions – most recently, only a couple of weeks ago when he drove up to Lowestoft to clean the commutator. He even ordered a special cleaning implement for me so I could do this myself.

And what happened on Saturday evening in the Falmouth Haven anchorage with an hour to dusk and a spritely 20knots blowing across the deck?

I couldn’t believe it. I hadn’t used it once since Art’s ministrations. Of course, the only thing to do was pull the thing up by hand. I had always assumed that with a 20kg anchor on the end of 10mm chain and me being an old man of 70, this was not an option.

But I did pull it up. I took it slowly, nipped back to the cockpit from time to time to drive the boat forward – and then back again to break out the anchor.

And I’ve been doing this ever since – twice when I sailed overnight to Plymouth and anchored in Barn Pool, did a short stay in Mayflower Marina to pick up the spinnaker and then back to the pool before returning to Falmouth the next day. Here I anchored off St Just and then moved last night to Falmouth banks ready for the overnight wind shift.

And, just like the farmer and his bull, I began to get into the habit. The secret, I found, is to take your time and let the boat move up as the weight of catenary takes over the pull – and wear gloves, of course. Eventually, you end up with the chain straight up and down and the anchor still well dug in. Breaking it out is going to be really hard work so this is where you put the engine into reverse and, once again, let the boat do the work: As soon as she starts to move back showing that the anchor is free, click into neutral and now all you have to do haul up the remaining chain and the anchor itself.

Of course, the deeper the water, the more there is to haul up. At the moment, on Falmouth bank just after low tide, I have 8.6metres from the bow roller to the bottom which means 17kg of chain and the 20kg anchor – a total of 37kg to begin with, but of course, less as it comes in (and I begin to tire).

I know there will be times when this last part of the process has to be completed in double-quick time as the boat begins to drift; but if the worst comes to the worst, I can leave it dangling for a moment or two while I nip back to the cockpit.

The odd thing is that, as I get more confident, I am beginning to see the benefits: For a start, I can stop paying Art to come out and try and fix it. The last resort of sending the windlass back to Lofrans might not be necessary after all…

Also, if I can do this now – and continue to do it every few days from now on, then presumably I will still be doing it when I’m 80 – and won’t that be something to be proud of!

Is it possible that I may be able to remove the wretched thing entirely? That would reduce the clutter on the foredeck – and take 25kg off the bow which would do wonders for the trim.

Do you think that, just like the Spanish farmer with his bull, I might attract a bit of a crowd? 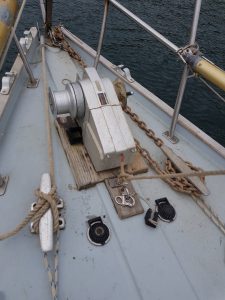 Update May 22nd 2019: Of course, the real test was going to come when I had to lift all 50 metres of chain vertically. That was going to weigh 120kg…

Well, of course, if all of it was hanging straight down, that would mean I had anchored in something like 250m – and I can’t imagine anywhere I would want to do that.

It happened in Loch Spelve on Mull in the Hebrides. The corner sheltered from the South Westerly right down at the end of the left-hand spur looked just right – except that it shelved so steeply that either I was going to be in 13metres or on the beach.

It had to happen sometime. I let it all out. Adding 2m for the difference between the depth transducer and the bow roller, I should really have had 51m but in fact, given the necessary amount on deck and slack on the snubber, there was probably only 49m.

Still, it all had to be hauled up – and the vertical lift would be 50kg. I left the engine ticking over ahead and started pulling. Once the chain was going into the water sideways, I sauntered back to the cockpit and clicked her into reverse (which gave me a chance to catch my breath).

Then, back to the foredeck and more hauling. The blue and yellow 35m markers appeared, then the white and yellow 25m.

It was at about this time that the people on the little motor-cruiser from the other side of the anchorage returned from taking the dog ashore in their RIB. They made a detour to get within hailing distance: “Do you need any help?”

I hadn’t realised I looked as though I was struggling. I must say, I was slightly disappointed… which sounds churlish.

I did get it fixed (new control box) but then, in Alderney, UK Channel Islands, anchored in 11.5metres in a 25 knot wind and with 47metres of chain out, the windlass packed up again. I reckoned I had 12 hours to get the anchor up and scoot across the channel before a forecast northerly gale set in – Alderney being no place to get caught in a northerly gale.

In fact, it was a lot less trouble than I expected: I put the engine in slow ahead and pulled in a metre of chain, belayed as the boat veered to one side and the chain became taught. Eventually, her head swung through the wind and the chain went slack – pulled in another metre.

This process continued and I later realised another benefit. Each time the pull changed direction, the anchor must have been rocked from side to side, loosening its hold. Eventually it came up without my even noticing when it broke out.

5 Responses to The farmer, the bull and the windlass