OK, so this is what you do: You take two men, one very skinny, one very stout. You lay the skinny one down on the quayside and get the stout one to push him gradually over the edge.

When half of the skinny one is sticking out over the harbour, he will fold at the hips, his top half flopping down against the wall (at this point, it is important that the stout one stops pushing and, instead, hangs onto the skinny one’s feet for all he’s worth).

This will enable the skinny one to reach down under the water and untie the dinghy painter from the ladder – where they secured it before going to the pub.

And before the tide came in.

I know this is the correct procedure because, years ago, I read a careful explanation in The Confessional column of Yachting Monthly.

Moreover, the participants were none other than the editor himself, Andrew Bray (the thin one) and his deputy Geoff Pack (the stout one).

The fact that two such experienced yachtsmen should find themselves in this predicament gives all us lesser mortals a good deal of comfort.

All the same, I spent half an hour poring over the tide tables. This was an expedition, and it had to be planned accordingly.

The whole sorry business began as I sailed very slowly the six miles from Inner Farne Island to the mystical land of Lindisfarne. On the way, we passed Bamburgh Castle standing on the shore above those vast Northumbrian beaches and looking so imposing that it just cried out for a closer look. 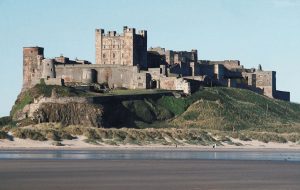 Besides, I needed an expedition before the family walking weekend in the Peak District. I didn’t want the younger generation thinking I couldn’t keep up. Anyway, I had my new boots to break in. The 18-minute walk to the bus stop promised by Google Maps would be a good start.

All I had to do was be sure to return at the same state of the tide as when I left. In other words, before it rose above the point on the harbour ladder where I had secured the dinghy.

There is something else you need to know about an expedition from Lindisfarne; something pilgrims have known for more than a thousand years: It is an island. If you try to cross the causeway at the wrong time, the North Sea will come rushing in and sweep you away to a watery grave.

This doesn’t happen nowadays, of course. Now it’s just the cars that get swept away. The people scramble up a set of rickety steps to a wobbly-looking shelter and wait until the tide turns. 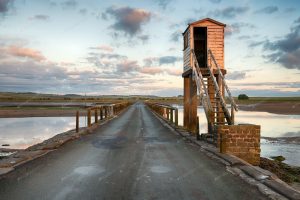 The causeway with its refuge for stranded pilgrims

That wasn’t going to happen to me. Along with the tide and bus timetables, I had consulted Northumberland County Council’s “safe crossing times” website.

Everything would have been fine if only Google Maps’ 18-minute walk hadn’t taken 2hrs 40mins. I think they had measured from the wrong end of the island.

Of course, this left me with a dilemma: Would I be back in time before the road disappeared? Would the tide come up and submerge the harbour ladder?

Or would Something Turn Up?

I am a great believer in Mr Micawber and his splendid philosophy. I pressed on, passing the Lindisfarne Inn and its “Bunkhouse” – presumably for stranded pilgrims.

Sure enough, just as I reached the main road, a bus pulled up. I ran for it.

Normally, I do not run for buses. My life these days is lived at a sedate pace. Running for anything is behind me. Actually, it is beyond me.

But this time, gasping and red in the face, rucksack with sandwiches bouncing on my back, I chased that bus as it pulled first into the service station, then to its designated bus stop – and finally, finding no-one waiting, away again and back to the main road.

And there it stopped. Anyone who has waited for a break in the traffic on the A1 will confirm this. The bus was stuck, edging forward, airbrakes hissing, nudging at the passing cars.

I pounded after it. People at the petrol pumps cheered me on. Small children ran alongside like pacemakers in a marathon. I was making an exhibition of myself – but surely someone would take pity and give me a lift…

They didn’t need to: Panting and spluttering, fumbling for my face-covering and my bus pass, I hauled myself aboard.

It was the wrong bus.

This was not apparent until we were on our way. They say the Northumbrian accent is the most impenetrable of all – and the more the driver tried to explain, the more excited he became and the less I could make out a single word.

Anyway, there was nothing I could do. We were heading for Newcastle.

Then something turned up. After half an hour, we stopped at a place called Belford where the driver and all the other passengers urged me to get off – at least I think that’s what they were saying.

It turned out that we were parked behind another bus – the one for Bamburgh.

Indeed, it is a wonderful castle. I wandered the state apartments. I saw the dungeons – the bottle-shaped doorway where horsemen could enter at the gallop. However, eating my sandwiches on the battlements, there came the nagging thought of that 2hr 40min walk back. Not only would the tide be coming in, but it turned out my new walking boots were a little on the large side, and now I had a blister the size of a sovereign.

So I left early, missing a visit to Grace Darling’s grave – Grace Darling, the Victorian lighthouse keeper’s daughter who rowed to the rescue of a Farne Island shipwreck and is buried in Bamburgh churchyard (her effigy clutching an oar).

The bus took me all the way to the service station – although, as we now know, that is a long way short of the jetty.

But wait: What more could turn up? Another bus stop. A bus to the island – one that I never thought to investigate because who needs a bus when you can walk it in 18minutes?

Of course, the only trouble was that, like everything else, the bus was limited to “safe crossing times”, which meant that the timetable had been contrived by a cryptic crossword enthusiast. There was a table of dates – each with a corresponding letter. The letters referred to a table of “safe crossing times”. If I decrypted it correctly, the bus would get to the jetty just in time for me to untie the knot before it disappeared underwater – providing I could find a stout person to hold my feet.

To be on the safe side, I stuck out my thumb. I had tried this on the outward journey – after all, it worked in France in 1967. But times had moved on – so did the traffic.

Once again, I trusted something to turn up; this time, a battered hatchback with an ex-merchant seaman. He had come to pick up his girlfriend because it looked like rain.

The sun kept shining, so he took me all the way.

With ten minutes to spare.

8 Responses to The Confessional