The Best Sailing in Europe

The authors of the Clyde Cruising Club’s pilot books are gentlemen not given to hyperbole.

One assumes they are gentlemen – with starched collars and whiskers and deckhands in the fo’c’sle to work the vessel. After all, their guide to the waters from Kintyre to Ardnamurchan begins with a poem from the Log of the Blue Dragon in 1903.

Advice for a passage through the fearsome Gulf of Corryvreckan is that it should be taken in calm weather, at slack water – and then goes on to recommend that “all hatches should be closed and all crew would be well advised to have a lifeline attached if going forward”.

So when they say that this stretch of coast and its outlying islands offer some of the best and most varied sailing that can be found anywhere in Europe, it is time to sit up and take notice.

So why didn’t they mention that it is like going back to school? I have just spent more than an hour with the Gentlemen’s comments, the tide tables for Oban, the two charts that cover the area in question – and an exercise book which is rapidly filling up with information such as “Firth of Lorn: SW going 0600 – 1225 BST (then clockwise)” and “Ardinamir to S point of Luing: 2 miles (anchorage Kilchattan Bay – await north-going stream through Sound from 1225 BST – then Loch Spelve?”

I put that down only because Tinkers Hole was looking doubtful with a North Westerly. Or, of course, I could just stay in the Sound of Jura which gives me such options as Lowlandman’s Bay or going into Loch Sween…

The trouble with “The Most Varied Sailing Anywhere In Europe” is that there are too many options. I’m not even going to bother to count the number of possible destinations just for tomorrow.

Or, of course, I could just stay here.

“Here” is a tiny little hole in the rocks between Luing and Torsa called Adinamir. It boasts, according to the Gentlemen “a notorious narrow entrance” – and it is. First you have to identify a white cottage, then a gravel patch, after that a white mark on the shore then a green perch and then a red perch with only a metre of water between them at low tide – and when you get there, holding is “sometimes poor in weed”.

But I had no choice: Luing has a Post Office and I had a letter to post. More remarkable, Luing has a working phone box – with a telephone directory on the shelf. Hebridean islands are not like other places: The population of Ardinamir is 162 (ten children in the primary school). At the end of the 19th century the census counted 632 – but that was with the slate-mining in full swing. Now it’s holiday cottages, a bit of lobster-fishing and curious brown cattle inspecting the solitary visitor on his way to the Post Office.

In fact the solitude – the sense of temporarily being somewhere off the planet – is almost tangible. Sit in the cockpit in the evening and time seems to stand still… for the very good reason that the evening lasts until nearly midnight.

In fact, just to test it, leaving Loch Spelve for Jura a few days later – and not having pinged off the blog post because there was not so much as a smidgeon of a mobile phone signal – it seemed like a good idea to sail overnight just for the experience. Twilight lasted from after dinner until I dropped anchor in Loch Tarbert in broad daylight in time for breakfast at 5.00 a.m. 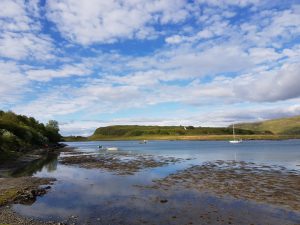 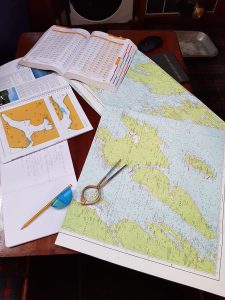 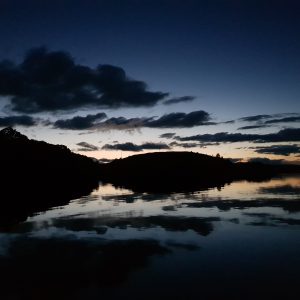 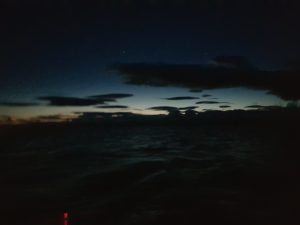 Midnight on passage to Jura

4 Responses to The Best Sailing in Europe