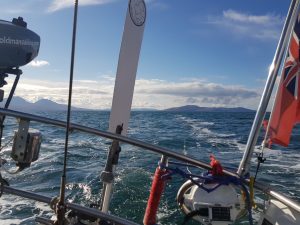 It’s a terrible thing to have to admit but the Pilot book for the Hebrides was still in the bookcase. This revered collection of wisdom, researched over generations by the bewhiskered gentlemen of the Clyde Cruising Club is said to be essential for sailors in these unpredictable northern waters.

Now I was out of the Irish Sea, maybe it was time to get serious – to stop navigating by mobile phone as if I was in an unfamiliar high street and Googling “pub near me” – and since I would be going north rather than south to get from one side of the country to the other, I had it fixed in my mind that I wanted to go to Tinker’s Hole.

Tinker’s Hole, on the far western extremity of the Island of Mull, had been a must-see destination for years. The new generation of Clyde Cruising Club gentlemen describe it as one of the most popular on the west coast: “In places it is less than half a cable wide and on the east side the shore consists of sheer walls of pink granite.”

All I had to do was get to it. Meanwhile, Islay was in the way. I’ve been to Islay – pleasant enough and lots of whisky but when you’ve done one distillery tour…

The obvious thing to do was keep plugging on: I was already two days out from Carlingford Lough, what was another 24 hours? I set a course to round the twin peninsulars of The Oa and Orsay at the end of the Rhinns of Islay. By the time I got there I would have a hatful of wind – force seven on the nose according to the forecast – but once I turned the corner, it would be with me. I set a waypoint a mile off the Oa, adjusted the Aries and Samsara romped off on her adventure.

Since she didn’t need me, I thought it might be a good idea to get the book out – after all, some of these islands up here set up tidal races off the headlands…

What did I find: “Because of overfalls, both the Oa and the Rhinns of Islay should be passed at a distance of several miles”.

But, clearly, that might not be enough to make the pluckier mariner see sense, so there was this as well: “Some of the worst overfalls in the UK extend for up to 8miles WSW of Orsay where there is an underwater cliff 50-75metres high. With any sea running at all the area must be avoided.”

OK, point taken. I slipped into Islay’s Kilnaughton Bay just as the sun was setting.

A good dinner followed by a taste-test to compare Lamb’s Navy Rum with Aldi’s £9.99 alternative, an episode of the new series of Ghosts on iPlayer – and not having to wake up every 20 minutes all through the night… sheer luxury (even though I’ll have to watch Ghosts again because I fell asleep.)

3 Responses to Must be avoided.