His name was Ibrahim. He was a Baghdad taxi driver, and he drove an ancient orange Toyota the size of a tank.

However, as far as I remember, Saddam Hussein’s Russian-built T54s did not boast detachable dashboards. It was behind the dashboard that Ibrahim kept his international currency exchange.

As a keen young reporter for the Daily Mail in 1980, this was my first big foreign trip – and my first experience of employing a “fixer” – that essential combination of guide, translator, bodyguard and banker.

Over the years, I went on to know a variety of fixers. There was “Pipa” the rock-star (as far as the Czechoslovakia music scene was concerned). “Pipa” is the Czech word for the tap of a beer barrel – although his real talent was a fantastic news sense as he translated the morning papers over room-service breakfast.

“High-Tower” was the Beijing student (so-called because, unusually among the Chinese, he was well over six-feet tall). He made me sound authentic by peppering my copy with Confucius.

There was the taxi driver in Sri Lanka who took me to see the Tamil Tigers with an open can of petrol between my knees. We couldn’t put the cap on it because this was the fuel tank ever since the one at the back got full of bullet holes.

Partly, this was because the exchange rate into the local currency was heavily weighted in my favour – but mainly, what I needed was loyalty.

Anyway, it wasn’t my money.

Now I think about it; there was also the man with dreadful teeth and a wall-eye in the fly-blown tea house on the Jordanian border who offered to get me a ride into Iraq in a sanctions-busting lorry if I came back at midnight…

This was the era of the hostages John McCarthy and Terry Waite. Midnight found me back in the bar of the Amman Intercontinental drinking brandy and sodas out of half-litre glasses.

All of this comes to mind because I am back in the third world and, once again, I need a fixer. I sailed from the Canaries directly to The Gambia, that tiny country on the west coast of Africa which consists of nothing much more than the river – up which (130 miles up which) I would see hippos and crocodiles and the legendary Baboon Island.

The aspect which seemed to get lost in translation is that The Gambia is now a very, very poor country. The previous president (now in exile in Equatorial Guinea) sought to get a leg up by accepting Beijing’s offer to build roads and bridges. They needed roads and bridges to service the fish meal factory they had slipped into the small print.

To support the factory, a veritable navy of Chinese trawlers moved in hoover up a little fish called the sardinella – which just happened to be the Gambians’ staple food.

No more sardinellas also upset the ocean food chain and killed off the big game fishing industry – which, in turn didn’t do a lot for the tourism (the smell of fish meal drifting over the beaches didn’t help).

So last year, the locals set fire to the factory and 40 Chinese fishing boats – although the only building they managed to destroy completely was their own police station.

One way and another, the country is in a desperate state, and it seems that everyone is looking for a job. Never mind, Passmore arrived looking for a fixer – several, in fact.

Muhammad was brilliant. He knew everyone. It was only later – after we had settled on a price for his services – that I remembered it wouldn’t be coming out of Lord Rothermere’s spectacularly deep pocket but my own rather modest cruising budget. Checking with Facebook friends, it appeared I had promised Muhammad many, many times the going rate.

Too late, he’d already shown me a picture of his baby daughter – they all do this. Ibrahim in Baghdad had a daughter who was diabetic. When I got out to Jordan, Lord Rothermere invested in a year’s supply of insulin (which probably ended up with the wall-eyed man in the fly-blown tea house.)

As I progressed up the river, I toughened up my negotiating skills, but it’s no good, the boat kitty would keep a family for a year – and the children are terribly cute.

But I  did get to see the chimps on Baboon Island (well, one of them) and heard a hippo in the night – they sound like Winston Churchill getting out of the bath. I missed the crocodile, though – despite rowing out at dawn in the little inflatable.

Maybe that was just as well. I’m not sure a little inflatable is recommended for a crocodile hunting.

Now I’m back at Lamin Lodge – the wood and corrugated iron restaurant open on all sides to catch the breeze above the mangroves. Mahmood,, the waiter, keeps me supplied with refreshments, and Bamba the drummer provides a background rhythm. As a temporary office, it beats all the Hiltons and Intercontinentals into a cocked hat. 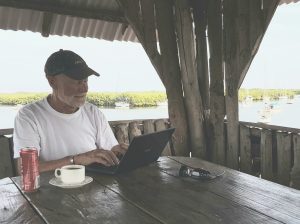 If you look closely at the picture, you can see Samsara anchored just next door – where Karim turns up every morning on his paddle-board to deliver fresh bread and collect the laundry. 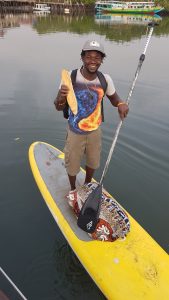 Karim with the bread (and the laundry)

What did  I say about leaving… 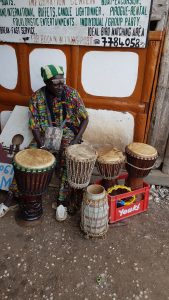