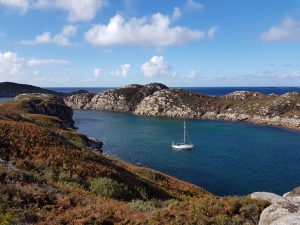 When the engine stopped just as I was getting away from Port Askaig, I could have scrambled to get back in. In the light of events, maybe that is what I should have done – but instead, I turned the key again, the engine started once more as if nothing was the matter and so I assumed it knew best.

All the same, I did hoist some sails very smartly indeed. And sure enough we had a cracking sail up to Mull… until the wind died again. With only ten miles to go it seemed a good idea to motor the last bit.

That was when I started to worry once more. Sure enough, after about an hour, the steady thump of the diesel paused, stuttered… and stopped.

I turned the key. It started again.

This was all very well in the open sea. What would I do if it happened just as I reached my destination.

Tinker’s Hole is one of the most popular anchorages on the west coast of Scotland. What makes it so special is that it is tiny and entirely protected by series of small islands. You tie your dinghy to a rusty ring set into the pink granite cliffs and scramble up to enjoy a vista of complete wilderness.

Threading your way in between the rocks with less than half a cable of space between them is no place to be becalmed if the engine stops.

Curiously, I don’t remember considering that I should call off the visit – head for somewhere sensible that I could sail into (and out of, come to that). I suppose I assumed that both times the engine had stopped, it had started again – and anyway, I would have to be pretty unlucky if it stopped at exactly the wrong moment just as I found myself up-tide of the rock (dries 2.3m) just off the entrance or in the middle of the entrance itself (less than half a cable wide). Before then, I could sling out the anchor – it was only 10 metres deep. Once I was in, I would be anchoring anyway.

The engine waited until I was in before it stopped. In fact, I was no more than a boat-length from the exact spot where I proposed to plant the hook. That was why we were idling in neutral. Clearly, the machinery had decided that if it wasn’t going to be called upon to do anything useful, then it might just as well shut down now… and did.

We ghosted to a halt and I lowered the anchor through five metres of clear water to rest nicely between two patches of weed. Now all I had to worry about was getting out again. Still, that could wait for the morning.

But in the morning the only other boat in the anchorage had gone. Samsara was all alone and I couldn’t pass up the opportunity for a photograph. So, straight after breakfast, it was into the dingy to row over to the rocks no more than 15 metres away and then climb up through the bracken and over the heather to the hill where – apart from spectacular views, it occurred to me there might be a mobile signal.

I stayed four nights in Tinker’s Hole which must be a record. There was a good deal of fussing over the engine but I couldn’t for the life of me find anything wrong with it. In the end, it seemed the obvious course would be to put into Tobermory before heading off into any more wilderness. There would be a mechanic in Tobermory, for sure. Besides, it has to be one of the prettiest harbours anywhere with all the houses painted different colours.

However, until I had a reliable wind, I wasn’t going anywhere.

This meant that on the second day, I packed some sandwiches, a can of beer and a Mars bar and set off on an expedition, returning five hours later utterly exhausted. The scramble up the hill the previous day had been the easy bit. This time I stumbled through shoulder-high undergrowth, climbed cliffs, fell into ravines and more than once wondered what I would do if I broke a leg.

In the end I came to “The Community of Erraid”. In happier times, I would have said hello but we don’t do that any more, do we? There was a tube of hand-sanitising gel on the gate to remind me. This is what it must have been like travelling during the time of the plague.

I have since looked them up. On the Isle of Erraid, live a small community who, in their own words conduct “a dynamic experiment where everyday life is guided by the inner voice of spirit, where we work in co-creation with the intelligence of nature and take inspired action towards our vision of a better world.”

If this had been in ordinary times, I imagine I would have a lot more to tell you about them. All I can say is that I saw people at a distance and we waved to each other.

Meanwhile, the longer I stayed in Tinker’s Hole, the more time I had to worry about getting out. For a start I wasn’t going to attempt it until we had some wind (hence the four days). At one point, I had decided I would have the kedge anchor on deck, the dinghy towing astern ready to row the anchor out to haul myself off the rocks if the wind should die at the wrong moment. In the event, I did no such thing but sailed out with the engine ticking over without the slightest problem.

But I was going to have to do something about this. My nerves couldn’t take much more… 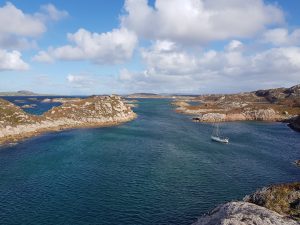