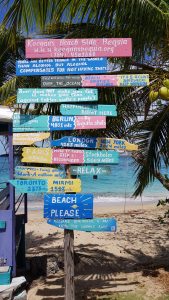 The rum punch in De Reef beach bar was a mistake. I thought I was in Keegan’s beach bar – but then there is a beach bar of some kind every few yards along the mile and a half of Bequia’s coastal path.

Keegan’s had seemed rather special because it had a wonderful signpost with the mileages to New York and Berlin and London (4,283) and aphorisms such as “There are better things in the world than alcohol – but alcohol compensates for not having them” and “A Rum Punch a day keeps the worries away.” 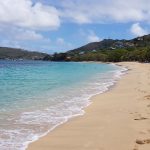 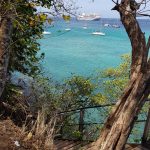 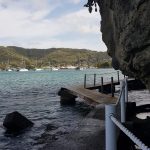 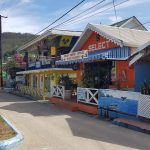 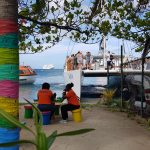 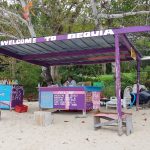 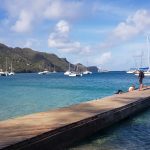 The whole Island seems to consist of beach bars and rum shops and people in flip-flops and T-shirts saying “Sail Fast – Live Slow”. It’s been like this ever since it first became a Mecca for Caribbean sailors in the 80s.

In those days, it must have been like St Tropez was in the 60s. Now there are cruise ships in the bay and a man in uniform to shepherd me politely off the dinghy dock – even though I tied up there yesterday without so much as a by-your-leave.

And that’s another thing: In Grenada you chain your dinghy to the dock with a couple of stout padlocks and haul it out of the water at night in case somebody pinches it.

In Bequia nobody bothers.

It’s pronounced “Bequé”, by the way to the people in the know. I wasn’t in the know either when I first read about it back in the 90s. But it’s been moving up the bucket list ever since, and as soon as I got the boom welded back together, I set off north. It was only 40 miles.

Of course, all the best destinations require a bit of effort – so it took 18 hours, a torn headsail, the mainsheet parting company from the end of the boom and my dinner leaping off the chart table and upending itself all over the floor.

This may have been my own fault (actually, everything was my own fault – it usually is) – but, honestly, who was I trying to impress, attempting to eat off a plate with a knife and fork in 25knots of headwind?

It was a good thing I made enough for a second helping – and that was taken properly with a spoon out of the saucepan, feet braced against the leeward berth and pan-handle at 120°to the angle of attack.

But Bequia was worth the effort. This is a place that does not just welcome yachties; it seems to have developed entirely for our benefit. Every morning the boat boys whizz about distributing fresh baguettes and croissants. An extraordinary bright yellow trimaran can be summoned alongside to fill you up with fuel and water, provide a bag of ice for the Rum Punch and take away your dirty laundry. 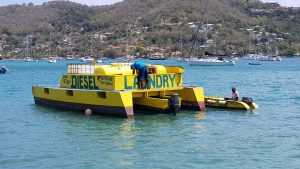 I felt a bit mean that I hadn’t hoisted a proper courtesy flag. But think about it: there are 40 nations and dependencies in the Caribbean, and every one of them has its own ensign – so I bought a string of “Caribbean Bunting” off eBay and proposed to cut off the appropriate bit as required.

It looks rather cheap, flying there from the signal halyard like an afterthought – as if I don’t care any more about protocol than your average Frenchman. The French don’t even worry about their own ensign.

But, on the island where “living slow” is a way of life, who’s going to care?

It may be different in Mustique, tomorrow…

P.S. If you have been tracking me on NoForeignLand, you may be surprised to find that, apparently, I am in the middle of the Amazon rain forest. I have no idea why, and quite honestly, I’m beginning to find the whole site more trouble than it’s worth.

So I’m going to abandon it.

There are various ship-tracking apps where you can find me by entering the British ship Samsara and the MMSI number 232010712. The best seems to be Marine Traffic (Findship still has me in the Cape Verdes.)