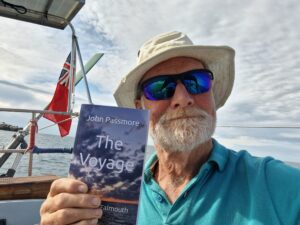 When I returned to the UK from the Caribbean, people asked: “Did you have a good trip?”
And I said: “Yes, lovely, thanks.”
Because it was – but it was more than that. As with any voyage, it had its own special character – the moments that will remain in the memory forever (and others which are probably best forgotten).
Following on from the interest in my lockdown cruise, which led to the Old Man Sailing book, I found myself wondering whether people might like to read about this as well.
I had no idea if it would be any good – after all, there were no moments of drama, nothing important broke, nobody ended up getting rescued. It was just… ordinary. And yet, what came out of those 44 days and 3,437miles was a sort of stream of consciousness – everything from random thoughts that popped into my head because, apparently, there was nothing else in there, to what I ate and read and listened to…
At one point, I appear to have made a pet of a baby Portuguese Man o’ War. I called him Arnold – remember this was six weeks with no contact with the shore; no satphone, no high-frequency radio, no emergency beacon. No news of Boris Johnson’s downfall, come to that.
And yet, when I read it through, it seemed to be anything but dull. I stared at the words on the screen and remember saying out loud and unexpectedly: “D’you know, this is rather good…”
(There was no one to contradict me.)
So, now it is out there for the world to judge – or at least the world of Amazon – it is available as a Kindle edition and also in paperback – just a little book with a small price.
As you will see, it is called “The Voyage” with the subtitle: “#1: BVIs to Falmouth.” If it’s a success, I could write #2: Canaries to the Bahamas – maybe even #3: Panama to the Marquesas. This thing could run and run…
I would be most interested in seeing what you think of it – don’t forget to leave a review.
Otherwise, there’ll be no stopping me.