Where have all the dolphins gone? 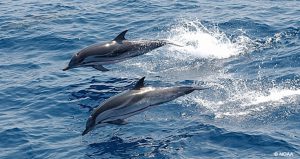 I have just been reading Leslie Johansen Nack’s book Fourteen about sailing the Pacific and this is her decription from 1974:

Seeing the dolphins every single day never got boring or old. There were often twenty or thirty dolphins, maybe more because it was hard to count when they all came up at different times…

It reminded me of the passage in Bernard Moitessier’s The Long Way:

I hear familiar whistlings and hurry out, as always when porpoises are around. I don’t think I’ve ever seen so many at once. The water is white with their splashing, furrowed in all directions by the knives of their dorsal fins. There must be close to a hundred… A tight line of 25 porpoises swimming abreast goes from stern to stem on the starboard side, in three breaths, then the whole group veers right and rushes off at right angles, all the fins cutting the water together and in the same breath taken on the fly. I watch, wonderstruck. More than ten times they repeat the same thing…

What he is describing here is the legendary incident when the dolphins warned him that Joshua was heading straight for the rocks on Stewart Island at the Southern tip of New Zealand. That was in 1968.

And between 1987 and 1991 when I sailed twice from Falmouth to the Azores and back and competed in the OSTAR to Newport, barely a day went by without a visit from dolphins or whales.

Yet this year, returning to ocean sailing, with a passage from the Western Isles to the Azores and then back to the Solent, I think I could count the sightings on the fingers of one hand.

Was I just unlucky or is this an example of what we are doing to the planet and its wildlife?

Or is it, as Douglas Adams suggested in his Hitchhikers’ Guide to the Galaxy follow-up So Long and Thanks for all the Fish, simply a case of the most intelligent life-forms leaving The Earth by “their own means”?