The Sunk Traffic Separation Zone and other adventures

It was a great idea. I even sent the family WhatsApp group a message saying I would set out at dawn the next day instead of starting the voyage with a rainy night.

Well, I didn’t have a drop of rain…

The plan was to sail from Walton on the East Coast to Chichester on the South coast – a distance of some 150 miles which I reckoned to do in not much more than 24 hours – especially if I could catch the tide all the way across the Thames Estuary like I did on the way up last year.

In the event it took me 58 hours – that’s nearly two and a half days!

Mind you it was great. I loved every minute of it…

The first excitement was experimenting with Samsara’s downwind rig. This is somewhat innovative and was contrived by her fastidious previous owner who made such a success of refitting her cabin. Since “downwind” to him meant trade wind sailing, he dispensed with silly contraptions like spinnakers and wrote a careful explanation of how to rig the staysail on the inner forestay with the sheet led through a snatch block on the end of the boom (hauled forward with a preventer). The main could then be furled. After that, with the furling jib on the end of the spinnaker boom the two headsails could be adjusted without leaving the cockpit.

That may be so and, I’m sure, very useful when shortening sail as a rain squall creeps up on you in the middle of a jet-black night on the way to Antigua. However, to arrive at this happy position, requires setting up all those control lines.

Don’t worry, the fastidious previous owner had drawn them out and left a copy in the file. Here it is. 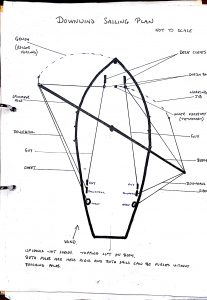 As you can see, there seems to be a lot of string involved – and don’t forget the footnote about “Uphauls not shown”. I studied this diagram and I looked at a lot of YouTube videos and finally decided that if the staysail was going on the end of the main boom (had to be the main boom because the diagram shows the topping lift is used as the uphaul), then why did I need both a spinnaker pole and a whisker pole?

And now I had a chance to try the rig on the way along the “suggested yacht track” out of the approaches to Felixstowe. The first thing I learned was that, because the main boom cannot be brought forward of the shrouds, if there is a wind shift, then the whole thing has to be dismantled and set up again. It cannot be gybed.

I did this. I may get better with practice but just now it represents a serious flaw. What it needs is for both headsails to be on their own booms (whisker pole for the staysail and the, longer, spinnaker pole for the furling headsail.) In other words what I need is a spinnaker pole … on the foredeck, not in the shed…

Never mind, the wind gave up in exasperation. From the afternoon into the evening, progress became more and more sporadic until, at one point, I was reduced to starting the engine to avoid a cargo ship that seemed intent of stalking me through the Sunk Traffic Separation Scheme (I’ve just realised how odd that sounds).

In the end, just when I should have been looking up the pilotage notes for entering Chichester, I found a quiet spot down-tide of the Thanet Wind Farm and dropped all sail to get some serious sleep – in short snatches, of course. It wasn’t until four in the morning that I poked my head out of the hatch to look around and felt the faintest stirrings of a breeze.

That was enough: Stumbling around in the pitch-black night with a head-torch I set about rigging the temporary forestay for the genoa – and some time later we were on our way at a sedate two knots. What I didn’t appreciate at the time was that this was going to turn into my best day’s sailing with this boat.

The wind built and built as if trying to get back into my good books after yesterday. The genoa went below with a glow of pride for a job well done and we continued south under all plain sail with 6.5 knots on the log – which I have learned is no more than respectable for Samsara. Of course, I had no idea that this was just the beginning.

By the time we were picking our way through the ferries off Dover, the average was well over seven knots with bursts up to eight – and GPS showing the speed over the ground at 9.5.

Best of all, the shape of a Rival hull makes the most of her speed. That big, purposeful bow shoulders the seas out of the way in the manner of a prop forward making for the bar after winning the league. The result is a great creaming bow-wave and a wake that seems to stretch all the way to the horizon.

Owners of modern boats will sniff at this – particularly those with multihulls. Their argument is: “Do you want to make a lot of waves or do you want to go fast?” Because, there is no doubt, for a boat to go fast, she needs to cause as little disturbance as possible to the sea. But where’s the fun in that…

So, we went belting along the South Coast: Dover, Hastings, Brighton and pretty soon I was indeed looking up those pilotage notes for Chichester. It wasn’t as simple as I remembered. In fact, you have a four-hour window around high water to get in at all.

Also, it turned out that we weren’t going so fast any more and dusk was approaching…  and with it, that characteristic calm: The self-steering unable to cope… the inadvertent tacks, the sails slatting…

It costs £70 to fill Samsara’s diesel tank and I don’t motor anywhere I don’t have to. Down came the sails again and, somewhere off Selsey Bill, I sat down to the other half of the putanesca sauce which had been such a success with spaghetti off Thanet.

Later, as the sun came up and with it the breeze, we set off with a certain sense of resignation for that four-hour window into Chichester.

Obviously it’s going to take me some time to get flexible. Maybe it comes from a lifetime of fitting sailing into a working life – having to get the boat back on her mooring in time to return to the office tomorrow morning. But that doesn’t apply any more. The reason for Chichester was because I needed to take the liferaft to be serviced in Southampton and you can anchor for nothing in Chichester Harbour.

So, when I picked up a mobile phone signal and rang Ocean Safety to book it in for sometime over the next three weeks (I would be around the Solent that long, what with Hugo, my 15-year-old, joining me and having to go home to take our turn at hosting the Wine Club…)

“You want it done in the next three weeks!” said the voice on the other end – not at all the same one which had suggested airily: “Oh, bring it in and we’ll be do it while you wait…”

Eventually, we managed to agree an appointment in early June. But, foolishly, it was only at this stage that I asked how much it would cost.

“£450!” – although, I am pleased to say that a lifetime of listening to people voicing the preposterous allowed me to keep the exclamation mark out of my reply.

The budget just does not allow for routine payments of £450 – and besides the service isn’t due until July – and anyway who keeps their certificate up to date if they aren’t required to by law (charter companies) or if they’re about to be scrutinised for a race?

Besides, I am old enough to remember setting off across the North Sea – five of us in a wooden Folkboat – knowing that if we were to sink, the first resort was a very serious bilge pump Father had installed and the second was a tiny plywood dinghy lashed to coachroof. We would have lasted five minutes in a Force Three.

So the liferaft is not going to be serviced. And besides, the wind and tide seemed determined to keep me away from Chichester. I put the helm down and headed West into the Solent, periodically looking up anchorages protected from the North East.

So that’s why it wasn’t until three in the afternoon that I dropped the hook off Needs Ore Point on the River Beaulieu. I’ve seen boats anchored here before rather than going up to that teeming metropolis, Buckler’s Hard – although I’m a bit startled to read that the owners of this private river (presumably the estate of the late Lord Montague of Beaulieu) reserve the right to come and charge me £10. I just hope they doesn’t read this – that would make me feel as foolish as the drug dealer who advertised his wares on Facebook without realising he had a friend who was a policeman.

Anyway I’m off tomorrow for Poole where Poole Quay Boat Haven will charge me only £3 if I don’t stop for more than four hours while I pick up some fresh supplies, fill the water tanks and buy a new joker valve for the loo before Hugo arrives (It’s taken me this long to find the seacock by feel. If I inflict the same on him, he’ll never want to come back).