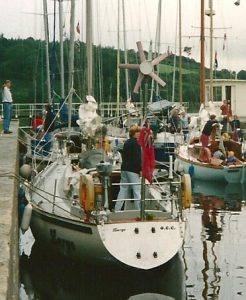 Here’s a picture of my old Rival 32, Largo, in a lock somewhere on the North coast of Brittany, I should imagine. If you look very carefully, you will see the lovely gold line along the rubbing strake.

I always thought it looked like solid gold – which it was… well not actually solid gold but it wasn’t gold paint. It was gold adhesive tape and it had the look of a chunk of gold that had been hammered into the hull all the way down. It looked particularly good against the dark blue of the strake.

Samsara, being the same design, has a rubbing strake too but hers hasn’t been painted. I did think of it but, to be honest, it was a lot of trouble and if I want to paint it in years to come, there’s always the option.

But I did want a gold line. I told Barry Lovell from TLC Marine all about it. I was still enthusing about the solid gold Sellotape when I realised he was shaking his head.

“Nonsense,” I told him. “It lasted for years last time I used it. In fact, I think I only replaced it once in more than ten years.”

“Doesn’t last,” he repeated. “Gold paint. That’s what you want. Gold paint and then when it gets a bit dull, you just go over it again.”

There are many things – in fact most things – on which I would take Barry’s advice. But a gold line is not one of them. With all the passion of someone who is particularly attached to gold lines, I remained adamant and went and ordered a roll of the stuff from the chandlery.

For the next few weeks that gold line was admired many times – not only by people who stopped to nod approvingly as they walked their dogs across the boatyard, but also on Facebook and on any occasion when people were too slow to run away before I found an opportunity to point it out.

Then I made the terrible mistake of putting the boat in the water and going sailing – and, on the very first day, I looked admiringly at the creaming wake … and saw a flash of gold. There, twisting and turning like a very ostentatious mackerel line, was 30ft of gold tape trailing behind the boat.

So we sailed all the way round the West Country and the South Coast looking just a little shabby. However, now that the thermometer has finally reached the 10oC required for painting, I’m pleased to say, the gold line is back.