It all started with the geraniums. I was about to start a 1,200-mile race and somebody gave me a geranium. Now this might not seem particularly sensible but it was a nice thought: Something homely, something that I could love and nurture…

It should be noted at this point that the donor was not a sailor – and certainly not another competitor in the race. But, being the only one taking a house plant, I achieved a certain notoriety – especially considering that the geranium (carefully nurtured in the bookshelf) made it to the finish.

The following year, when the race was 2,400 miles, another well-wisher decided it would be a fine thing to keep the tradition going and presented me with two geraniums. The bookshelf being full of books, this time the extra crew were lashed on to the backstay like mutineers. They didn’t make it past the first gale.

I have never really been sentimental about ship’s mascots. I don’t give a name to the self-steering. There is no gnome in the cockpit as Bill Perkes always used to carry aboard Sherpa Bill. But now, of all things, I have a teddy bear.

It wasn’t my idea. Last autumn, I called into Brixham and met my sister who lives in Exeter. We had a good catch-up and then she produced this. 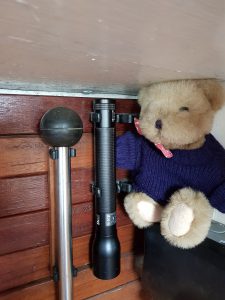 Apparently, our mother had bought it for our father a few days before he died.

And now she was giving it me.

Obviously, I couldn’t just throw it away. Nor could I refuse it. So instead I made appreciative noises and – as soon as she had gone – banished the bear to fo’c’sle with all the sails and the folding bicycle and what-not.

And now, down in the west country once more and due to meet the sister for lunch again, the bear came to mind. I would have to get him out. Apparently, they do this at Buckingham Palace. There is a flunkey whose prime responsibility is to see that any visiting potentate will find their gifts prominently displayed and Her Majesty fully versed in their history.

Me, I just got the bear out and jammed him in a convenient space at the chart table.

And there he sits, looking over my shoulder – and I hate to say this but since he’s been there we have had no major disasters – unlike the months of his exile when, as followers of this blog will be aware, not everything went according to plan.

Now, I don’t talk to him. He hasn’t got a name and if anyone remarks on him, I am very disparaging and explain that he’s really nothing to do with me.

All the same, if we should avoid any more disasters and I am allowed to dismiss him as someone else’s sentimental notion, he can stay.

Stop Press: It’s no good, after some surprising success in the engineering department (well, it certainly surprised me), I found myself referring to the bear as the Chief Engineer. I think he’s a fixture…