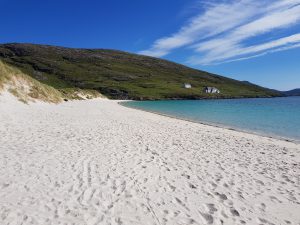 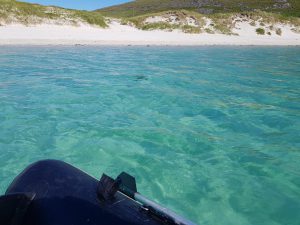 This was a must: The pilot book describes Vatersay Bay as “the finest Sandy Beach on the East side of the Outer Hebrides” and it is fabulous – white sand and crystal clear water that would not be out of place in the Caribbean – and, as you see, not a soul on it.

To give myself an excuse to go ashore (not sure why I needed one), I took the gash (rubbish) with me and walked up to a little group of houses. After the beach, they were a bit of a disappointment – somewhat shabby prefabs with a temporary air about them. But then, until 1991 when the causeway to Barra was completed, building materials had to come by boat.

Of course, the whole Island has a complicated history when it comes to settlement. Until 1906 it was left to the birds and seals but then, men from Barra landed and claimed they were exercising their ancient rights to the land. However, the owner of Vatersay, one Lady Gordon Catchart, would have none of it and took them to court. Despite massive public support, “The Vatersay Raiders” were sentenced to two months in prison.

But Lady Catchart’s heart seemed to have gone out of the fight and she sold the island to the wonderfully-named Congested Districts Board which allocated crofts rather in the way West London councils allocate allotments.