I can tell you two things about St Kilda. All the people left 1930, unable to cope any longer with the hard life on this desolate piece of granite 60 miles out in the Atlantic.

Secondly, part of the reason was because the island’s gene pool wasn’t what it was: For hundreds of years there had been a tradition that if a young man could climb to the top of the gigantic sea stack which rises hundreds of feet out of the ocean next to the largest island, stand on the stone at the top, join his hands in front of him and then jump through the hoop made by his arms without falling off and plunging to certain death, then for one night he could have the pick of all the women on the island.

It was great for the young men. Who knows, some of the young women might have been quite keen too: A man who could do all that must have seemed like Justin Bieber and Brad Pitt all rolled into one. In fact, if it hadn’t been for the arrival of the Rev John MacKay in 1865, this resilient micro-community might still be there, subsisting on sheep and seabirds and defying the outside world. But even before the new minister got around to banning the singing of anything but psalms, dancing, games and storytelling, he put a stop to the heathen practices on “The Mistress Stone”.

So, dropping anchor in Village Bay, you might forgive me some preconceptions. After all, the pilot book makes much of the “comprehensive by-laws” of this World Heritage Site, the necessity to seek permission to land from the warden…

Undoubtedly, it is a fascinating place: The old houses are still there – and the original “blackhouses” without windows or chimneys where the people took what shelter they could with their animals to keep them warm when the peat gave out – and, then, of course, there is the quaintly named “street” – the new houses built in the mid-1800’s: Two windows and a chimney…

If I’d read up about it properly, I would have known that’s not the whole story: Since 1957 there has been a handful of MoD personnel manning the radar station over the hill but as far as I imagined, it was just the warden living in the Reverend MacKay’s old Manse next to the kirk. What an amazing existence…

The idea of spending a couple of days anchored in the bay, sharing the warden’s solitude was too much to resist – and exactly two weeks after leaving Suffolk, the anchor went down in Village Bay. In I could see it, six metres down in water clear as air.

More chain rattled over the gypsy, full astern with the engine to dig it in and then switch off.

You know that annoying sound which large earth-moving vehicles make when they reverse – that they make incessantly because they’re always reversing?

Well that is the sound of St Kilda today.

It just so happens that, now the World Heritage people have seized on it, the place has to be done up – which means that now it is not only home to the warden and the MoD but also about 25 construction workers living in a row of green Portacabins.

There are hoardings with artist’s impressions of how the St Kilda Accommodation and Infrastructure Project will be in keeping with the ambience of this historic location (once they’ve torn down the hideous power station and taken away all the Portacabins).

In the meantime, there’s quite a community. John Sikorsky, who calls himself the Ranger, not the warden, has a Seabird Ranger as well – and an archaeologist. Altogether, you have almost as many people as the 37 islanders who were evacuated to the mainland all those years ago.

Their names are written on slates in the fireplaces of their old houses – and in the kirk, on the open page of the Bible, there is the list of deaths from the 1870’s – mostly in infancy.

For £190 you can take a high-speed trip from Harris – two-and-a-half hours each way which leaves five hours on the island. Actually, that’s plenty. The gift shop doesn’t take long.

There was also what appeared to be a converted fishing boat which took eight passengers on a sort of mystery tour – the mystery being that the skipper would decide on the destination only after listening to the forecast.

Or you could join a cruise ship. Yes, they call at St Kilda. John the Ranger goes aboard to give a briefing and warn the passengers not to leave the village. Not only are there no fences or warning signs to stop them falling off a cliff but, if the weather turns, that’s 300 people who have to be ferried back to the ship before the swell threatens to capsize tenders at the pier.

It hasn’t happened yet but, just thinking about it, where would you put 300 cruise passengers for a night on St Kilda? The Blackhouses? There are plenty of sheep to keep them warm… 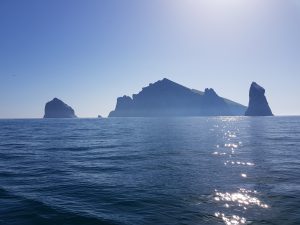 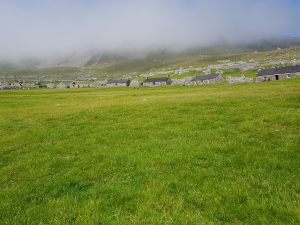 The new houses built in the mid-1800’s – every modern convenience (chimneys and windows). 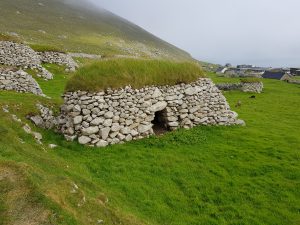 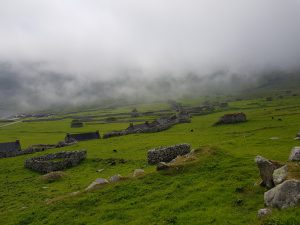 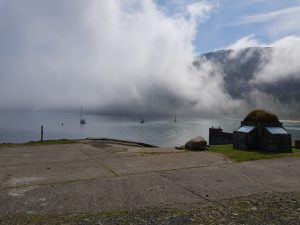 One Response to St Kilda