Petit Becaye isn’t much of a bay. The pilot book describes it as “so small that four boats would be a crowd” and advises you to take down your sails before entering – but I forgot that bit.

Anyway, I am the only one here. I don’t think I’ve had an anchorage to myself since arriving in the Caribbean – or, come to that, leaving the east coast of England.

But Petit Becaye Bay has more surprises than you would imagine from the fifteen lines it merits in The Sailor’s Guide to the Windward Islands.

For a start, there was the extraordinary sight of hundreds – literally hundreds of little white birds sitting on the water all around the edges. They appeared to be waiting for something – certainly, they didn’t get up and fly about. They didn’t swim or dive for a meal. Their friends didn’t come and join them.

It was only when I had set the anchor and examined them through binoculars as if I was a proper bird-watcher that I realised that in fact, they were the upended bottoms of hundreds and hundreds of small white plastic bottles. It appeared I had stumbled into some sort of rudimentary fish farm.

Never mind, I had business to conduct. I had to get to the Foodland supermarket up the road – at least, I presumed there was a road. I needed bread, and I needed sugar. Would I have come to Petit Bacaye Bay for any other reason?

I was just as well I did have a reason. On the beach – well, the landing place which was a small patch of sand between the rocks, hardly wider than the dinghy so that you had to scoot in, fold the oars and hop over the bow in one smooth movement – stood the King of Petit Becaye Bay.

Since, as I said, it isn’t much of a bay, it doesn’t have much of a king. But Robert Mitchell put it like this: “This our bay. What you doin’ here, man? We need to know who comin’ in our bay. You got permission comin’ in here? Anchorin’ an all?”

The effect was rather spoiled by the four henchmen standing behind him, who were all grinning, rolling their eyes, shaking their heads and sending out vibes which said only too clearly that everything was cool. Robert was just doing his thing. Let him have his fun.

Better still, I decided, was to show some genuine interest in Robert and his fish farm. Besides, I really was interested – and before you could say: “I have a cruising permit issued by the Grenadian Immigration Department,” he was telling me all about Sea Moss.

That’s what they were growing here on strings attached to all their plastic bottles – what the health food trade knows as Irish Moss. I’ve looked it up. It’s a superfood. It is claimed to be good for everything from cholesterol to the immune system to a healthy gut.

Meanwhile, I had to get to the shop. I would never find my way back in the dark.

Actually, I couldn’t find my way there in the daylight and ended up being invited to take a shortcut through a garden – and then the neighbour’s garden. I did get the bread, but forgot the sugar.

More importantly, on the way back, I picked up some Sea Moss.

There was a little man sitting beside the road with a big tub of the stuff. I suppose he was sorting it. I stopped to ask but, honestly couldn’t make head or tail of what he said – so it was just as well that Robert came by with his friends to do the sales pitch.

I should cook it and put it in a blender and mix it with milk. For sure, I should try it. I could mash it up with a fork. I bought what has turned out to be a year’s supply.

Returning to the boat, I did some more research: Apparently, I should be using it as a thickener for milk products, specifically ice cream – although its slimy texture and fishy taste could be off-putting.

And it does have possible side effects: fever, nausea, vomiting and diarrhoea, not to mention a burning sensation in the mouth, throat and stomach

As if that isn’t bad enough, sea moss may accumulate toxic metals such as arsenic, mercury and lead. I don’t think I’ll be consuming enough to overdose on its iodine content and get goitre.

I’m not too sure about this – even though there’s a pan of it simmering on the stove and a whole basin-full in the cockpit, plotting.

If you don’t hear from me again, blame King Robert.

Postscript: After 25 minutes simmering in the pan, the sea moss had reduced to a jelly-like substance which can only be described as “snot-like”. As to the smell, it reminded me of the scent of a decomposing squid the dog found on Padstow beach one hot summer’s day. I tried to wrench him away from it, but he had his nose deep in the putrid entrails. When I could hold my breath no longer, I had to leave him to it.

He was sick later.

The sea moss has been returned to the sea. 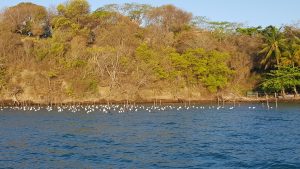 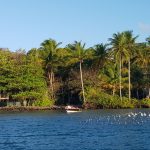 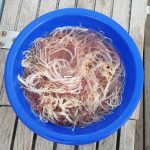 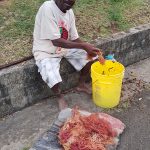 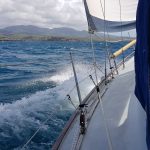 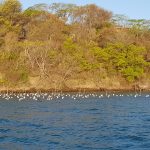 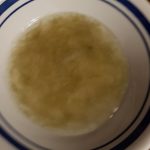 11 Responses to The health benefits of Petit Becaye Bay