When a seabird wants a rest, it just lands on the water. How convenient. You can see them sitting happily on the roughest seas. Only when a breaking crest threatens to swamp them do they lift off and fly to another, untroubled patch of water – sometimes it’s just on the next wave.

But that’s fine for seabirds – they are among the very few species that can do everything: Swim, walk and fly.

But what about a land bird faced with a vast expanse of open sea beneath it? What about Pidgy?

Of course, the original Pidgy landed on board Francis Chichester’s Gypsy Moth III during the first Singlehanded Transatlantic Race. He fed her and made her a nest in the cockpit cave locker – she stayed for days and made a dreadful mess of it.

She was a racing pigeon and she was lost. They do get lost sometimes – and some never return home, flying instead in the wrong direction across featureless oceans until they can fly no more and fall out of the sky to drown.

Lyme Bay, off the coast of Devon, is not quite the Atlantic Ocean but there, sitting on the sprayhood, displaying a certain haughty sense of “what are you going to do about it?” sat a pigeon.

Birds on boats are not uncommon – anything that provides a safe haven in the middle of miles and miles of inhospitable water is going to get colonised – after all look what happens to places like “Gannet Rock” in the Channel Islands.

It appears that Pidgy, looking down and seeing Samsara making her way sedately from Torquay to Poole, had the same idea.

So, when I poked my head up to have a look around, there she was, perched on the sprayhood. It’s happened with sparrows and thrushes: Tiny unidentifiable bundles of feathers have all had a ride over the years – but this latest arrival did not scamper away when I popped up. In fact, she was quite happy to be stroked with a finger. But then, this was no ordinary pigeon: Round her legs were two rubber bands stamped with numbers. Like the original Pidgy, this was a racing pigeon.

We set about getting to know each other. From the very beginning, I assumed she was a girl (on account of her very fluffy bloomers and beautiful green necklace). She accepted a drink – and then another. But she scorned the ship’s shop-bought sliced bread.

We were getting along so well that I thought I might mention that if she wanted to make a mess, then the clean canvas of the sprayhood was perhaps not the best place – which may be why, five minutes later, she did just that.

I would have liked to ask her where she was going – how long she intended to stay… but for that I would have to talk to her owner. It was not until I picked up a 4G signal near Portland that I looked up her numbers on the Welsh Homing Pigeon Union website and ended up talking to Gerald Thomas in Merthyr Tydfil.

Mr Thomas is 79 years old and has been racing pigeons for as long as he can remember.

He is not a sentimental man (he doesn’t give them names (and certainly not Pidgy, given that he has 60 of them) and he is philosophical when one of them is late home: “Oh, I expect he’ll  turn up when he finds his way..”

So Pidgy is a boy, then.

“We sent them to France to be released this time. Usually we send them to Belgium. Maybe he went to Belgium first because he knew his way home from there.  But it’s very good of you to give him a drink and let him have a rest.”

Somewhere near Portland Bill Pidgy left to continue on his way. When I looked out, he just wasn’t there any more.

He’d left behind him another mess for me to remember him by. 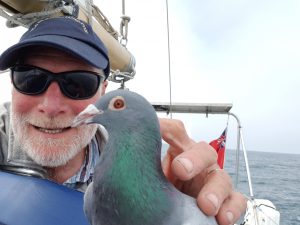 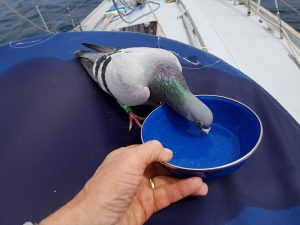