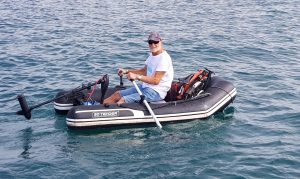 What does an old man, sailing on his own, do for an outboard?

Well, l’ll tell you what a young man does – at least, what I did when I was in my 40’s on Largo: I had a little two-stroke Suzuki and I took it in one hand and climbed into the dinghy with it, swinging it around as if it weighed no more than a can of extra strong lager on a Saturday night.

So, when I started sailing alone again as an old man, I bought another little two-stroke Suzuki (it wasn’t easy – they don’t make them any more because of the emissions).

However, nothing else was the same. Somewhere over the intervening 30 years, my muscles had disappeared. My little stick-thin 72-year-old arms can no more lift an outboard than my head can cope with extra-strong lager. I could see that it would only be a matter of time before both of us ended up in the water – which do no good at all for the outboard (and not much good for me).

All of these changes have come together to contrive what I believe is a very neat solution to the problem of getting ashore, saving the planet and keeping the beer cold (the 3.8% Heineken).

At the end of last season, I was going home for Christmas and had everything loaded into the dinghy ready for the two-mile trip up the river to Waldringfield.

You will probably remember last Christmas and the prospect of it being cancelled with another lockdown: If I had the boat hauled out as I usually did, it might be moths before I got back into the water. Instead, I borrowed a friend’s mooring at Ramsholt.

When I say I had everything in the dinghy, I mean the bicycle and everything I could get on it for the five-mile ride from Waldringfield to Woodbridge. That is to say, I had my rucksack and the carry-on bag which just about fits on the front.

The dinghy, with its pump, outboard and oars etc. could stay on the beach. I would come back for them later in the car.

You can see, I had thought this through.

The only thing I had not considered was the outboard failing to start.

Which was why I was a day late home for the holidays – having had to wait for the following day’s flood tide (you don’t row a tiny inflatable for two miles against the River Deben’s three-knot ebb.)

It was pretty much the final straw for me and the outboard. Over the years, I had spent hours with it in pieces in the cockpit. I had pored over YouTube videos on how to service a carburettor. I had spent enough on repairs,  practically, to buy a new one…

There had to be an alternative. Well, of course there was. I could have an electric outboard. They come to pieces. You can load them into the dinghy one bit at a time. They don’t break down. They need no maintenance. They’re kind to the environment. You don’t have to find somewhere safe to store the petrol (or buy it, come to that). What I needed was an electric outboard.

The only problem was that the ones made for the yacht market cost the predictable arm and leg.

But there was an alternative. It was called a “trolling motor” – designed for little boats on lakes. Top speed is about three knots and you need a 12-volt battery to power them. But you could get a brand new one for less than £150. Best of all, they weighed only 7kg – I really would be able to swing it around in one hand.

I’ve had it for a year now. It’s called a Haswing  Osapian 40 and I have an 80ah “marine and leisure” battery which plugs into the ships’ batteries to recharge (and when it’s not running the outboard, it pushes the little electric beer-cooler.)

The battery does weigh 17kg and has to be lifted in an out of the dinghy but it’s compact and has a proper handle and somehow that makes it manageable.

Obviously, you have to learn to think like a WW2 submarine captain – you can go further if you go slowly – about three miles, I reckon. But in emergency top gear, it has pushed me across Falmouth Harbour against a 20knot headwind.

So why does that picture at the top show me rowing?

It was taken in the enormous anchorage at Las Palmas, Gran Canaria, where it’s the best part of a mile into the marina and all the way down to the other end to the dinghy dock – or five minutes in a RIB with a 10hp four-stroke which two people had to hoist aboard with a purpose-built derrick.

Although, I did notice that in between the criss-crossing wakes, there would be the occasional little old man rowing a tiny cockleshell dinghy. It would take him twenty minutes – but old men are seldom in a hurry.

I’m an old man – and my little electric trolling motor in low gear would take me all of twenty minutes.

So why wasn’t I rowing?

The upshot is that now I have new, longer oars and stainless steel rowlocks in place of the broken plastic ones. Admittedly, I still can’t punch into a 20knot headwind like a rigid dinghy – or even a collapsible one – so, when there’s the prospect of a strong headwind, I take the motor just in case. Then I can clamp it amidships and set it to half-speed and row with a little help. It’s like pedalling uphill on an electric bicycle.

My biceps are coming along splendidly…

11 Responses to Oars and outboards