How to eat a whole tuna in 24 hours

“You like fishing?” asked the man on the quay at Calheta.

Then he thought about it. Evidently that wasn’t quite what he meant.

Yes, certainly I like fish. However, I was a bit tired of fishermen, having been roused twice in the night to shift further down the quay at this tiny Azorean harbour in order to make room for the two fishing boats from Madeira which had called for an overnight stop and to top up with water.

Fishing boats use an inordinate amount of water for their icemakers. Indeed, part of my night was spent feeding a line from their boat, outside my boat, to the water tap opposite so they could haul their hose across – and as far as I can tell the two of them had it running all night.

And here we were at eleven O’clock in the morning and it appeared to be still running – and if I was going to get a beer in the Café Sport in Horta tonight, I ought to be leaving.

The fisherman motioned me to come with him which meant scrambling up a chain onto a huge cylindrical rubber fender and thence with a heave like exiting a swimming pool, onto the quay – not dignified but then the quay was designed for vessels considerably bigger than Samsara.

By the time I made it to the fishing boat, the skipper – for he appeared to be the skipper – emerged with a tuna to feed a family of ten.

Here I patted my very small stomach of which I am inordinately proud.

“Is small,” said the skipper. “The most small.”

Back on the boat, I looked at the size of the fish again. Then I looked at the size of my fridge – which is only ever used for beer and the occasional left-over if the engine is running or the sun shining long enough for the solar panel to keep it going – or if we happen to be bowling along at five knots and the water-generator is doing its stuff. 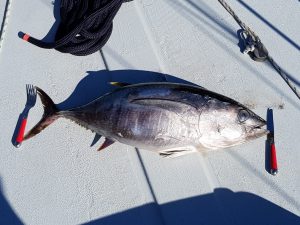 There was nothing for it: The fish would have to be butchered then and there – and I wasn’t going to do it on the boat. I’ve seen how much mess you can make with a mackerel on a boat. This monster was going to bleed everywhere.

Not for the first time, I thanked Dr and Mrs Franklin, Samsara’s owners back in the 90’s who made such clever modifications as turning the top of the engine casing into a massive, removable chopping board/cup holder. It turned out to be just big enough to chop a baby tuna into the three biggest tuna steaks I have ever seen. Honestly, these were massive. Each one would feed three people – but I didn’t see the point in having any more. It wasn’t as if I had a freezer like Bill and Laurie aboard Toodle-oo. I met them in Ponta Delgada – but they were from the USA and had a freezer (actually they had their own washing machine because Laurie didn’t trust marina launderettes – I hadn’t liked to mention my bucket).

Anyway, clambering up and down for a bucket (the laundry bucket now on fish-gutting duty) and waving goodbye to the fishermen who finally reeled in their imprisoning hose, we set off – Samsara, the fish and me – for the 25 mile trip to Horta.

And thank heavens for the fish because, without it, we would still be on the way…

You see, I am in the Azores and so is The Azores High. This is the meteorological phenomenon which we hear about so much on the British weather forecast because of the effect it has on the British weather. Out here it just means the wind doesn’t blow – and if you happen to be becalmed half way up the Sao Jorge Channel which is 40 miles long but only ten miles wide and full of all manner of traffic, that is just plain stressful.

But on this occasion, it was an easy decision to switch the engine on – even with the cost of diesel what it is: I had fish to keep fresh…

Actually, the first steak was in the frying pan within an hour – served with couscous and parsley. I have never before eaten a tuna steak which fell apart on the fork before. But then, I suppose it was fresher than any tuna steak I have ever eaten before. I mean, this one didn’t even get to the fish merchant, let along the fishmonger… 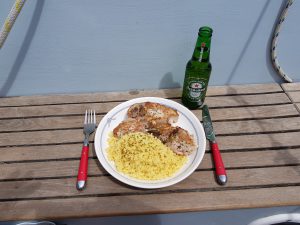 The second steak for dinner caused a bit of a problem: I had looked up recipes and had settled on baking it in foil with lemon and capers to an accompaniment of pasta and green beans.

Duly arriving in Horta (a lifetime ambition incidentally) I set off to walk around town following Google Maps in search of a lemon.

How can a whole town – in a region famous for its pineapples – not possess a single lemon? I tried three shops including the big supermarket. In the end I made do with a lime.

This would not have been so bad if, becoming obsessed with lemons, I had not forgotten about the green beans … then excavated the kitchen foil only to find it had amalgamated itself into a solid block of aluminium. The frying pan came out again. 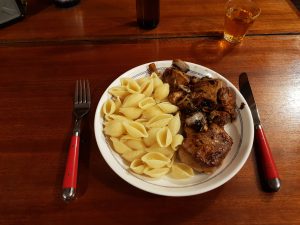 I don’t mind telling you that I was not looking forward to tuna steak for breakfast. It had seemed like a good idea while enthusing over tuna with capers and lime (and a massive slug of soy sauce) but with the heat already building at eight O’clock in the morning, a few slices of water melon did seem appealing.

But actually, once the beast was on the plate with a pair of fried eggs and the ketchup bottle… 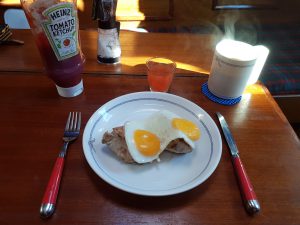 I do have a confession, though: I kept back half the last steak. It’s cooked now – and with the fridge hooked up to the marina electricity, it should keep long enough for a tuna mayonnaise sandwich.

That’s if I ever want to eat tuna again…

Well, the fish has finally gone. I couldn’t face it again last night – in fact I couldn’t face any more protein at all. What I really wanted was a huge plate of green vegetables (and would you believe I couldn’t find any fresh green beans anywhere – had to eat a huge pack of frozen).

,,, and so, finally, I was ready for tuna mayonnaise for lunch: 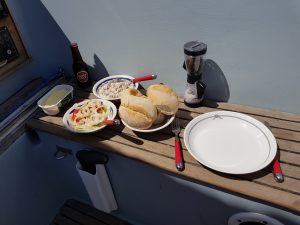