The anchor windlass has now worked perfectly half a dozen times in a row. I cannot tell you what a relief this is.

I may have mentioned that last autumn, on the trip round from Wales to the English East Coast, periodically it would simply refuse to move: All I got on pressing the button was a loud “click” and I became really quite adept at cranking the anchor up by hand.

However, this was a long and laborious process and I worried about the prospect of having to get out of an anchorage in a hurry: Once you have raised enough chain to break the anchor’s hold on the bottom, then a gale blowing onto a lee shore will have you on the rocks before you can get the thing on deck.

So as soon as I stopped in Woodbridge, Art Butler of Deben Marine came and puzzled over it: Since it sometimes worked and sometimes didn’t (there appeared to be no pattern to it) he surmised that this must mean there was a bad connection somewhere. I cleaned up a very rusty bolt in the anchor locker, he removed a wonky isolation switch and replaced the 80amp circuit breaker with one of 100 amps. It didn’t make the slightest difference.

I talked to the UK distributors of Lofrans – a firm called A R Peachment in Norwich. They were very helpful and listened sympathetically. They couldn’t really offer much by way of explanation (although a sharp tap with a winch handle was mentioned at one point). Ultimately, all they could offer was to send an engineer to look at it. There was a long waiting list and it would be expensive. Alternatively, if I would like to remove the windlass from the foredeck and deliver it to their workshop…

It was when Art had visited me on the Orwell while I had my anchor chain wrapped round the mooring (q.v.) that we discussed the options. He had just fitted the new contact breaker. I never thought that was the problem because the old one hadn’t tripped. Anyway, Art mentioned that sometimes electric motors didn’t work if they had stopped the previous time with the commutator contacts on a duff spot.

The mention of something as technical as a commutator juxtaposed with a “duff spot” offered an entirely new avenue of investigation. First of all, I had no idea what a commutator was.

For those untechnical people like me, here is what Wikipedia has to say about commutators: 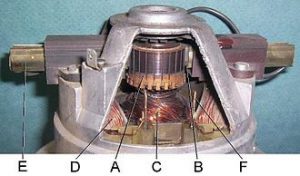 A commutator is a rotary electrical switch in certain types of electric motors and electrical generators that periodically reverses the current direction between the rotor and the external circuit. It consists of a cylinder composed of multiple metal contact segments on the rotating armature of the machine. Two or more electrical contacts called “brushes” made of a soft conductive material like carbon press against the commutator, making sliding contact with successive segments of the commutator as it rotates. The windings (coils of wire) on the armature are connected to the commutator segments.

As you can see from the picture, the segments of the commutator are made of copper and are properly copper-coloured. We took the back of the casing off the windlass and inspected mine. They were black – jet black.

Art searched through one of his two enormous toolboxes and came up with something that looked like a small screwdriver with a little blob of some sort of material on the end.

“Fibreglass”, he explained. “Good for cleaning things in inaccessible places.”

Laboriously, he cleaned each segment, turning the motor as he did so until they were all copper-coloured again.

And it has worked without fail ever since.

I phoned A R Peachment again (I needed a new gasket anyway). I explained the remedy. The technician I spoke to sounded most interested. I suggested that next time he had a call from a desperate customer, he might like to suggest this as a first resort.

The trouble is that I’m not sure he believed me.