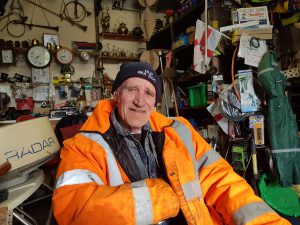 There are three things Roy Marshall likes to do.

He likes to spend his mornings sitting in his Aladdin’s Cave of nautical junk and wait for people like me.

He likes to raise money for the Lifeboat.

And he likes to talk.

I’ve been in Oulton Broad, just up the lake from Lowestoft for five weeks now – or at least Samsara has while I went home and took my youngest skiing. But I’ve spent enough time here to get to know a bit about Roy.

It started off when I messed up the delivery address for a parcel and Roy took it in. A condition of Roy taking in parcels is a pound the Lifeboat box – but that entitled me to a 25% discount on a snap shackle.

Then I went back and donated my old anchor connector. After that, it was a hawse pipe for an aneroid barometer. Places like this can become addictive.

Roy hobbles about his treasures, knowing exactly where he can lay his hand on a 9mm bulldog grip or a tank for a 1968 Seagull.

He hobbles thanks to a kicking he got from a pair of visitors at HM Prison Blundeston. They were busy delivering a consignment of heroin when Roy, as the prison’s security officer, decided to confront them.

Roy isn’t worried about confronting anyone – it might have something to do with boxing for the Navy in his youth (Combined Services Light-Heavyweight Champion, 1975).

All this I learned while sorting through anodes and clevis pins and full-flow ball valves and a complete stern tube lubricator.

“I had a bit of a reputation for being aggressive,” he remarked as if talking about the weather. “That’s why they made me the gunner in the Falklands.”

The gunner. Not a gunner?

Yes, the Admiralty had posted him to a requisitioned trawler. They took off all the fishing gear and refitted it as a minesweeper – but most of the time Roy and his shipmates ferried the SAS and the SBS around South Georgia. The trawler didn’t have any armament when they started out. But then, in view of what they were getting up to, the powers-that-be found a spare 20mm cannon and gave it to Roy so that he could blast away at the Argentinian bombers in San Carlos.

“Never hit a sausage, though.” he said. “But then nor did they, most of the time. They’d fitted propeller fuses to their bombs and then came in so low that there was no time for the propellers to spin long enough to arm the explosive. Most of the bombs just bounced off.”

So how much has he raised for the Lifeboat?

He pulled out a sheaf of receipts: “I’m the third highest donor…”

Good for you, Roy!