The explanation for not getting up – not the excuse (there’s no excuse) – is that there’s still 300 miles to go to The Lizard, the nearest I’ve come to a ship in the last ten days is 11 miles and there had been not a breath of wind since teatime yesterday.

So there didn’t seem much urgency about the alarms.

Don’t get me wrong, I’m not a lazy sort of person. You won’t find me lying on the sofa surrounded by empty beer bottles and decomposing pizza boxes watching daytime TV. Indeed, I would like it known that One O’clock this morning found me struggling into foul weather gear while the cabin rolled through 40 degrees. It had been raining for most of the day and there is a saying:

If the rain before the wind,

If the wind before the rain,

Soon you may make sail again.

It is surprisingly accurate but does nothing to tell you what will happen if there is no wind. I feel there should be another couplet:

If the rain is all you get,

Sorry mate, you just get wet.

Anyway, at one in the morning there was a breath of wind – only about three knots which, normally, is not worth bothering with. But if I could manage to turn the boat round and head in the right direction, the wind would be from dead astern – and that means that if I had the downwind rig, we could do two or three knots (still rolling like a pig, of course. But rolling and going somewhere is a lot better than rolling and going nowhere).

So, for the best part of an hour, I faffed around with a head-torch rigging two booms, the temporary forestay, the staysail and cruising chute and the eight control lines that little lot requires. The windvane took over and after sitting in the cockpit watching us gliding silently over a flat sea, I settled down for a peaceful night of progress with nothing to disturb me but the alarms every 90 minutes.

Of course, a singlehander sleeping for 90 minutes in the English Channel would never do. But out here (especially with the AIS* running) you could probably sleep all night and not come to grief. No, the reason for the alarms is in case the wind changes – the last thing you want is to poke your head out of the hatch in the morning and find you’ve spent the last six hours going in the wrong direction

Or… in this case, you find that by 3.30 a.m. the wind has dropped again and the boat is going nowhere. Well, not quite nowhere: The effect of the endless rolling is to make the sails act like a bird’s flapping wings. It does produce just enough drive to keep the boat moving at about half a knot. With fore and aft sails, the wear on the canvas is not worth the progress – but my two headsails, firmly tied down to their booms waft gently back and forth without any of the cracking and banging and worries about the stitching…

At five O’clock the alarm said “It’s Five O’clock” (my alarm speaks, now). However, the boat was still rolling and from the perspective of my sleeping bag, nothing had changed – in which case actually getting up would be nothing more than an inconvenience. So, I didn’t.

I think what I need is an alarm which says: “It’s five O’clock and the wind has sprung up but from exactly the opposite direction. If you get your arse out of bed and bother to take a look, you will find the boat is gliding silently over a flat sea at three-and-a-half knots in the wrong direction.

When I did, finally, get up at half past eight, we were nine miles further away from our destination than we had been when I went to bed.

Worse still, the wind had died again so there was not even hope of making up the loss – and when it did come back, it was from the North East! Exactly where I wanted to go…

It wasn’t until midday that we were back to where we started. In other words, I had lost about 12 hours.

As I write this we are back on course at three-and-a-half knots but it will be another few hours before the errant bit of track drops off the plotter screen and stops accusing me.

*AIS: Automatic Identification System. The ship transmits information about itself (Name, course, speed, destination etc). This is received by vessels within VHF range of about 20 miles. The device can sound an alarm which means I know a ship is approaching before I can see it which makes life so much less stressful… 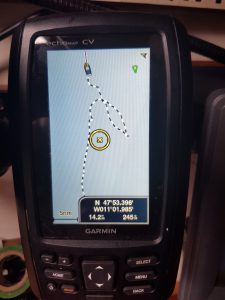 I can’t pretend it didn’t happen. The plotter cannot lie – and clearly shows all the progress lost while I was asleep!