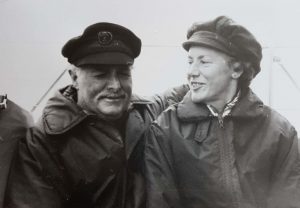 My parents (Mother is saying that Force Six is a “yachtsman’s gale”. Father isn’t listening)

Mother had a rule: If there was a gale warning on the Shipping Forecast, we didn’t go out.

Actually, we didn’t go out in Force Seven either, in case the Shipping Forecast had got it wrong.

And, just in case Father started getting ideas, Force Six was categorised as “A yachtsman’s gale”.

It wasn’t until I was 18 and we were ambushed by a completely un-forecast “hurricane” off the Ile de Batz and spent the night in survival mode, that I discovered what all the fuss was about.

I suppose it was inevitable that, over the years, the idea of Force Eight should lose its terror. All the same, when it came up on the shipping forecast in the middle of the passage from Poole to the East coast, there was something instinctive about hunting through the almanac for a bolt-hole.

Since the route had taken us round the back of the Isle Wight, this didn’t leave a lot of options: The only safe haven with any water in it – and enough water over the entrance when I needed it – was going to be Portsmouth. It was only about 15 miles away and I could pick up a mooring (getting gale-bound in a marina can be ruinously expensive).

In fact, I had spent an hour back-tracking before I started thinking of this logically: Already, I knew I was in for a hatful of wind. The picture on Windguru was distinctly red. But on the other hand, there was no sign of purple which is what they use for gales. Moreover, the nastiness seemed to concentrated in mid-channel. If I stuck to the coast, it looked as though I would find nothing worse than 20knots which is, what… about Force Five.

Besides, an offshore gale is a lot less menacing: Years ago, I took three teenagers off for a week. I had never met them before and knew only that they could sail dinghies – they had been volunteered on me by my old school’s sailing club and their “get them into bigger boats” program.

The week coincided with a week of gales but I could hardly send them home (their parents had probably nipped off for a mini break). Nor did a week gale-bound seem attractive, cooped with three bored teenagers.

So, we tied down two reefs and went out every day to thrash around the Solent. Largo, being a Rival 32, thrived in a blow. One way and another, it was a fantastic week. We visited five different harbours, dried ourselves out each evening over my pasta-and-tins repertoire and got to know each other very well indeed. Boring it was not.

Well, now I have another Rival 32. And Samsara’s sail plan is even more suited to a blow than Largo with her too–big furling genny.

So, I dismissed Portsmouth, turned round and resumed the course – and guess what? The next forecast talked only of “possibly gale eight” – and that was for the whole sea area, all the way to the French coast.

And what did we get? Nothing more than 22knots apparent. What the forecasters might have called “occasionally Force Six”. In fact, the wind fell lighter and lighter until we ended up becalmed and going backwards off Dover – only the heaviest concentration of shipping in the world…

It was oddly peaceful.

Stop Press: The following morning the Dover Lifeboat turned up to check that I was all right. Apparently they don’t get many people anchoring for the night on the Goodwin Sands – someone had seen me from the shore and reported that I was “not making way”. The Lifeboatmen were terribly polite. I told them that I’d once been advised by an old fisherman that if ever I wanted to anchor without the risk of anyone disturbing me (or worse, running into me), I could do a lot worse than a sandbank.